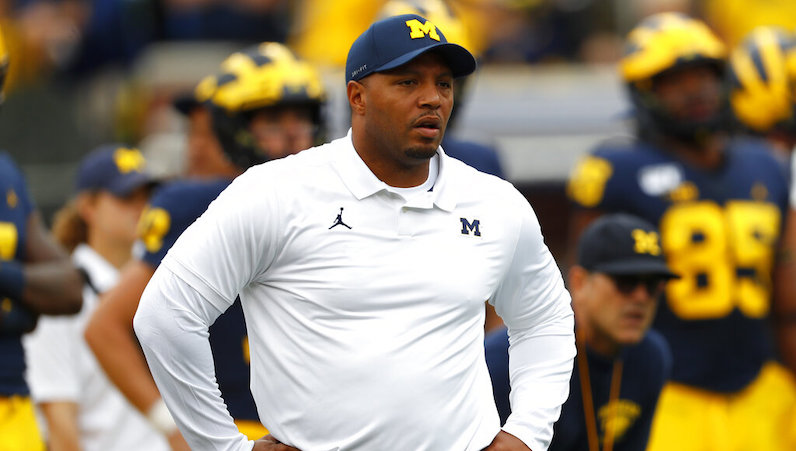 Josh Gattis is back in the ACC. After three seasons with Michigan football, Gattis will head to Miami and become the program’s next offensive coordinator, replacing Rhett Lashlee. Gattis will also coach the wide receivers.

This is obviously a major get for first-year head coach Mario Cristobal. Gattis won the 2021 Broyles Award, honored as the top assistant coach in college football.

Back in early December, after much speculation, Cristobal was hired away from Oregon. For two months now, the program pushed forward without an offensive coordinator, although there seemed to be some potential last month with Kendal Briles.

Regardless, Diaz prioritized recruiting; he hit the ground running, both on the prep level and with graduate transfers. That patience paid off big time, too.

With Michigan uncertain about the status of head coach Jim Harbarugh — who interviewed for head coaching positions in the NFL with Miami and Minnesota — it seemed like Gattis had a chance to become the program’s next head coach. However, things shifted quickly with those two NFL positions; Harbaugh elected to return to Ann Arbor.

Now, Harbaugh must start back over — sans his ace offensive mind.

Gattis, 38, grew up in Durham — just off Tobacco Road. After a star-studded prep career, Gattis emerged as a key defensive star for Jim Grobe at Wake Forest. During the 2006 season, Gattis (82 tackles, five interceptions) helped power a defense that pushed Wake Forest to an ACC title.

Back in 2010, Gattis also spent a season as a graduate assistant for Butch Davis at North Carolina. Since then, he’s rapidly climbed the coaching ranks. In fact, Gattis was in consideration for the head coaching job at Virginia — before Tony Elliott finalized a deal.

Gattis was already well-compensated as assistant coach — both at Michigan and during his time with Alabama. However, the Miami opportunity will see a drastic increase to his salary. (Mike Ryan, the executive producer of The Dan La Batard Show, who is plugged in with the inner workings of Miami football stated the Gattis would make upwards of $2 million annually.)

Once again, there’s a lot of money around this football program, and it’s being spent in larger sums than ever before.
<!–-nextpage–>

During the 2021 season, Michigan shocked the college football landscape; the Wolverines boosted an electric rushing offense, which finished the year as the No. 16 in scoring offense (35.8 points per game). According to ESPN, Michigan ranked No. 8 nationally in adjusted offensive efficiency. Gattis is credited with modernizing Michigan’s offense.

Small consolation, but I really really like how Josh Gattis called these last 6-7 games for Michigan. Really curious about him/them next year if (IF) they can stretch the field a bit more.

As such, Miami’s running back should be ready to roll. There’s a lot of talent in that position room, too: Jaylan Knighton, Donald Chaney and Thad Franklin, who averaged just under 7.5 yards per carry in 2021. Not to mention: last month, Miami landed Ole Miss transfer running back Henry Parrish. Parrish averaged 5.3 yards per carry in the 2021 season.

The most exciting angle for the arrival of Gattis relates to the quarterback position. Gattis is a skilled play-caller; he’ll now get to work with talented sophomore quarterback Tyler Van Dyke.

The 6-foot-4 Van Dyke was excellent as a true freshman. Despite the challenge of taking over a so-so offense in the middle of the season, Van Dyke completed 62.3 percent of his pass attempts, while throwing for 2,931 yards, 25 touchdowns and only six interceptions.

Over the final six games of the season, Van Dyke threw for 300+ yards and 3+ touchdowns in each contest.

Gattis and TVD should make for one of the most dynamic coordinator/quarterback duos in college football for the 2022 season.