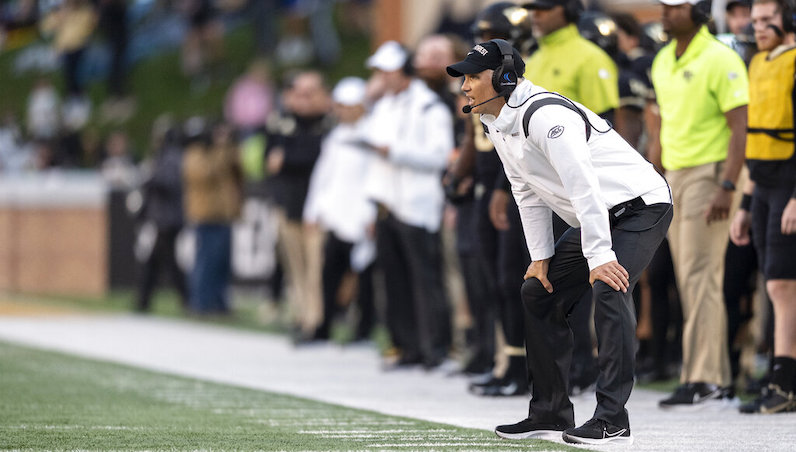 Wake Forest head coach Dave Clawson looks on from the sideline during the second half of an NCAA college football game against Duke on Saturday, Oct. 30, 2021, in Winston-Salem, N.C. (AP Photo/Matt Kelley)

Week after week, Wake Forest continues to get it done. The undefeated Demon Deacons face an interesting road ahead over the next three weeks: at UNC, home to NC State, at Clemson. There’s still plenty to accomplish for Dave Clawson. For now, though, it’s totally fine to admire what’s shaping up to be a historic season in Winston-Salem.

What else is there to say about the Deacs, man? Wake Forest is 8-0 for the first time in program history and ranked inside the top 10 of the AP Poll, another program first. This team plays with an identity; their tempo is unique. Sam Hartman has been awesome, too: five total touchdowns and 402 passing yards in a blowout win over Duke.

Despite 519 passing yards and three touchdowns via Kenny Pickett, Pitt slipped up vs. Miami — losing at home, 38-34. Yikes.

For whatever it’s worth: ESPN’s FPI still has Pitt as the overwhelming favorite to win the Coastal Division, although the door is still cracked for Virginia and Miami, of all teams.

NC State’s offense looked lost for three quarters; however, the Wolfpack rallied just in time to defeat Louisville in Raleigh, 28-13.

Tim Beck opened things up and let Devin Leary (in the midst of a rather good season) go to work. NC State outscored Louisville 21-3 in the fourth quarter.

Once again, the Tigers struggled on offense. This time, though, freshman running back Will Shipley made the difference. Shipley ran for a career-high 128 yards and two touchdowns, including what would prove to be the game-winning score with under three minutes to play.

Watching Will Shipley’s go ahead TD on repeat all day. What a run. pic.twitter.com/PwZL71mzJA

Clemson has defeated FSU six straight times, although this was the smallest margin of victory since the 2016 season.

It’s not easy to score 49 points and lose by nearly three touchdowns, but that’s exactly what happened to Virginia on Saturday. In a wacky late-hours game out in Provo, UVA fell to No. 25 BYU, 66-49. This has been abundantly clear all season: the offense is great, the defense is less than great.

uva is truly in a league of their own here in regards to 'Good Offense, Bad Defense'; i'm shocked their defense is that close to the median https://t.co/XXPG3FrjKK

Mired in the midst of seemingly another lost season, sans D’Eriq King, Miami has reeled off back-to-back wins over AP Top 20 teams: NC State and Pittsburgh.

Tyler Van Dyke, King’s replacement, has been a revelation, too. The freshman quarterback threw for 426 yards and three touchdowns vs. the Panthers.

The Sagarin rankings slot UNC as the No. 7 team in the ACC, which is exactly where they land here, too. It’s been a disappointing season for the Tar Heels, who lost at Notre Dame on Saturday, 44-34; however, some of the analytics still like this team, a decent amount.

Most power ratings still have UNC a top 25 team while Wake is barely Top 40 https://t.co/Hh5xguoQ4O

North Carolina played well in South Bend. There were certainly a couple of questionable calls from the officials that went against Mack Brown’s crew, too.

NBC knows which calls not to show replays on. They know.

Syracuse has leaned all the way in on being a run-first squad. With only 65 passing yards, Syracuse still defeated a slumping Boston College team with ease, 21-6.

Sean Tucker, who leads the nation in rushing (1,267 yards), was excellent on the ground: 207 rushing yards and a touchdown.

Veteran wideout Tre Turner was a stud for Virginia Tech on Saturday, as the Hokies defeated Georgia Tech, 26-17. Turner caught seven passes, which tied a career high, for a career-best 187 yards. Virginia Tech picked up its lone win the month of October.

While going up against a depleted NC State defense, Louisville’s offense simply couldn’t get it done. Malik Cunningham was held in check and hit constantly from a Drake Thomas-led defense.

Dave Doeren on Vi Jones: "It was a good game for him. Obviously that quarterback is something. I have nothing but respect for Malik [Cunningham]. … Levi being as athletic as he is on the edge, I was happy for him."

Florida State nearly went undefeated in the month of October, but Mike Norvell’s team couldn’t quite hold on at Clemson.

Jahmyr Gibbs had a nice today vs. Virginia Tech — 19 touches, 223 all-purpose yards. However, Georgia Tech’s offense struggled for most of the day, including two turnovers from Jeff Sims.

It’s a bummer to see how Boston College’s season, after a promising start, has unraveled without a healthy Phil Jurkovec at quarterback.

Paolo Banchero was awesome in Duke basketball’s exhibition game on Saturday, though.

– Paolo Banchero looked terrific, moves so well in space. Handle held up in traffic, changing speeds, with creation ops
– Banchero-Mark Williams set to be a strong hi-lo duo, which Duke loves to get to from Horns
– Jaylen Blakes touched the paint a lot