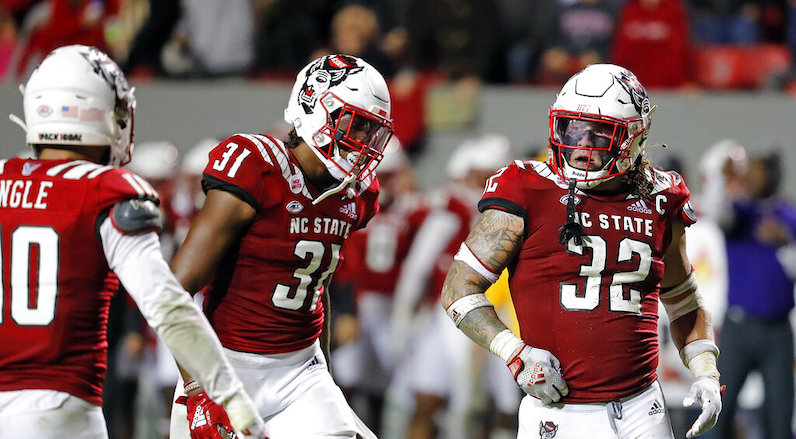 North Carolina State's Drake Thomas (32) celebrates his sack with teammates Vi Jones (31) and Tanner Ingle (10) during the second half of an NCAA college football game against Louisville in Raleigh, N.C., Saturday, Oct. 30, 2021. (AP Photo/Karl B DeBlaker)

Check the calendar: it’s November, somehow. With the days getting shorter, let’s not waste any more time. Here’s what you missed over the weekend in ACC football.

This week’s ACC Football Power Rankings are out. Make sure to check those out here.

On the road Saturday, he completed 76 percent of his 42 attempts for 426 yards — along with three touchdown passes — to hand ranked Pittsburgh its first ACC loss of the season. The Canes needed every bit of those gaudy stats, too, because while Van Dyke couldn’t be stopped through the air, the running game was held to just 64 yards.

Without much of a supporting passing game, Tucker has been incredible this season. The FBS leader in rushing yards (1,267) and carries (201) celebrated a career day in the win over Boston College. Tucker ran for a career-best 207 yards (7.96 yards per carry) and a 51-yard touchdown.

So far, through nine games this season, Tucker has eight 100-yard rushing performances. That ranks No. 1 in the FBS, too. (Duke’s Mateo Durant is tied with the second most at six.)

Thomas finished with a career-best 15 tackles and two sacks as NC State contained Louisville quarterback Malik Cunningham, one of the most explosive offensive talents in the ACC, en route to a big win Saturday night in Raleigh.

The effort from Thomas came at a critical time, too. During last Saturday’s loss at Miami, star and defensive play-caller linebacker Isaiah Moore was lost for the season with an injury. NC State was already down one stud linebacker: Payton Wilson, a 2020 First Team All-ACC performer.

PFF grades aren't finalized, but here are some early notes from Louisville win:

Thomas wasn’t alone, though. This was team effort. Safety Tanner Ingles finished with 10 tackles. Vi Jones picked up seven total tackles, and was a crucial speed element in the run-stop game.

Wake Forest football. These are truly unchartered waters for the Demon Deacons. The first recorded year of Wake Forest football was in 1888. In the ensuing 133 years of football — the first 68 in Wake Forest, N.C. and the last 65 in Winston-Salem — there has never been a team to start a season 8-0 or win eight consecutive games. Until now.

As a result, Wake Forest was ranked 10th in the AP poll this week, which is its highest ranking in school history.

The an interesting dynamic in the ACC this season. Overall, the league is down; Clemson has regressed significantly. However, the quarterback play in the league has been excellent.

These are five quarterbacks in the midst of terrific seasons — and Van Dyke who has been brilliant over the last two weeks. Amazingly enough, all of that quality quarterback action has come from programs not named Clemson and doesn’t include D’Eriq King, who lost most of the season with an injury.

Leary, however, has flown under the radar, some. He’s been quite good in 2021: 66.1 percent completion rate, 21 touchdowns and two interceptions. ESPN’s David Hale gets a little friendly with filters here, but the point remains: Leary has been efficient and opportunistic.