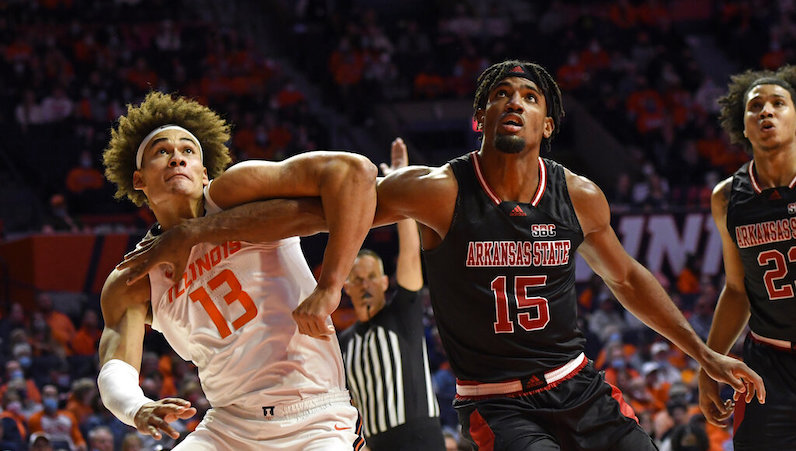 Illinois' Benjamin Bosmans-Verdonk (13) and Arkansas State's Norchad Omier eye a rebound after a free throw during the first half of an NCAA college basketball game Friday, Nov. 12, 2021, in Champaign, Ill. (AP Photo/Michael Allio)

Norchad Omier is the latest addition: Miami basketball has it cooking in the transfer portal.

Mere days after the Hurricanes landed Kansas State transfer Nijel Pack, one of the top shooters in the country, Omier followed suit with another transfer commitment for Miami. Similar to Pack, Omier is a high-level talent, ready to play ACC ball.

Arkansas State transfer Norchad Omier, the Sun Belt Player of the Year and Defensive Player of the Year, has committed to Miami. He's the Hurricanes' second top-10 transfer in the last week, after Nijel Pack picked Miami over the weekend. We had Omier ranked No. 8 overall.

As a hybrid frontcourt player, Omier can do a lot of different things defensively; he finished the 2021-22 campaign with a 6.1 percent block rate and a 3.0 percent steal rate. According to KenPom, Omier ranked No. 4 nationally with a defensive rebound rate of 32.1 percent. (North Carolina’s Armando Bacot finished 10th: 30.0 percent.)

Omier was one of three Division I players this season to finish with 5.0 percent block rate, 3.0 percent steal rate and 30+ dunks, according to Bart Torvik’s database. The other two players: projected 2022 lottery pick Tari Eason of LSU and Kentucky center Oscar Tshiebwe, the National Player of the Year. Tsiebwe led the nation in defensive rebound rate, too: 34.6 percent.

Over the last two seasons, combined, Omier and Bacot are two of only six Division I players to appear in 45+ games, while averaging 10.0 points and 10.0 rebounds per game.

The Fit On Defense

When Omier steps on the floor for Jim Larranaga, he’ll join forces with Jordan Miller; those two will form one of the premier defensive duos in the ACC, if not the country. Miller transferred to the program from George Mason in 2021. During the 2021-22 season, Miller established himself as one of the top defenders in the conference.

He’s superb on the basketball; at 6-foot-7, Miller is capable of matching up with a variety of player types. However, Miller is at his best as an off-ball team defender.

On the sneak, Miller is terrific defending post entry passes, too.

Once you add in Anthony Walker — another hybrid frontcourt player — and the Hurricanes will have three players 6-foot-7 or taller who all posted 2.0 percent block rate and 2.0 percent steal rate this season. Those three could easily play together.

According to KenPom’s adjusted defensive efficiency metrics, Miami hasn’t had a defense rank inside the Top 100 since the 2017-18 season, a team that featured Bruce Brown and Lonnie Walker. It feels like a safe bet for that to change next season.