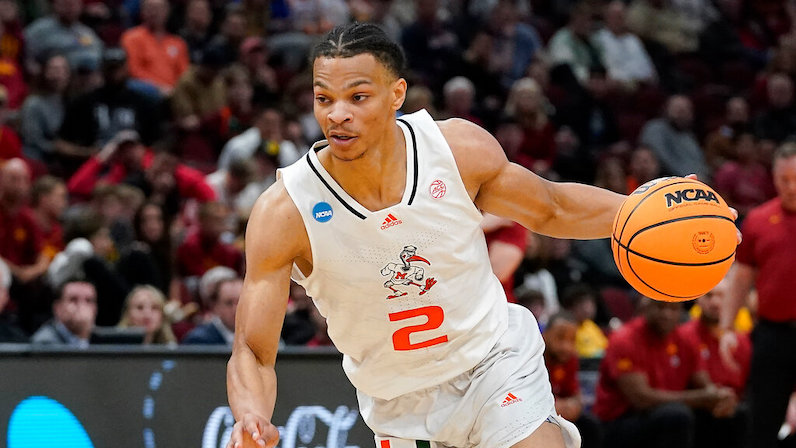 Miami’s Isaiah Wong during the second half of a college basketball game in the Sweet 16 round of the NCAA tournament Friday, March 25, 2022, in Chicago. (AP Photo/Nam Y. Huh)

Isaiah Wong, one of the best pure scorers in college basketball, declared for the 2022 NBA Draft. This has been the expectation for several weeks now; however, Wong made the decision official on social media. For the time, Wong will maintain his college eligibility.

A 4-star prospect out of New Jersey in the 2019 recruiting class, Wong committed to Miami back in Sept. 2018. Halfway through his freshman season, Wong gained more playing time and added control of Miami’s half-court offense. He never looked back.

No one should’ve been surprised when Wong made another big leap as a sophomore. He averaged 17.1 points per game, while shooting 34.7 percent from beyond the arc (5.3 3PA per game) and 80.3 percent at the line (4.7 FTA per game). As a gifted on-ball creator, Wong was an easy fit in Miami’s methodic spread pick-and-roll offense.

Following his sophomore year, Wong tested the NBA Draft waters in 2021. He decided to return to Coral Gables for at least one more season, though.

Figured this was coming, but Isaiah Wong will return to Miami as arguably the top 1-on-1 shot creator in the ACC (will also cut down on Charlie Moore usage)

When Miami flipped to a 5-out offense for the 2021-22 season, Wong continued to flourish. Early on, it was obvious: Jim Larranaga had something with Wong, Kam McGusty, Charlie Moore, Jordan Miller and Sam Waardenburg. This was the group that pushed Miami out of an extended dark period and back into the NCAA Tournament, which culminated in an Elite Eight appearance.

With improved spacing, more movement and a few new sets, Wong took his artistic interior finishing to another level. He’s an elite on-ball shot-creator, who scores from all levels of the floor a rarely turns it over: 1.7 turnovers per 40 minutes this season.

Wong shot 62.7 percent at the rim this season, including 11 dunks. That’s an increase from his sophomore year: 58.7 percent around the basket.

Here’s Wong attacking downhill from Miami’s Iverson pick-and-roll action. With Jabari Smith playing high to Ice this screen, Wong snakes back and gets north-south for a monster finish over the projected Top 3 pick.

He has the ability to make tough shots look stupidly easy, at times. Once again, over 75 percent of Wong’s 2-point field goals were unassisted (78.6 percent).

Wong could produce 1-on-1 against some of the toughest covers in the ACC, like Virginia’s Reece Beekman, a defender that frequently gave the Miami guard his fair share of troubles.

In terms of prospect evaluation, Wong will need to show improvement with his 3-point jumper. He’s never shot a great percentage from deep. This is due in part to the amount of off-dribble 3-point volume he attempts. However, Wong shot just 30.2 percent from beyond the arc (159 3PA) this season.

Ultimately, I don’t worry too much about the shot. He’s an excellent free throw shooter (78.7 FT% career), an indicator of skill and touch. Mix in his shot versatility — the pull-ups, fade-aways and step-backs — and Wong projects as someone that should be able to shoot it.

The next concern for Wong centers on his ability to create for others. Wong is wired to scorer, which is great. He’s a legit bucket-getter. That said, Wong isn’t overly manipulative; he can make some reads and the station-to-station passing is fine. Given his scoring gravity, it feels like he should better leverage that for passing creation.

There are some encouraging flashes, though. On this possession, Wong flows from Miami’s Chop action into spread pick-and-roll; when Dallas Walton shows at the level of the screen, Wong sees Wake Forest’s back-line defense in rotation and skips it to Miller for a corner 3.

Finally, there are the concerns with defense. Wong can be a disruptive team defense. In Miami’s pressure-packed defense this season, he worked his way into steals by jumping passing lanes or making back-line rotations. However, is physical enough at the point of attack to guard ball screens in a more traditional approach?

Of course, if Wong elects to return to Miami for his senior year, he’d have a cushy landing spot. The Hurricanes just landed Kansas State sniper Nijel Pack, one of the best shooters in the country. Plus, Miami flipped the switch with its NIL efforts. Wong would command a steep signing bonus if he returned to Coral Gables, once more.