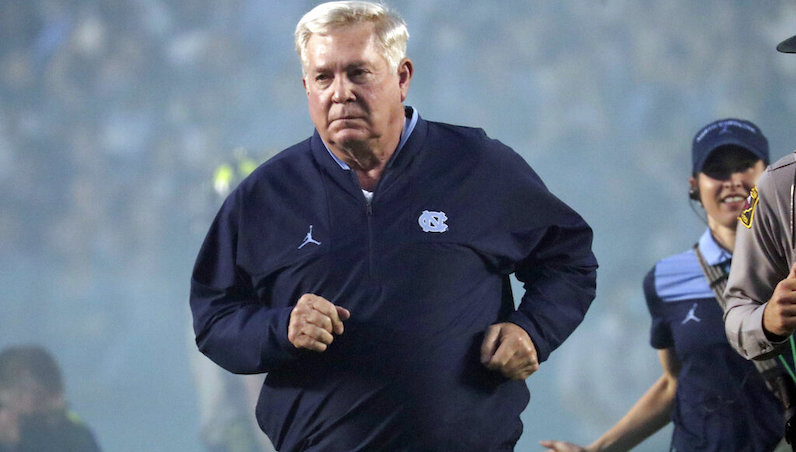 The second stint of the Mack Brown era at North Carolina will last for a little bit longer. Brown, 70, and the University of North Carolina have agreed to a one-year contract extension. Brown will sign with the school through 2026.

#UNC and Mack Brown have agreed to a one-year contract extension keeping the length of his contract at five years.

Since Brown’s return to UNC ahead of the 2019 season, the Tar Heels have gone 21-17 and appeared in three straight bowl games. So far, the signature player of Brown’s time in Chapel Hill is quarterback Sam Howell, who will head to the NFL for the 2022 season.

North Carolina finished the 2021 season with a 6-7 record and a loss in the Duke’s Mayo Bowl to South Carolina. Overall, the year was a bit of a disappointment. However, with the help of ace recruiter Dre Bly, Brown has completely revitalized North Carolina’s recruiting efforts.

North Carolina’s 2020 class finished top 15 nationally and ranked No. 2 among ACC programs. That group was headlined by 5-star cornerback Tony Grimes, who reclassified to 2020.

The following year, UNC posted another top-15 class; this group was centered around a historically-dominant in-state recruiting effort. That class included another 5-star defender — defensive end Keeshawn Silver — and quarterback Drake Maye, a top-50 prospect and one of the players that will look to replace Howell under center.

For 2022, North Carolina and Mack Brown signed the ACC’s No. 1 recruiting class — ahead of Clemson. This group is led by two 5-star prospects: Zach Rice, the No. 1 offensive tackle, and Travis Shaw, an in-state defensive tackle from Greensboro.

Brown received another extension less than a year ago — back in March 2021. That deal signed him through 2025.

Of course, athletic director Bubba Cunningham would be motivated to extend Brown due to ramifications on the recruiting trail. Brown will turn 71 the day UNC opens the 2022 football season vs. Florida A&M. If prospects are worried that Brown is close to retiring, well, that can have a big sway in the decision-making process. Obviously, this is something that ACC rivals — with younger head coaches, like Dabo Swinney and Dave Doeren — could use against North Carolina, too.

This extension is all about perception. In terms of recruiting, perception is reality.

Who, When and Where: A look at the 2022 ACC Football Schedule