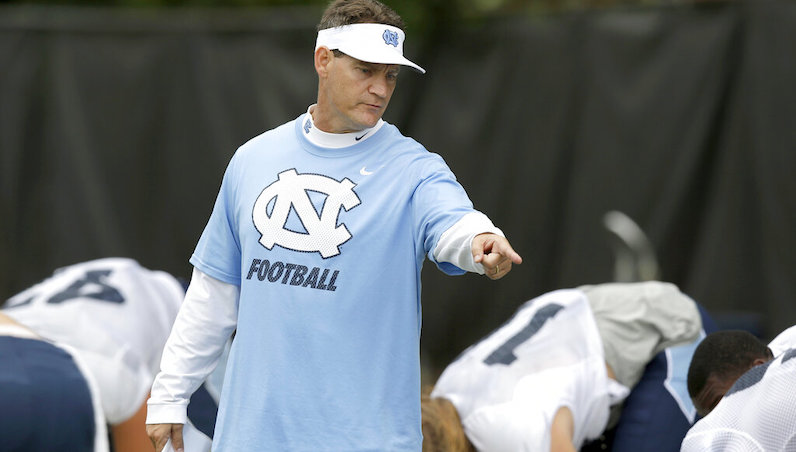 FILE - In this Aug. 10, 2015, file photo, North Carolina defensive coordinator Gene Chizik works with players during an NCAA college football practice in Chapel Hill, N.C. Chizik said it's difficult for defenses to prepare when they face so many new offensive coordinators and schemes in a season. (AP Photo/Gerry Broome, File)

According to multiple media reports, former Auburn coach Gene Chizik will return to North Carolina and become the new defensive coordinator, under Mack Brown. Zach Barnett of Football Scoop was the first to report the news.

Of course, this will also be Chizik’s second stint as the defensive coordinator for UNC. During the 2015 and 2016 seasons, Chizik held that post — two of the best defensive years of the Larry Fedora era. Chizik resigned from North Carolina in Feb. 2017. However, he’s back, now.

SOURCE: Former Auburn head coach Gene Chizik has accepted an offer to become the new defensive coordinator at North Carolina. As a Co-DC at Texas under Mack Brown, he helped the Longhorns win the 2005 national title. @zach_barnett first reported the move.

Brown and Chizik have history together, too. Chizik was the co-defensive coordinator at Texas for two seasons (2005-06) with Brown. During the 2005 season, Texas won the national title.

When Chizik was the head coach at Auburn (2009-12), the Tigers won the 2010 national title, too, thanks to one of the greatest individual seasons in college football history from Cam Newton.

Earlier this week — on Friday — UNC let go defensive coordinator Jay Bateman, who’d been with Brown in Chapel Hill since Dec. 2018. The defense, however, never got going under Bateman. The 2021 season marked the nadir for defense under Brown/Bateman.

A few days ago, it seemed as though Chizik was set to get back into coaching — with a head coaching opportunity in the USFL. That, however, is no longer the case. Once again, Chizik is headed to Chapel Hill.