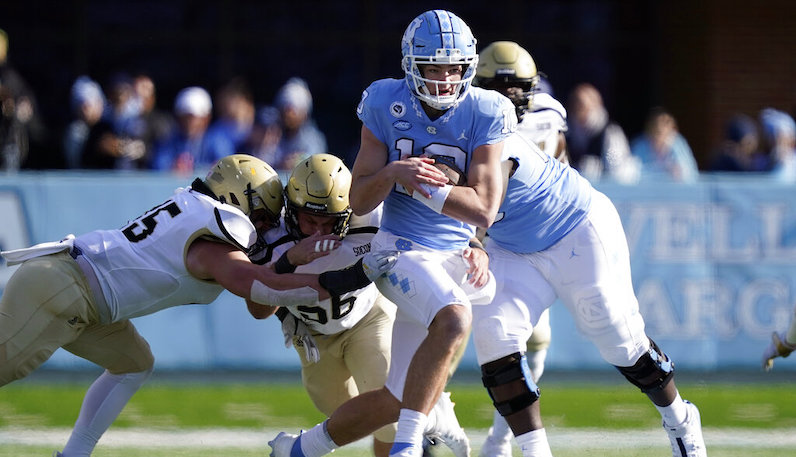 In what may have been his final home game as a member of North Carolina’s football program, Sam Howell didn’t play. The junior quarterback sat out the 34-14 win over Wofford due to an upper-body injury. Howell sustained the injury during UNC’s overtime loss at Pittsburgh.

Criswell completed 11-of-19 pass attempts for 125 yards. He also ran for 66 yards and a touchdown — a one-yard plunge to open the game’s scoring. Criswell was a 4-star prospect in the 2020 recruiting class.

Maye attempted his first pass as a collegian. Overall, he went 7-of-9 on pass attempts: 89 yards and a four-yard touchdown toss to Kamari Morales.

With eight more receptions for 89 yards in this game, Josh Downs now ranks second on North Carolina’s single-season reception list with 90. Ryan Switzer set the record in 2016 with 96. The 89 yards receiving bring Downs up to 1,198 receiving yards in 2021, also good for No. 2 in the program’s record book. Hakeem Nicks has the single-season yards record: 1,222, set back in 2008.

Howell isn’t done yet, though. He’s expected to return to the field next week when UNC plays NC State.

Poll: What should Howell do following the 2021 season?