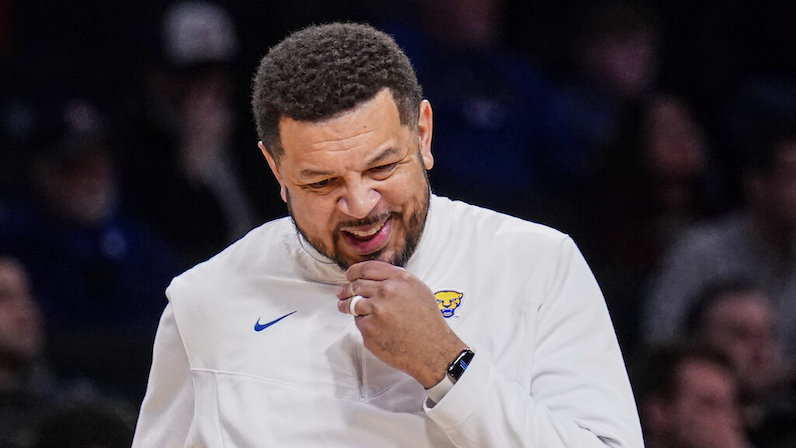 Dior Johnson is headed to the ACC for the 2022-23 season. On Monday (June 13), Pitt basketball and head coach Jeff Capel landed a commitment from Johnson, a 4-star point guard and a Top 35 prospect in the 2022 class.

Dior Johnson, the top available high school recruit, has committed to Pitt, he told ESPN. "I was looking for a coach to challenge me and hold me in high account." https://t.co/InDWlZPLqh

A native of Saugerties, New York, Johnson initially commit to Syracuse back in Feb. 2020. Later that year, though, Johnson de-commit from Syracuse and re-opened his recruitment. Eventually, Johnson committed to Oregon in the Summer of 2021.

However, one year later, Johnson made his second de-commitment, backing away from the Ducks after the additions of Colorado transfer Keeshawn Barthelemy and South Carolina transfer Jermaine Couisnard. After testing the 2022 NBA Draft waters, veteran guard Will Richardson also withdraw from the draft and will return to Eugene for another season.

This opened the door for several program. Ultimately, Pitt won out over Washington State and Mississippi State.

Ironically, Syracuse went on to land 2022 4-star combo guard Judah Mintz, a dynamic talent and another Top 50 prospect in the class. Previously, Mintz committed to Pitt, before backing out of that decision last November.

As Johnson described to ESPN’s Jonathan Givony, his relationship with Capel was key for his decision-making process: “I was looking for a coach to challenge me and hold me in high account.”

For decades now, Capel has been one of the better recruiters in college basketball; he helped mold Duke into a one-and-done machine alongside his mentor, Mike Krzyzewski. Capel has brought talent to Pitt, too. Justin Champagnie was an All-ACC talent and a second round draft pick of the Toronto Raptors in 2021. Current power forward/center John Hugley has evolved into one of the better frontcourt scorers in the country as well.

This, however, is a major recruiting win for Capel. During his tenure (starting in the 2018-19 season), the Panthers have yet to play in the NCAA Tournament or even the NIT. The 2020-21 season looked like a breakthrough moment for Capel; however, that team melted down the stretch, losing 10 of its final 12 games.

Now, Capel adds a dynamic primary ball handler to his offense with Dior Johnson; he’ll pair nicely with Hugley, an All-ACC-caliber starting center. Jamarius Burton, a solid secondary creator, will team up with Johnson in the backcourt, providing a veteran, defensive presence. So, too, will Nelly Cummings, a 6-foot transfer from Colgate who averaged 14.7 points per game this past season. Pitt also added Marquette transfer Greg Elliott, who can help as an off-ball movement shooter.

Finally, there’s junior wing William Jeffress, who has struggled at times, but has an excellent basketball frame and has shown flashes.

All in all, there’s an interesting mix here for Capel to work with: the Panthers have multiple go-to scorers with Johnson and Hugley.