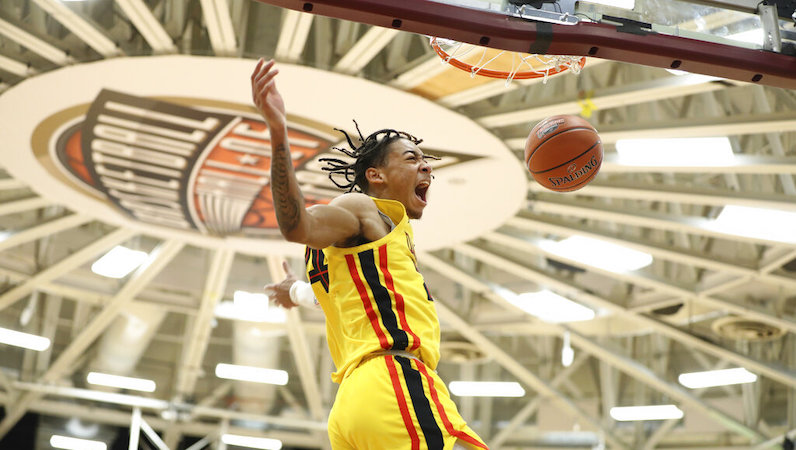 Judah Mintz is in fact ACC-bound and Syracuse is the destination.

One of the most explosive scorers in the 2022 recruiting class, Mintz announced his decision to play for Jim Boeheim and Syracuse. Mintz is a 4-star prospect. 247 Sports ranks the 6-foot-3, 165-pound Mintz as the No. 53 play in the class.

Mintz, who initially committed to play at Pittsburgh, re-opened his recruitment in November. Quickly, several other ACC programs entered the mix: NC State, Wake Forest and Syracuse. DePaul and Georgetown were also in on Mintz.

In early February, Mintz scheduled an official visit to Syracuse — the weekend of the Duke game.

Mintz initially committed to Pittsburgh last June. At this point of the recruiting cycle, he was a slightly unheralded prospect. That changed, quickly: Mintz erupted during the July evaluation period. As his stock climbed, Pitt’s 2021-22 season got off to a bumpy start.

The day after a season-opening loss to The Citadel, Mintz de-committed from Pitt, which was a serious blow to Jeff Capel and the program.

This is another missed opportunity for Kevin Keatts, too. As things continue to unravel in Raleigh, Mintz would’ve served as a (necessary) source of hope. It’s rather obvious: Keatts will have to hit a home run or two in the transfer portal.

Given the potential roster turnover set to hit Winston-Salem, too, albeit under more pleasant circumstances, Steve Forbes must be ready to again work the transfer portal.