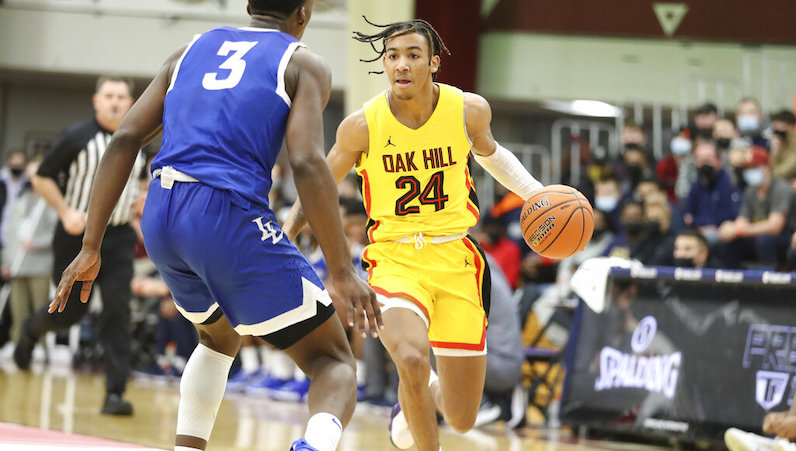 Judah Mintz, one of the most explosive scoring guards in the 2022 recruiting class, has an official visit set for Syracuse. The 4-star combo guard will visit Syracuse during the final weekend of February. This will overlap with when Duke’s in town to play the Orange.

Mintz, who initially committed to play for Jeff Capel and Pittsburgh, is considering two other ACC programs, along with Syracuse. NC State and Wake Forest are also in the mix. The 6-foot-3, 165-pound guard will visit NC State in two weeks, too.

NEWS: Elite 2022 CG Judah Mintz (@Jmintz10) has scheduled an official visit to Syracuse for the weekend of February 25th. That means he will be in attendance when the Orange hosts Duke on the 26th. https://t.co/4yP0vw31E6 pic.twitter.com/fOSUL7JaSi

Last June, Mintz picked Pittsburgh; at the time, he was a mostly unheralded recruit. However, Mintz erupted during the July evaluation period. As his stock rose, Pitt’s 2021-22 season got off to a bumpy start.

In fact, Mintz de-committed from Pitt the day after a season-opening loss to The Citadel. It’s been a tough go of things for Capel; the loss of Mintz is a serious blow for his long-term prospects with the program.

As Kevin Keatts continues to take on water at NC State, the addition of Mintz to his 2022 class would mean a lot, potentially. The Wolfpack currently have two 3-star signees for 2022: Shawn Phillips and in-state point guard LJ Thomas.

For Steve Forbes and Wake Forest, though, Mintz signifies an opportunity. With the success of transfers Alondes Williams and Jake LaRavia, Forbes has quickly turned things around in Winston-Salem. However, the next step would be for Forbes to land another notable prep commitment.

Freshman point guard Carter Whitt, now in his second season with the program, was a big addition to the program. Whitt reclassified and entered Wake Forest with the 2020 class. Forbes microwaved success this season, but for things to keep moving forward, he’ll need more impact transfers and wins along the recruiting trail.

There’s a very good chance Williams could dart for the NBA Draft — with his stock soaring. LaRavia could follow suit, too, although he’s not the same caliber of draft prospect.

ACC Power Rankings: Demon Deacons land at No. 2 this week