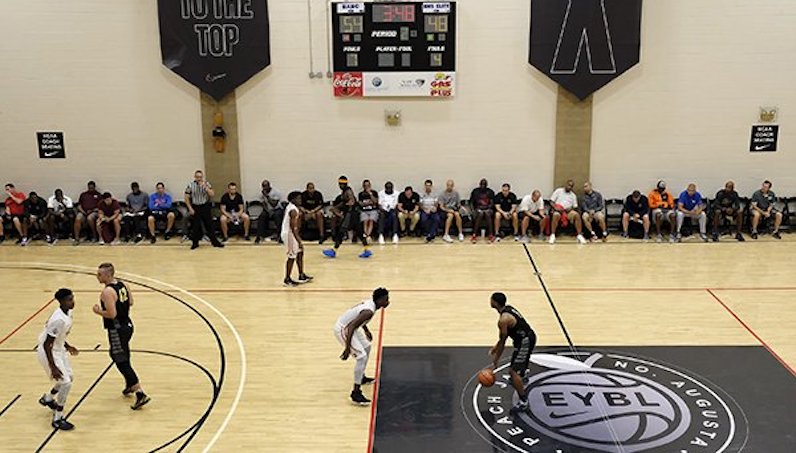 With the Nike Peach Jam finishing up last week, there are a lot of thought experiments necessary for where the 2022 and 2023 recruiting classes stand.

It’s only been two months since prospects could take official on-campus visits; the July evaluation period just flew by, too.

Given the profile of the Peach Jam, it was a good chance for college coaches, recruiters and NBA scouts to see some of the game’s elite prep players in North Augusta. Of course, in that group of player, there were plenty high-profile ACC targets. Let’s see who stood out.

It remains unclear what Duren plans to do from a reclassification standpoint; the No. 1 overall prospect in the 2022 class could move up to 2021 and play college basketball next season. These rumors and reports have been in the air for months now.

When the decision to leave the prep ranks comes, the 6-foot-10, 230-pound Duren could jump start to the G League Ignite program, which would welcome him with open arms and a bunch of money.

However, if Duren elects to play college ball — in either 2021 or 2022 — he’ll likely pick between Kentucky, Memphis and Miami.

Dillingham is a 5-star point guard in the 2023 class and a top-10 prospect overall, according to 247 Sports. A strong UNC-lean at the moment (Steve Robinson is the lead recruiter), Dillingham averaged 18.7 points per game, a top-5 number in the 16U division.

That included a 23-point, four-assist performance against Kylan Boswell — one of the top 2023 point guards from the West Coast.

Jared McCain and Kylan Boswell have outplayed Robert Dillingham and Aden Holloway in the first half. Dillingham has def grown on me since first watching him but I think McCain is a top 10-15 player in 2023 class

NC State also offered Dillingham a scholarship back in June.

It’s quite possible that two future UNC point guards put on filthy displays of skills at the 2021 Peach Jam. While Dillingham led the 16U CP3 squad, Bradley carried the 17U CP3 team. Bradley averaged 20.3 points and 6.5 assists per game, which led the event.

Bradley is one of the five best point guard prospects in the 2022 class; he’s long been a priority target for North Carolina. Bradley took an official visit to UNC in June, too. However, he’s recruitment has heated up — with more national flavor.

Alabama, Arizona, Florida State and Michigan are all in the mix as well. Nate Oats is turning Alabama into one of the premier offensive programs in the country; young point guard prospects should want to play in his system. Juwan Howard has it rolling at Michigan. These are two of the current “It Programs” in college hoops, both of which are running systems that approach what an NBA offense looks and feels like.

Bradley has taken official visits to Bama, Arizona and Michigan.

While averaging averaging 16.5 points, six rebounds and three assists a game, the 6-foot-6 Whitehead flashed incredible two-way versatility. Whitehead is a gifted athlete, with promising scoring and shot versatility; he also plays with a phenomenal motor.

During the Peach Jam, Whitehead defended all five positions for Team Durant, a type of defensive versatility that would feature well at Florida State and Duke, two switch-heavy defensive programs.

Whitehead took an official visit to Duke back in the middle of June. He could potentially be the second major get of coach-in-waiting Jon Scheyer. Whitehead also took visits to FSU and Kansas.

A decision from Whitehead will comes soon, too. The 5-star forward will announce his plans on Aug. 1. Duke is considered the favorite for Whitehead.

Lively continued to show out while in North August. With a confident shooting stroke, Lively flashed his two-way prowess inside the paint, too. Lively is an incredibly active defender, which speaks highly of where he can go as a prospect — college and to the NBA.

Ground coverage is the name of the game for centers now, and Lively brings that to the defensive side of the floor.

Nike EYBL Session I: Defensive Player of the Session 🚫

The 5-star big man racked up 35 blocks over 7 games (5.0 BPG) while pillaring one of the country's top defensive squads 💯

During the month of June, Lively took official visits to both Duke (June 29) and North Carolina (June 8). In between those two stops, Lively also visited Kentucky. Duke and Kentucky look like the top two destinations for Lively, but UNC, Florida State and Michigan are in the mix.

One month after his commitment to Jeff Capel and Pitt basketball, Mintz went bonkers at the Peach Jam. The 6-foot-3 combo guard finished second in the event with a 22.4 points per game scoring average, just behind Keyon Menifield.

Judah Mintz incredibly efficient creation .. He was the only player with 20 pts and 3 ast per 70 poss and 60%+ eFG https://t.co/ssW8e9buTR

The Peach Jam was a bit of an announcement for Trimble — who performed well at the event and posted one of the EYBL’s signature plays.

2022 UNC commit, Seth Trimble, with the big follow-up dunk in the early game this morning pic.twitter.com/a4wVxNQlnk

Trimble is wired to score, but he isn’t just a high-volume, high-usage talent. There’s an efficiency to his game as well, which was on display this July.

Beyond the scoring mix, Trimble shifted his output around in different ways — leading his team to a strong run in the event. As of now, Trimble is pegged to be the incoming lead ball-handler type in North Carolina’s 2022 class. Of course, that could change slightly if Bradley picks UNC.

More of an unheralded prospect, Menifield went bonkers scoring the ball at the Peach Jam, including multiple 20+ point performances.

The Family (@TheFamily_bball) G Keyon Menifield Jr. (@TheCh0sen0ne_) had a monster week at the Peach Jam

Menifield finished with a 22.6 points per game average, which led the 17U division. This could be a really nice under-the-radar addition for Earl Grant at BC.

Duke’s Scheyer: Paolo Banchero will be central to everything we do this season