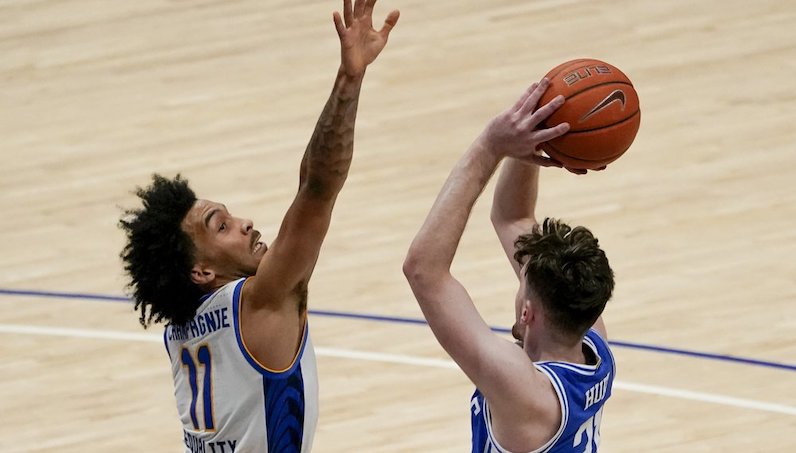 This will come as little surprise, but Justin Champagnie is done with college hoops. Champagnie and his camp have announced that he has signed with Life Sports Agency; he plans to remain in the 2021 NBA Draft pool.

Champagnie initially declared for the draft back in late March. After going through the early pre-draft process, Champagnie confirmed that decision.

Pitt sophomore Justin Champagnie's college career is over, his agent Todd Ramasar confirms to ESPN. He'll be keeping his name in the 2021 NBA Draft. First-team All-ACC after averaging 18 points, 11 rebounds per game as a 19-year old, one of the youngest sophomores in the class. https://t.co/HnBHRwj8nu

After a strong freshman season, it was clear early on in the season that Champagnie made another jump as a player. During his sophomore run, the 6-foot-6 Champagnie averaged 18.0 points, 11.1 rebounds, 1.2 steals and 1.3 blocks per game.

Those numbers, however, only tell part of the story for Champagnie — a dominant two-way force and rebounding machine. Champagnie finished inside the top 50 nationally with a defensive rebound rate of 25.6 percent.

At one point this season, Champagnie loomed as the favorite to win ACC Player of the Year; however, as Pitt’s season unraveled, so, too, did Chamapagnie’s best shot at the award. For his efforts, though, he was still named first team All-ACC.

While there isn’t much buzz for Champagnie as a first round pick, he’s a solid second round prospect. Given his age — he’s only 19, young for a player two years out of prep ball — and skill set, Champagnie is a prospect that all NBA franchises should take note of. He’s already quite good, and he’s still still better.

Champagnie has a great deal of skill — as evidenced by his defensive event-creation numbers (blocks and steals) and free throw percentage (74.5 FT% career). A team that gets Champagnie on its roster has a very intriguing developmental piece. With his versatility — scale up or down — it’s easy to see a variety of ways teams could utilize Champagnie, especially as a small-ball weapon.

Even before the end to the 2020-21 season, things were already shaping up poorly for Pitt. By the start of march, former stalwarts Xavier Johnson and Au’Diese Toney left the program. Those two have since committed to Indiana and Arkansas, respectively.

Pitt missed out on some high profile transfers, too, including Jayden Gardner (ECU to Virginia).

Over the weekend, 5-star 2021 center Efton Reid committed to LSU over a host of ACC programs: Pitt, Virginia and Louisville.

As Jeff Capel gets ready for his fourth season with the Panthers, Pitt is in a tough place. The team will need to over-perform its offseason expectations if its to make the NCAA Tournament for the first time since 2016.

Pitt misses on 4-star 2021 PG Jaylen Blakes, who will head to Duke