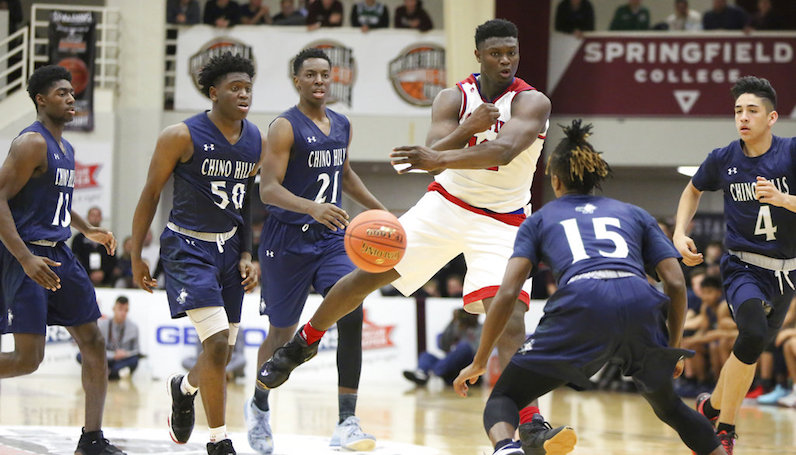 Back in June, six ACC players went in the first round of the 2018 NBA Draft, including lottery picks Marvin Bagley, Wendell Carter and Jerome Robinson. Sacramento’s selection of Bagley with the No. 2 pick gave the Duke Blue Devils a top-3 pick in five straight drafts.

This came a year after a record 10 ACC players went in the first round of the 2017 NBA Draft — led by Celtics wunderkind Jayson Tatum.

It’s 11 months into the future, but looking ahead: the ACC could be in line to do something special in 2019, too. The first four picks in the 2019 draft — or perhaps four of the first five picks — could absolutely hail from the league.

The top two players in the 2018 class, according to 247Sports, and the top two wings are both Durham denizens — for the next nine months, at least: RJ Barrett and Cameron Reddish.

Last month, I went into detail on why Barrett projects as an incredibly productive offensive and transition player. Barrett will want to flash the ability to be a primary ball handler, which could be tricky next to Reddish and Tre Jones, the No. 1 point guard in the 2018 class.

In his brief stint with the Canadian national team this summer, Barrett struggled shooting from distance, which will be another point of emphasis. If Barrett projects into a high-usage pick-and-roll machine in the NBA, a jumper and handles will be critical.

(Word out of Durham this summer: Barrett has been excellent, and this comes after he spent time in California with super trainer Drew Hanlen.)

Reddish looks the part of a modern NBA wing: an effortless scorer, with an endless wingspan (7-foot-1). Like Barrett, Reddish can play-make off the dribble — into jumpers — or look to create.

Little, who was named the MVP of both the McDonald’s All-American Game and Jordan Brand Classic, is another prospect that looks like the future of basketball. With a 7-foot-1 wingspan and a nose for the rim, Little could be a face-up demon; if he adds a jumper, and can stretch it to the three-point line, then he has the ability and frame to be a monster closeout-beater.

Add in his defensive capabilities, and this is the makings of a high-level prospect — built for the positionless, switchy future of the NBA.

It’s pretty amazing that the consensus top-three picks, right now, will all play basketball within mere minutes of one another next season.

However, there may not be a more hyped prospect in the 2018 class than 6-foot-7 dunk-machine Zion Williamson. That’s not even a bold take; we’ve been watching videos on our phones and computers for years of Williamson trying to break rims in South Carolina.

This season will be critical for Williamson, who Dukes list at 285 pounds on its website. At that size, it seems impossible for Williamson to possess a 40-inch vertical, too.

There’s plenty for Williamson to prove on the offensive end. Can he shoot? How much stretch does he add to the frontcourt? Williamson has power, but his he a timely cutter? How mobile is he away from the ball? What’s his vision like — can he pass?

I’d argue, though: it’s what Williamson showcases on the defensive end that will be more valuable for his draft stock and future forecast. If Duke moves away from the zone with its wing-heavy roster, how many positions can Williamson hang with? It’s critical that he demonstrate the ability to switch, and hang with multiple positions.

Right now, there’s plenty of variance with Williamson’s draft projection. Some mock drafts feature him as a top-five selection; other project the forward as a later-lottery selection. Regardless, he’s inside the lottery for basically any mock you can cue up.

Best of the rest