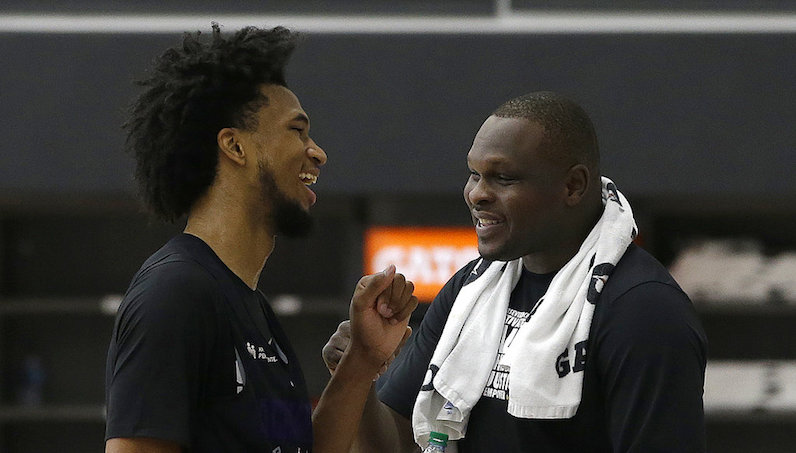 Marvin Bagley, left, talks with Sacramento Kings forward Zach Randolph, left, after working out for the team, Monday, June 11, 2018. The Kings have the second pick in the upcoming NBA draft and Begley III, the former Duke star, is considered one of the top choices in the draft. (AP Photo/Rich Pedroncelli)

After working out with the Sacramento Kings last week, rumors a swirling that the Kings will target Duke’s Marvin Bagley with the No. 2 pick. The 2018 NBA Draft takes place this Thursday; Phoenix owns the No. 1 pick.

Am hearing that after Ayton at 1, Bagley is a near-lock at 2. After that, good luck with your guesses.

If the Suns go with Arizona’s Deandre Ayton with the top selection, and Sac Town follows up with Bagley at two, then that means that European wunderkind Luka Doncic falls. (The Atlanta Hawks, who control the No. 3 pick, would likely approve of this outcome.)

This could be a smokescreen; it’s tough to tell what’s real during the week of the draft. However, if the Kings pass on Bagley, then the lefty could still land in the top three. Bagley worked out with Atlanta, too.

Marvin Bagley was the 2018 ACC Player of the Year, and a dominate force in the paint this year for Duke — where he teamed up with Wendell Carter, another likely top 10 pick.

Going back to Jabari Parker — who hits restricted free agency this summer — in the 2014 NBA Draft, Duke basketball has an ongoing run of having one player selected in the first three picks:

For that streak to be extended to five straight in 2018, Bagley has to be the guy. It should also be noted: if the 2017 draft could be re-picked, there’s a near-100 percent chance Tatum goes No. 1.

If Marvin Bagley goes to Sacramento, he will team up with another former top recruit and Duke Blue Devil: Harry Giles, who will look to get on the floor in 2018-19.

Duke, of course, will add the nation’s No. 1 recruiting class to the program this summer; that five-man group is headlined by 5-stars R.J. Barrett, Cameron Reddish and Zion Williamson.

It’s super early, but Barrett, Reddish and Williamson are already projected as top-five picks for the 2019 NBA Draft. Currently, Barrett is viewed as the consensus No. 1 overall pick; it would be fairly unlikely to see him slip far from that ledge.

So, if Bagley can keep this top three streak alive in 2018, there’s a very good chance it continues for a sixth straight year in 2019.

Now an upperclassman, Duke’s Marques Bolden is one of the ACC’s most intriguing players