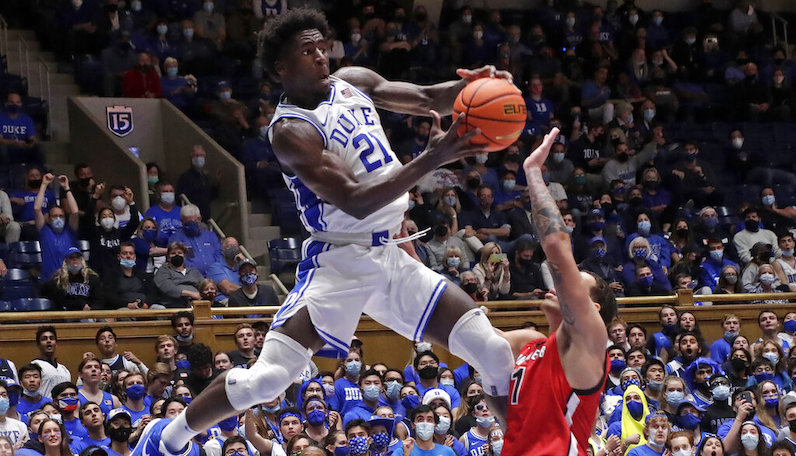 AJ Griffin is one of the most talented draft prospects in the world, but it’s been tough for the freshman forward to showcase his tremendous gifts over the last two years. A knee injury back in Jan. 2020 greatly disrupted his prep career. Then, as Duke was getting set to start the 2021-22 season, Griffin suffered another knee injury during an October practice.

Griffin recovered ahead of schedule; he was in the lineup when the Blue Devils took on Winston-Salem State in an exhibition game later that month. However, Duke’s coaching staff has been cautious with his minutes. Griffin has appeared in all four games, so far, but he’s averaging only 10.9 minutes per contest — mostly as a backup power forward.

During the season opener vs. Kentucky, Griffin stepped up and played 11 solid minutes while Paolo Banchero dealt with cramps. However, Duke’s win over Gardner-Webb marked a really encouraging performance from Griffin.

Griffin, who is built like a defensive end, moved well and looked downright dynamic in a couple of different instances. He may not be officially back to his full athletic peak, but these are positive indicators.

(I was at this game, sitting on press row. After a couple of these Griffin highlights, I glanced over at Duke’s bench. Not only were Griffin’s teammates going crazy, but Duke’s staff looked giddy as they tried to contain their excitement. It’s obvious: this program is pulling for AJ, knowing fully well what he’s capable of doing.)

More than anything: it’s great to see Griffin planting and changing directions while on the break, moving at high speeds and finishing in traffic.

Griffin has the ability, when healthy, to be a monster defender — both on and off the ball. During the second half vs. Gardner-Webb, Griffin ripped the ball out of the hands of an opponent — with a two-handed dig — and pushed it the other way.

Griffin didn’t quite have the vertical pop to spike this grab-and-go finish, but the idea and template are there.

Towards the end of the contest, Griffin may have had the play of the game — on something that won’t register in the box score. After a missed shot, the Blue Devils looked to run in transition; Jaylen Blakes saw Griffin flying down the floor and tried to hit a home run, lofting a hit-ahead lob pass, which was a little off the mark. Griffin, however, was able to vertically climb the latter, control the ball with his off hand and kick a pass out to Joey Baker before he hit the floor.

As Duke’s season progresses, the health and explosiveness of AJ Griffin must be monitored. Ultimately, Griffin has the ability to become a top 3-5 pick in the 2022 NBA Draft — if healthy. That’s what matters most, too: making sure this guy has the opportunity to chase basketball dreams without the worry of injuries. No one wants that.

For Duke, though, a healthy AJ Griffin ensures that this team has the best personnel of any program in the country. The small-ball lineup of Wendell Moore Jr., Trevor Keels, Jeremy Roach, AJ Griffin and Paolo Banchero is absolutely lethal, on paper. Let’s hope we actually get to see it.

Caleb Love off to a fast start for North Carolina