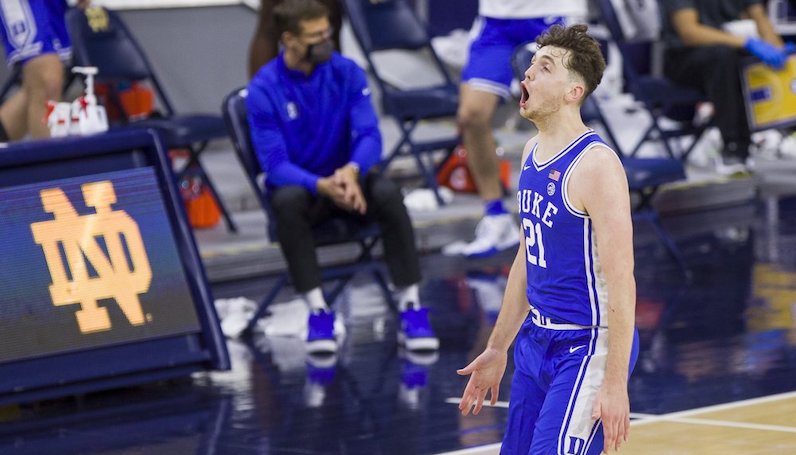 After returning for his sophomore season, Hurt stepped up in a big way for the Blue Devils. Hurt quickly emerged as one of the top offensive talents in the ACC and one of the country’s elite 3-level shooters.

Best wishes to our guy @HurtMatthew! A walking bucket headed to the league. pic.twitter.com/bk6qmiAWfM

Hurt was named the conference’s Most Improved Player and first team All-ACC. Throughout the season, Hurt was a constant force on offense.

In an ode to Dirk Nowitzki this season, Hurt perfected a new signature move: an unblockable one-legged fadeaway jumper.

Hurt is the third Duke player to declare early for the draft; he joins Jalen Johnson and DJ Steward. Several players have left the program via the transfer window, too: Jordan Goldwire, Jaemyn Brakefield and Patrick Tape.

Duke’s frontcourt is set for next season, though. As of right now, the Blue Devils should be ready to roll with Mark Williams at center and 5-star incoming freshman Paolo Banchero at power forward. AJ Griffin, another 5-star prospect, should handle the 3, while Wendell Moore Jr. (if he returns) can provide depth along the frontline.

The same can be said for Henry Coleman, a strong team defender who should be ready for a larger role next season. Coleman can give Duke minutes at the 4 and 5.

Duke may need to add more depth in the backcourt, but on paper sophomore Jeremy Roach, incoming 5-star freshman Trevor Keels and veteran shooter Joey Baker are a nice start.