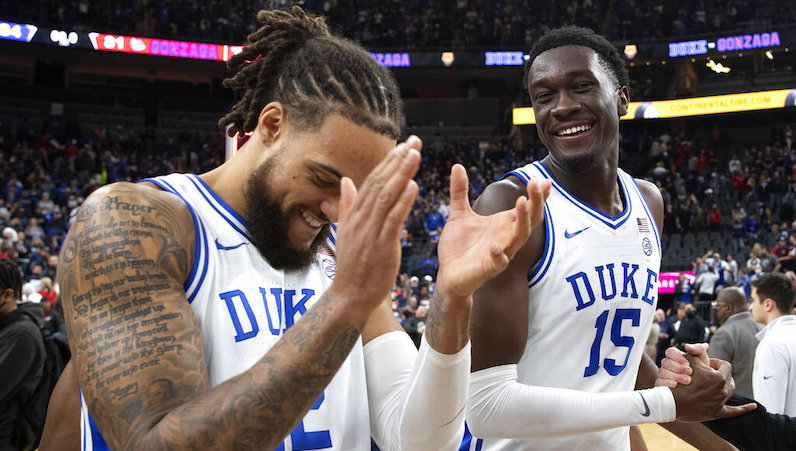 The No. 1 recruiting class in the country grew by one this week: Christian Reeves commits to Duke.

Less than a week after Duke landed 5-star forward Mark Mitchell, Reeves picked Duke over South Carolina. Reeves is a 7-foot-1, 238-pound center; he plays his prep ball for the powerhouse Oak Hill Academy. Currently, 247 Sports ranks Reeves as a 3-star prospect and the No. 34 center in the class.

Duke’s 2022 class, the first for coach-in-waiting Jon Scheyer, now sits at six. Reeves is the third center in the class, too: along with 5-stars Dereck Lively and Kyle Filipowski. Lively and Filipowski will obviously play together a fair amount next season; however, the play is for Reeves to redshirt in the 2022-23 season.

Of course, sophomore center Mark Williams will likely depart for the 2022 NBA Draft. Fifth-year senior Theo John will move on after the season, too.

With this as the plan, Reeves gets a full year in Duke’s system and strength and condition program, which is big. It also builds depth for the Blue Devils beyond 2023.

5-star small forward Dariq Whitehead and Mitchell will both play together a lot next season, too. In fact, most Duke lineups should feature those two together — floating between the 2-3-4. That really will be an awesome duo; those are two rangy hybrid wings who can do a lot of different stuff.

Shooting guard Jaden Schutt, a 4-star prospect and an excellent 3-point shooter, will see time on the wing as well.

While Jeremy Roach could return for the 2022-23 season, Duke could still be in the market for a point guard, one way or the other. Roach is a solid player and guards plenty of opposing point guards; however, Trevor Keels and Wendell Moore Jr. are the team’s primary creators. Roach is more of a spot-up player on offense. Keels is also the team’s top point-of-attack-defender.

Freshman Jaylen Blakes is at the backend of Duke’s rotation for the 2021-22 season. He’s had some nice moments, though, mostly as an energy guy off the bench. Blakes projects out as a solid multi-year program player.

Duke’s lone 2023 commitment — 5-star point guard Caleb Foster — could reclassify to 2022, too. That almost makes too much sense. Foster is currently a top-10 overall prospect for 2023.

Reeves and Forster are teammates together at Oak Hill.

Blue Devils up to No. 2 in this week’s AP Poll