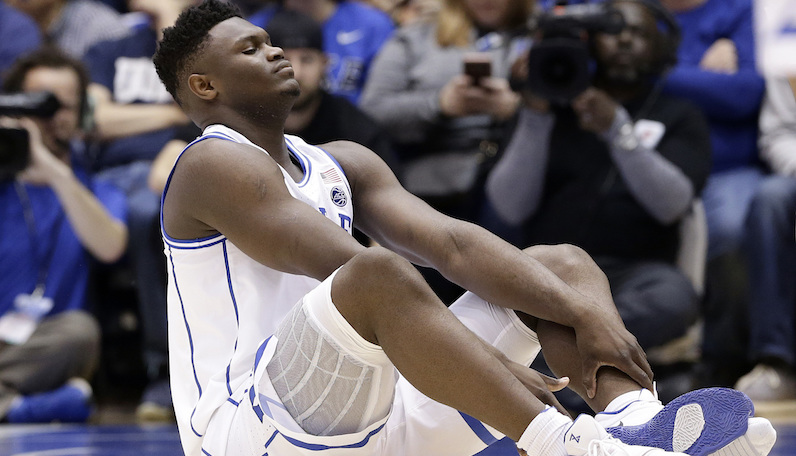 Duke's Zion Williamson sits on the floor following a injury during the first half of an NCAA college basketball game against North Carolina in Durham, N.C., Wednesday, Feb. 20, 2019. (AP Photo/Gerry Broome)

On Thursday evening Duke basketball tweeted from its official account the news that everyone had waited on. Infamously injured the night before on the first possession of the game against North Carolina, Zion Williamson has been diagnosed with a grade 1 sprain to his right knee.

Williamson drove to the middle of the floor on Duke’s first possession, and tried to make a cut. Inexplicably, however, his shoe gave out — literally ripping apart. (Williamson was wearing the signature shoe of NBA MVP candidate Paul George, who reached out to both Nike and Mike Krzyzewski after the incident.)

As of Thursday, Williamson is listed as day-to-day.

NEWS: Zion Williamson was diagnosed with a Grade 1 right knee sprain. He is progressing as expected, and his status is day-to-day. pic.twitter.com/H8YUZGnOyc

And while Duke coach Mike Krzyzewski wasn’t able to over any specifics on Williamson’s return, he is optimistic.

I think that everyone wants to know his status, and it’s still — we don’t have a timetable, but the preliminary reports that we have on Zion’s injury are all optimistic — very, very good. And the fact that it’s a stable condition, a mild sprain, and we’re going to do what everyone would do, and that’s what’s in the best interest of the young man. And Zion will get proper care. He’s getting it today, as this moves along these next 24, 48 hours, we’ll have a better feel for things, but there’s no rush. You want to make sure he’s completely at 100 percent.

(Note: Those comments were made on Krzyzewski’s weekly show on ESPNU Radio on SiriusXM.)

Duke is in action next on Saturday, at Syracuse. Earlier this season in Durham, Duke lost to Syracuse is overtime after Tre Jones exited with an injury, too. After Williamson’s injury, Duke slumped against North Carolina, falling 88-72. (Williamson is also covered by an insurance policy to protect against potential lost draft value.)

Obviously, there’s no official word yet on whether or not Williamson will play. Plenty of people have certainly weighed in on what he should do.

The debate over whether Zion or any player should “shut it down” is solely about risk. Is there significant risk to the player’s health or to the player’s long-term financial future? If not, play. The rest is just a value judgment. pic.twitter.com/UdoB17MlRM

However, regardless of when he takes the floor next, it’s important to hear that the top player in the country and the future No. 1 NBA Draft pick didn’t suffer any serious career-altering damage.

Williamson dominates above the rim in unprecedented fashion