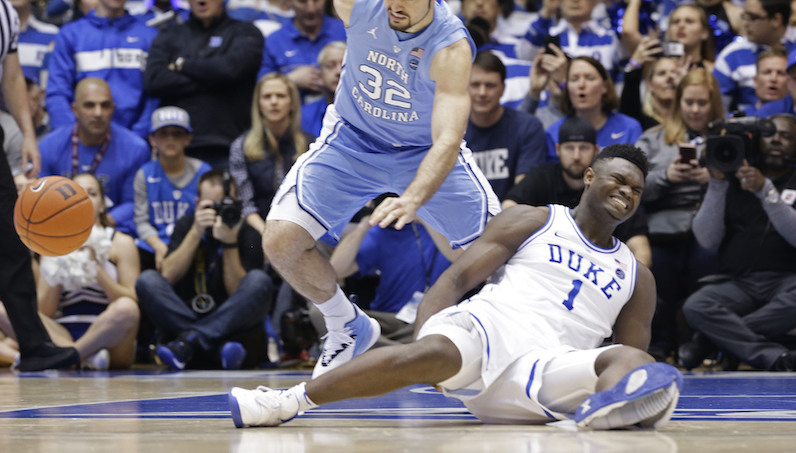 Duke's Zion Williamson (1) falls to the floor with an injury while chasing the ball with North Carolina's Luke Maye (32) during the first half of an NCAA college basketball game in Durham, N.C., Wednesday, Feb. 20, 2019. (AP Photo/Gerry Broome)

According Jeff Goodman, Duke phenom Zion Williamson (right knee) will not play against Syracuse on Saturday night. Williamson now famously injured his right knee less than 40 seconds into the game against North Carolina on Wednesday.

On Thursday, Williamson’s injury, suffered after his shoe ripped, was diagnosed with a Grade 1 knee sprain, and listed as day-to-day; according to Goodman, though, he will not return to the floor this weekend. Syracuse hosts Duke with a tip-off time set for 6 p.m.

Duke’s Zion Williamson will not play tomorrow at Syracuse, source told @Stadium. Suffered knee injury against North Carolina and is listed as day-to-day with a Grade 1 knee sprain.

This will be the second meeting between the two teams this season; back in January, Syracuse upset Duke in Durham. Duke point guard Tre Jones left that game early on with an injury, too. Duke was also without the services of Cam Reddish that night; the one-and-done wing sat due to feeling under the weather.

Duke’s next game after Syracuse comes next Tuesday. It’s another road game, too: No. 22 Virginia Tech.

How Duke’s freshman phenom dominates the game in unprecedented fashion