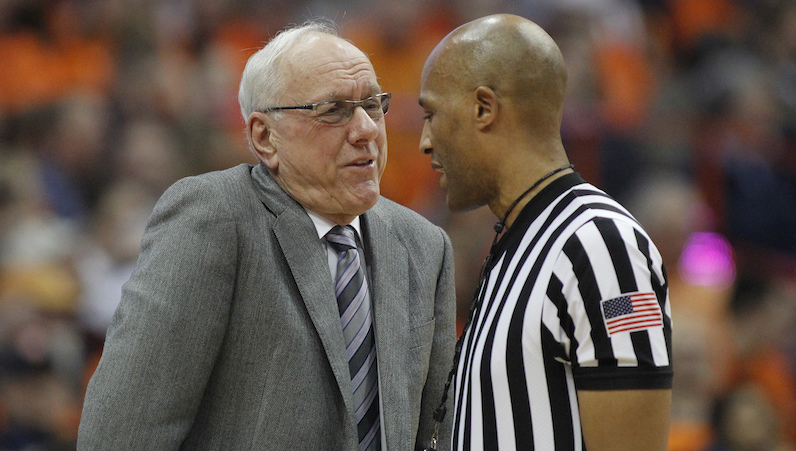 Syracuse head coach Jim Boeheim, left, talks to an official about a call during the second half of an NCAA college basketball game against Louisville in Syracuse, N.Y., Wednesday, Feb. 20, 2019. Syracuse won 69-49. (AP Photo/Nick Lisi)

According to a report from Douglass Dowty of Syracuse.com and The Post-Standard, Syracuse basketball coach Jim Boeheim was involved in a car accident. Around midnight, he hit a man with his car who was walking outside of his vehicle on I-690.

As Dowty reports, his source says that prior to Boeheim, Jorge Jimenez, 51, had been in a car with four other people. That car crash was due to bad winter weather. Per Dowty:

The man at some point got out of his vehicle, the source said.

That’s when Boeheim drove by and struck the pedestrian, the source said.

More information has come out on the accident; Boeheim’s vehicle attempted to avoid the car that had contained Jimenez. That action caused him to strike Jimenez. Boeheim was reportedly returning home after a dinner with his wife and some friends.

A police statement revealed that tield sobriety and alcohol sensor tests were performed on Boeheim and the driver of the other vehicle. Both results came back negative. Later in the morning on Thursday, Boeheim issued this statement:

I am heartbroken that a member of our community died as the result of last night’s accident,” he said. “(Boeheim’s wife) Juli and I extend our deepest sympathies to the Jimenez family. Out of respect for those involved, I will not be providing further comment at this time.

Earlier in the evening on Wednesday, Syracuse defeated Louisville by 20 points, 69-49.