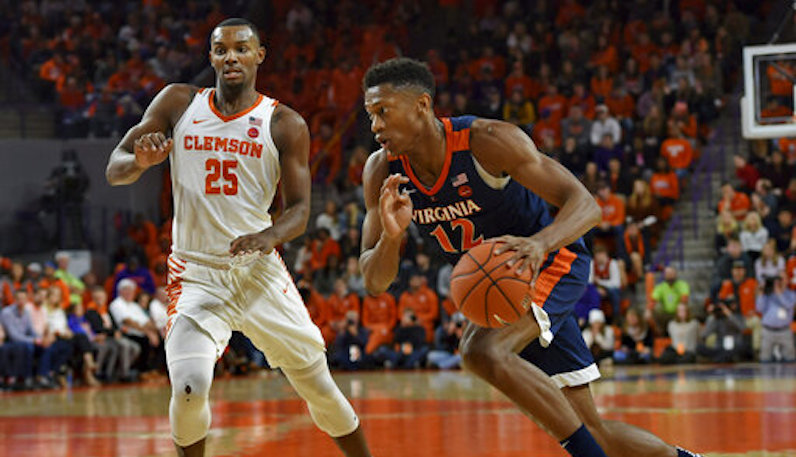 Virginia's De'Andre Hunter drives down the baseline while defended by Clemson's Aamir Simms during the first half of an NCAA college basketball game Saturday, Jan. 12, 2019, in Clemson, S.C. (AP Photo/Richard Shiro)

It’s the middle of January, and every team in the ACC has played three conference games. With another large set of games on the docket for this week — starting Monday night — let’s take a look at the latest batch of ACC Basketball Power Rankings.

Nearly 37 percent of Duke’s field goal attempts in the win over Florida State came from beyond the arc. With Cam Reddish shaking off a slump, Duke had one of its best 3-point performances in a while: 11-of-24 (45.8 3P%). That last of those makes was pretty important, too.

Reddish hit five 3-pointers — two of which were assisted by Jones. That’s big for a Duke team that’s struggled on spot-up attempts: 0.8 points per possession, according to Synergy.

Virginia connected on just 38.2 percent of its 2-point attempts in its dominant win over Clemson. The Cavaliers, however, did basically everything else well, including hitting 10 3-pointers (43.5 3P%) and recording only eight turnovers (13.1 percent TO rate).

As usual, UVA was suffocating defensively: 0.7 points per possession (28.7 eFG% for Clemson). In terms of effective shooting, this was Clemson’s worst performance of the season.

Also, Braxton Key continues to work his way in as one of the top glue guys in the ACC: seven points, eight rebounds, three assists and two steals. He helps fill in the gaps for Virginia.

Key's rebounding has been outstanding. That's something that is SO important for him to bring to the team.

The top matchups in the ACC this week center on the Mother of State: Virginia Tech at Virginia on Tuesday night, and then UVA at Duke on Saturday. For Virginia and VT, this will be the first time the two rivals have faced off since last February, when Tech pulled out an improbable comeback win in Charlottesville. That doubles as Virginia’s only ACC loss in its last 24 regular season conference games.

There are currently only five Division I players averaging under 20 minutes and 11+ points per game. After his 24 points and 10 rebounds (six on offense) against Duke, super-sub Mfiondu Kabengele is one of those five, and the ACC’s lone representative on that list. Kabengele is an excellent rebounder (11.2 rebounds per 40 minutes); he’s grabbed 13.2 percent of available offensive rebounds while on the floor, which ranks 75th nationally, per KenPom. According to Synergy, the sophomore center is shooting 65 percent on put-backs after offensive rebounds.

This team continues to pen a story as one of the most likable teams in college hoops. The road win over UNC is the second victory against a top-10 KenPom team this season for Chris Mack and the Cards. Louisville get another solid performance from one of the league’s unsung heroes, too: Dwayne Sutton.

Despite an ejection to Wyatt Walker and a first-half injury that cost Markell Johnson most of the game (after a really nasty fall), NC State managed to defeat a frisky Pitt team last Saturday. The key difference-makers were Eric Lockett — 17 points, three 3-pointers, including two second-half bombs — and D.J. Funderburk.

Funderburk, who continues to impress, has length, speed and some really nice bounce to his game; he’s more athletic than a lot of college centers, which allows him to hunt for points at the rim (68.1 2P%) — in transition, as a roller and on the glass.

In the win over Pitt, Funderburk kept NC State afloat in the second half with second-chance opportunities. He finished the game with a career-high six offensive rebounds.

Nassir Little now had 6 ball-handling turnovers, 2nd on the team to Coby White's 10. No other Heel has more than 3.

Louisville did well to limit the Heels on the offensive glass, too; this rarely happens under Roy Williams, but when it does — combined with a cold shooting performance — it’s a serious problem.

UNC is outshot about 1/3 of the time, but still wins almost half of those games thanks to rebounding, they only win 16% of the time if they lose on the boards too

(Random note: Leaky Black keeps doing nice things; I’m buying all of the stock that I can here.)

Scoring only 59 points and losing at home to Georgia Tech isn’t exactly a great look for a team that entered the 2018-19 season with big expectations. For the year, Syracuse continues to slump from deep — 29.6 percent on 3-point attempts, good for No. 324 in the nation.

There are currently six players on Syracuse’s roster with 15+ 3-point attempts — five of which are shooting under 30 percent from downtown.

The win over Syracuse on the road was significant for Georgia Tech and Josh Pastner. The Yellow Jackets shot well from the field (66.7 eFG%) and did their thing defensively — 0.84 points per possession for the Orange. James Banks chipped in with three more blocks, too. He continues to build a case as one of the top defenders in the ACC.

It has come against some good competition, but Clemson has lost three straight games to start ACC play: Duke, Syracuse and Virginia. In all three of those games, the Tigers have scored well under one point per possession (0.7 points per possession against UVA), which just isn’t going to cut it. The veteran backcourt of Marquise Reed and Shelton Mitchell are a combined 6-of-24 on 3-point attempts (25 3P%) in those three games.

Notre Dame got its first conference win of the season at home last week over Boston College, 69-66. Mike Brey played just six players with T.J. Gibbs and Juwan Durham on the shelf. With such a tiny rotation, it’s important to stay out of foul trouble. Well, BC attempted just 10 free throws in defeat — with Ky Bowman accounting for five of those attempts. Notre Dame’s defense has all kinds of issues, but the Irish rank No. 1 nationally in opponent free throw attempt rate: 19 percent.

If Pittsburgh could’ve kept NC State off the offensive glass (45.7 percent offensive rebound rate), the Panthers would’ve picked up a signature road win for Jeff Capel. Regardless, this team continues to gel nicely under the first-year coach. Pitt again got big games from Xavier Johnson — 25 points, 9-of-11 free throw attempts — and Au’Diese Tony — 17 points and six rebounds. This team could be a serious thorn in the side of ACC competition.

Led by Chris Lykes — 25 points (14-of-14 FTA — Miami landed its first ACC win of the season, taking down Wake Forest 76-65. Miami’s seven-man rotation got the job done on its home floor with an excellent shooting performance (59.4 eFG%), including 11-of-25 on 3-point attempts. Can the Canes keep it up against tougher competition? Miami hosts UNC on Saturday — the team’s lone game this week.

The Eagles are winless in ACC play, and are in the midst of a four-game losing streak that extends back to Dec. 31. Ky Bowman is playing big minutes (38.7 per game) and using plenty of possessions; he ranks No. 199 in the nation with a usage rate of 27 percent, according to KenPom. However, even with the contributions of freshman Wynston Tabbs, it’s just not enough. Steffon Mitchell is missed, too. (As is Jerome Robinson, obviously)

Wake Forest is 7-8 (0-3 ACC) on the season, and over the next eight days, the Demon Deacons have games with three top-20 teams — two of which take place on the road: NC State, at Virginia Tech and at Virginia. Gulp. Buckle up.

Inside The Playbook: How Duke got Cam Reddish so wide open