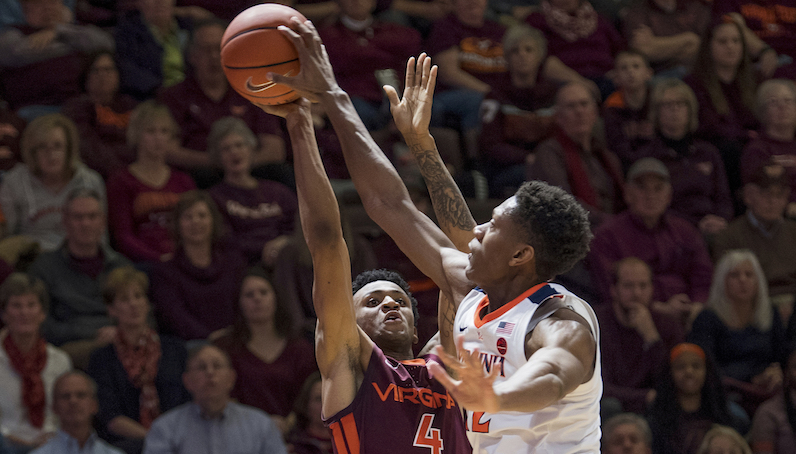 Big Monday delivered with another fun top-25 matchup in the ACC with No. 3 Virginia snagging a road win at No. 22 Virginia Tech. Let’s take a quick look at how both teams executed half-court offense and how NBA prospects De’Andre Hunter and Nickeil Alexander-Walker faired against one another.

By some metrics, this was a crips offensive performance for UVA; the Cavaliers hit 11 3-pointers (40.7 3P%), shot above 52 percent from inside the arc (57 eFG%) and assisted on 61 percent of their field goals. Virginia also rebounded 40 percent of its misses, too, which is the team’s second best single-game number in an ACC contest this season.

This was also a sloppier game, at times, for the Hoos. Virginia turned the ball over 13 times — a turnover rate of 22 percent, one of the four worst outings for UVA this season. Eight of those five turnovers came in the first half — a massive number, and perhaps one of the reasons Tony Bennett went heavy on its mover-blocker/sides offense in the second half. (Thanks again to Jordan Sperber for his chart work.)

– 34 plays of their traditional Blocker-Move (aka "Sides") for 29 points
– 13 plays of Continuity Ball Screen for 19 points pic.twitter.com/GJPKsZqYZ8

Normally, the though process in basketball is: the fewer screens/passes in a possession, the lower the turnover rate. For example: In the NBA, the Charlotte Hornets are routinely one of the lowest-turnover teams in the league, in part because they’ve build a pick-and-roll offense around a high-volume shooter — Kemba Walker. You can’t turn the ball over if you’re shooting it instead. Obviously, there are exceptions to this on both sides of the rule, though.

However, my assumption Bennett — frustrated with a lackluster first half (Hunter was limited due to foul trouble, which should be noted) — wanted his team to get back to basics, and operate from its most comfortable sets. An X and O security blanket, if you will.

As has been much discussed this season, Virginia has diversified its offense this season. The Cavaliers have dialed back on the mover-blocker offense, to an extant, to allow for more dribble penetration via its continuity ball screen (CBS) approach and straight mid-post isolations for Hunter.

Sperber notes this in his chart from last night: Virginia’s CBS attack was efficient, scoring nearly 1.5 points per possession.

This type of offense allows Virginia the ability to move the ball side-to-side with passes and dribble penetration. UVA look to get north-south and create some advantage as defenders navigate ball screens. When defenses have to switch, mismatches are created; and when defenses fight to get over or under ball screens, driving lanes to the hoop open up.

I’d also like to point out some masterful coaching and play design/execution by Virginia to end the first half, too. This one would make Gregg Popovich and the San Antonio Spurs proud.

Up by only two points after Nickeil Alexander-Walker spilt two free throws, UVA got the ball back with 48 seconds remaining. This opened up the 2-for-1 opportunity; if Virginia could get a shot up with enough time remaining, they could guarantee themselves one more possessions to close the first 20 minutes.

Virginia comes out in one of its CBS looks — Guy swings the ball to Kihei Clark as Braxton Key lifts over for what looks like a ball screen. Clark, however, rejects the screen and drives the baseline hard — with a purpose. After his pass, Guy lingers for a second as he watches Clark. Once he sees Clark turn the corner, he sprints to the weak-side corner.

Black belt-level screener Jack Salt is more than happy to hit Guy’s defender with a the hammer/back screen, which creates an open pocket of space.

The timing of this play is wonderful; two sides of action moving at the same time. It requires high-level synchronicity to pull this type of action off. Impressive stuff.

It’s really, really unfortunate that Justin Robinson’s injury — suffered late in Virginia Tech’s 12-point win over Miami — continues to linger and hinder the ceiling for this team. At full strength, this is a gorgeous offense that plays with flow to target the rim and 3-point line. Without Robinson, though, everything shifts around.

Nickeil Alexander-Walker is put on ball and asked to generate more offense; one of the best secondary creators and passers in college hoops has to alter his game. Robinson is an expert pick-and-roll point guard; he can split traps and play powerful downhill slash-and-kick basketball.

Buzz Williams and the Hokies have reoriented aspects of the offense. Tech plays through the post games of Alexander-Walker and Kerry Blackshear Jr., who continues to play excellent ball in the absence of Robinson.

On Monday night, the Hokies opened the game with a side post-up for NAW, and ran cutters off the future first round pick. It produced several good looks at the rim.

A few possessions later, it’s a similar setup for Alexander-Walker. This time, though, after his entry pass, Ahmed Hill cuts over the top, instead of baseline. This effectively splits Virginia’s defense as Ty Outlaw (46.8 3P%) loops around Hill and curls around Blackshear’s screen toward NAW. Guy and Jerome run into one another, and Hill is open for the easy finish.

Blackshear to the basket

Another key part of Tech’s offense sans Robinson is the mid-post flash set for Blackshear. The veteran big will lift up to the nail and receive an entry pass from up top. After that, two Hokies will scissor cut off Blackshear, looking for handoffs. This can get Tech into some good offense, like this screen-roll look with Hill.

If neither of those looks are there, Blackshear has several secondary options. He can look to pass the ball over the top to one of the cutters. He also has the ability to turn and face-up for his own shot. Tech likes to flash Alexander-Walker on these sets, too, although it can be more of a challenge to get to that without Robinson.

According to Synergy, Virginia Tech has scored 1.28 points per possession (61.8 eFG%) when Blackshear has passed out of a post-up this season.

I don’t have the game charted, but this action was run countless times, and may have even been Tech’s most used half-court look. By the end of the game, Virginia started to find ways to disrupt the play, too. Hey, speaking of…

The ACC is littered this season with future NBA talent, including several guy that will hear their names called by Adam Silver on June 20. At least two of those guys — De’Andre Hunter and Nickeil Alexander-Walker — saw the floor at Cassell Coliseum on Monday, and spent portions of the game matched up, which was fun.

Hunter, who also spent time on Blackshear after a switch (this dude is versatile), was relentless while matched up with the Canadian wing. With under eight to play in the second half, Hunter used his wingspan (six steals in the last five games) to jump that handoff action with Blackshear and Alexander-Walker, which he punctuated on the other end with a slam.

At the end of the game — with VT feverishly trying to mount a late, desperate comeback — Hunter stayed with NAW stride for stride. This is one of the reasons I’m bullish on Hunter as a defender despite the lack of steals/blocks: he’s long, makes himself bigger and can simply get ball handlers in front of him.

Good and bad with Hunter here. Stays on NAW's hip on the closeout contain to contest but no effort to finish the play on the OREB. pic.twitter.com/1Fs3P20ECm

According to Synergy’s matchup data, Alexander-Walker went 0-of-5 on attempts with Hunter as the primary defender. It was almost humorous to see the light go off in Alexander-Walker’s head when he had a more favorable matchup: “OK, time to attack.” Here he bullies Jerome and gets back to the left for a finish in the paint.

This wasn’t exactly the best outing for either player, though. Alexander-Walker threw a couple gorgeous cross-court laser passes early in the game, including one with his left hand (something he has a knack for doing). He also went 4-of-6 shooting at the rim; however, NAW also missed all six 3-point attempts and half of his free throw attempts (3-of-6 FTA).

Hunter played just 26 minutes in this game due to foul issues in the first half; he also missed his lone 3-point attempt. On only a few occasions did Virginia isolate him in the mid-point. Hunter scored once early in the game from that look, and should’ve drawn a shooting foul in the second half from a similar possession.

One last thing from this game, quickly. It’s hard to watch a full Ty Jerome game without noticing his ability to score one-on-one from wacky distances and angles, as my guy Cole Zwicker noted last night.

Jerome's go-to move at the next level (expect him to get a shot) is going to be running off floppy and curling to take an off-beat runner 5 feet outside of where most players even start the process. And they will all go in.

Here are a couple recent examples from the Duke and North Carolina games.

Jerome doesn’t have an explosive first step; however, by leveraging the threat of his 3-point shot, the junior guard keeps defenders off balance. This is enough to create angles for Jerome, which he uses to get to his wacky sweet spots.

Jerome had three floater finishes against UVA to go with his three 3-pointers. This type of shot creation gives Virginia one more outlet — along with Hunter — when things bog down offensively.

After the Virginia Tech game, Jerome is now shooting 43.8 percent on floaters from 5-12 feet away from the basket.

Cavs, Hokies last at No. 2 and No. 4, respectively, in this week’s power rankings