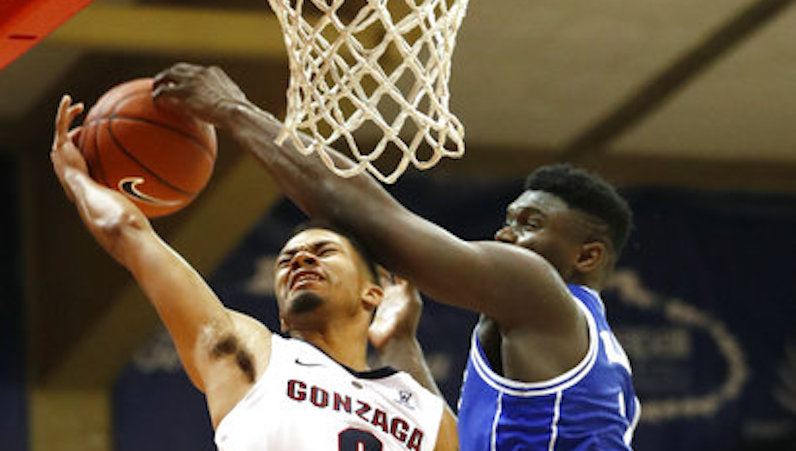 We all like defense, right? Or, well, we at least appreciate it, yeah? (Yes, Virginia fans, we get it: you guys *really* enjoy defense and shot clock violations.) After a month of college hoops action, let’s take a look at a stock report. No, not that depressing stock report involving Tarif Man. I’m talking about basketball and STOCKS — steals and blocks.

Combining those two statistics is a solid tool for evaluating the defensive upside of draft prospects. Basically, it creates one statistic that can better represent defensive impact on a player. Obviously, blocks and steals aren’t the only things that account for value on that end of the floor. However, it’s an indicator of length, activity and defensive intuition. At the quarter pole of the season, let’s take a look at who is doing a good job collecting STOCKS in the ACC.

According to Sports Reference, there are 10 players in the ACC this season (minimum of 75 minutes) that have block rates of two percent or better and a steal rate of at least three percent. Some of the names here, like Zion Williamson, will absolutely not surprise you.

The parameters on these filters are sort of arbitrary, and leave off some guys that have been impact players on defense. (Sorry, mates.) For instance, at Georgia Tech James Banks currently leads the ACC in block rate, 10.9 percent, and his 14 blocks would rate pretty well in terms of STOCKS. However, he’s yet to record a steal.

Wake Forest’s Jaylen Hoard has 12 STOCKS, but his rates — 1.9 percent steal rate and 2.9 percent block rate — place him just outside this list. That could all change, though, after Thursday’s matchup with Charlotte.

Pop-up Art: A quick look at the pressure De’Andre Hunter & Kyle Guy put on a defense