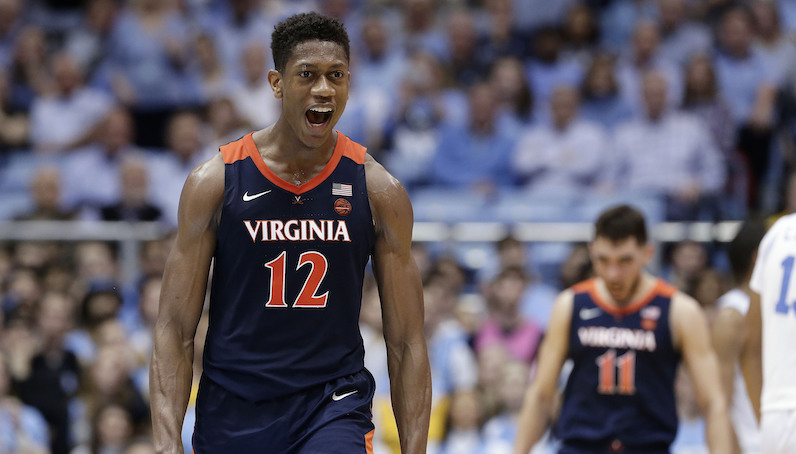 The last three days had to be a grind for Virginia basketball. It’s one thing to play Duke and North Carolina with only one day in between; however, it’s another when that comes with a mountain of media attention, too. ESPN College Gameday was in Charlottesville; that comes with certain obligations. LeBron Freaking James is flying in for games; then on Monday night, by the way, there’s Michael Jordan sitting courtside, too.

Kyle Guy answers @cwdarney’s Q about what it’s like for @UVAMensHoops to play in front of LeBron James & Michael Jordan in back-to-back games.

“That just says a lot about what this program is. It’s no longer just #Duke and Carolina. We’re in that conversation.” pic.twitter.com/lsa1GhRVv4

Maybe I’m projecting, but the thought of all of that — combined with the highs and lows of winning and defeat — seems exhausting. (I mean, it’s definitely really, really cool, too, but it’s just a lot.) If that type of emotional roller coaster doesn’t get a team ready for March, I don’t know what will. And through all of that, Virginia held tough.

Tony Bennett is breaking down the game and looks up and sees highlights of Duke-UVA (for some reason) on ESPN. "What's that doing on in here?"

Every player in Virginia’s eight-man rotation has a role to play, and it certainly took a team effort to win in Chapel Hill on Monday night.

With less than nine minutes to play, Virginia trailed UNC by seven, 55-48. This team had every reason to throw in the towel and get on the bus back to C’Ville. To the surprise of no one, though, that didn’t happen.

Virginia’s defense travels, man, and it really tightened up down the stretch. Also: De’Andre Hunter, Ty Jerome and Kyle Guy — outside of Duke — are about as good as it gets in college hoops. (In this week’s power rankings, I touched on Jerome’s playmaking. Now, I want to focus a two quick thoughts on Hunter and Guy.)

By his own lofty standards, Kyle Guy had struggled from deep in the three games prior to UNC. Guy went a combined 6-of-22 on 3-point attempts (27.3 3P%) against NC State, Miami and Duke. When Virginia absolutely had to have it at UNC, though, Guy snapped back in a positive direction. In those three games, Guy went just 4-of-17 on catch-and-shoot 3PA (23.5 3P%), according to Synergy Sports.

The junior sniper splashed 5-of-9 3-point attempts, including 4-of-7 (57.1 3P%) off the catch, per Synergy. As we all know, Guy — one of the nation’s premier shooters — never stops moving without the basketball.

Late in the game, he hit two massive 3-balls, one of which went for a four-point play. However, I want to focus another play with around two minutes to left in the contest. After a timeout and a UNC turnover, Virginia had the ball, clinging to a two-point lead.

All season, Virginia has used an elevator door play play to get Guy open catch-and-shoot looks. It’s worked like a charm, too. After Duke’s win over UVA in Durham, Mike Krzyzewski mentioned just how much his team had prepared to stop this play. When it was called, however, Guy still found daylight and made them pay.

Let’s go back to Monday night in the Dean Dome. It’s another leverage situation, late in the game. Kenny Williams is checking Guy, and Virginia, from its inside triangle look, appears to be ready to run the elevator up, again. Williams sees it developing, but that’s exactly what Virginia wanted.

Guy fakes like his headed to the double screen from Hunter and Braxton Key, which gets Williams leaning the wrong way. And instead he races to the near corner off Jay Huff’s screen — bottoms. Watch the reaction fo Williams after the hit — he know what just went down.

Earlier in the game, there was another first-half possession for Virginia that reinforced just how tricky it is to defend Hunter as a screener. UVA has shown a more diversified offense this season; however, it’s baseline approach is its mover-blocker/sides approach.

This play looks more like a generic motion approach; Hunter and Mamadi Diakite set down screens for Guy and Kihei Clark. Hunter and Guy are spaced to the weak side of the floor, which puts Luke Maye — Hunter’s defender — in a serious bind: Where’s the help defense?

Guy curls hard with one aggressive dribble to the middle of the paint. With Cameron Johnson trailing on the play, this means Maye has to help. Meanwhile, as this is going on, Hunter calmly spaces out beyond the arc — wide open now for a 3-pointer. It’s an easy read for Guy.

This type of stuff is one of the main reasons I very much enjoy watching Virginia play basketball. The Cavaliers can take the principles of an egalitarian half-court offense and use them to play matchup/two-man basketball with high-level talent. (I wrote about this earlier in the season, too, the Hunter-Guy pairing, specifically.)

Hunter — who also picked up Coby White for a few possessions late in the game — was massive for Virginia down the stretch, too. Similar to how they like to dial up stuff for Guy, Tony Bennett has stuff for Hunter as well. Virginia will spread the floor, use that inside triangle look and attack that middle third with Hunter face-up drives.

Hunter: 2-3 FGA on isolations. Jab step gets B-Rob off balance and Dre's able to get all of the way to the rim. pic.twitter.com/Je1Ffr5TOY

After running the Duke-UNC gauntlet, Virginia gets a few days to rest up before it hosts Notre Dame on Saturday. The Cavs thrashed the Irish a few weeks back, up in South Bend, scoring over 1.3 points per possession and winning 82-55.

Recovery time should do UVA well, especially as Jerome continues to find his footing while dealing with a back injury. After that, it’s a rivalry matchup next Monday with Virginia Tech. Buckle up.

Ty Jerome, Virginia land at No. 2 in this week’s power rankings