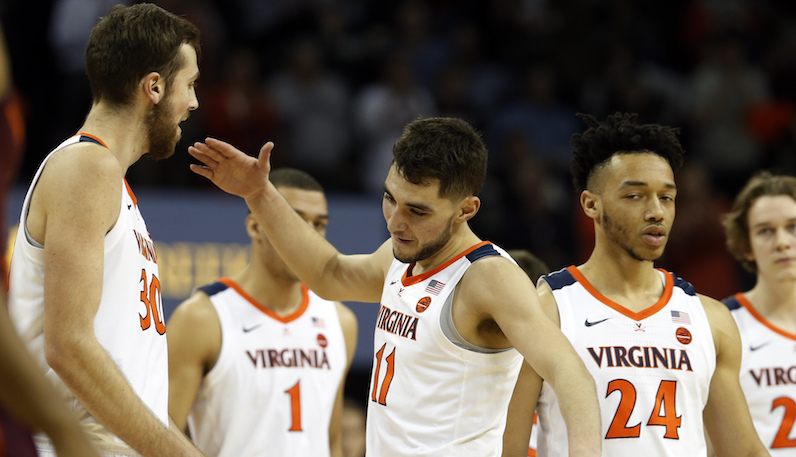 ACC Bracketology, One Number to Know is back! In this week’s edition, we’ll take a look at Virginia’s Jay Huff, Leaky Black, Duke’s power on the offensive glass and why we’re still bullish on sharpshooting Virginia Tech. Plus a whole lot more; dive in.

Don’t look now, but Virginia has another asset on offense. There was already plenty of firepower on this Virginia roster, which ranks No. 4 nationally in adjusted offensive efficiency; however, redshirt sophomore center Jay Huff gives UVA another versatile angle to pry at opponent defenses.

Virginia already has a pretty crowded frontcourt, especially at the center position where there’s less flexibility. Jack Salt and Mamadi Diakite will continue to get big minutes; it helps that those two can play together, too, although if Salt and Diakite share the floor, spacing gets tighter offensively with two non-shooters clogging the paint.

Whatever minutes are left to spare, though, Huff is making a case for all of them. As Spencer Percy of Queen City Hoops would say, Huff’s a bit of a mystery; his minutes and attention to detail on defense fluctuate. Recently, though, Huff has really given Virginia solid production offensively.

Look, we won’t make any comparisons to Clint Capela, but Huff (1.85 points per possession on spot-ups, per Synergy) gives UVA some added vertical spacing on offense; that’s a new toy, and it’s a help when possessions start to bog down. Just throw it up.

If he can stay above water defensively (UVA could try more conservative ball screen defense with him out there), it’s well worth Tony Bennett giving Huff increased minutes and usage — he can be such an added bonus offensively.

If you weren’t aware, this Duke team is very good, but also not so good at 3-point shooting. The Blue Devils rank 218th nationally in 3-point attempt rate (37 percent); on those limited attempts, Duke has shot 31.2 percent, which ranks 294th in 3-point percentage.

They’ve found other ways to manage offensive efficiency, though; it certainly helps to have Zion Williamson flying around doing cool, outstanding stuff. Also: Similar to last year’s team, Duke has been great on the offensive glass.

So far this season, Duke has rebounded 38.3 percent of its own misses — No. 4 in the nation, tops among ACC teams. To the surprise of no one, Zion is great here: 13.9 percent offensive rebound rate.

These can turn into easy offense, too. As a team, Duke has scored 1.29 points per possession (65.5 FG%) on put-back attempts (No. 14 in the nation) after an offensive rebound, per Synergy Sports. Williamson, Marques Bolden and Javin DeLaurier are all shooting above 64 percent on put-back attempts.

There’s a lot to like with this freshman class at UNC. Coby White is a stud who can get to wherever he wants on the floor — 27 percent usage rate, 58.1 percent true shooting. After an uneven start to the season, Nassir Little (74 FG% at the rim) has come on recently, too. There’s a third guy, too, though: Leaky Black.

He’s played just 213 minutes this season in North Carolina’s crowded wing rotation, but I continue to buy all the Leaky Black — 2.4 steals per 40 minutes, 50 3P% — stock.

After Virginia Tech’s second ACC loss in the last 10 days — Virginia and UNC — there’s some skepticism around the Hokies. Some of that can be attributed to Tech’s weak non-conference schedule, which ranked 321st in terms of strength, per KenPom. Health has played a role, too.

(ICYMI) Picked to contend in the ACC in the preseason, is it time to rethink expectations for #Hokies basketball? Players say no, but losses of Chris Clarke, Landers Nolley & now PJ Horne, coupled with two blowout losses to ranked teams raise the question.https://t.co/cT0Vaq35bn

On one side, yes, the defense was problematic; in those two games, both Virginia and North Carolina scored over 1.3 points per possession with effective shooting rates north of 65 percent. Yeah, that’s not going to cut it.

However, I’m not selling this team. I love the outstanding guard play the Hokies have with Justin Robinson and Nickeil Alexander-Walker, and I believe in the small-ball approach employed by Buzz Williams, too.

Guess what — it’s really, really hard to win at UVA and at UNC. That, like, very rarely happens these days. Over the next two weeks, the schedule lightens up, relatively, including match-ups with NC State and Miami, which rank outside the top-70 nationally in weighted defensive efficiency.

So, Christen Cunningham is really good (59.5 eFG%) and one of the better new additions to the ACC this season. After logging 110 career starts at Samford, he’s brought the goods (dude) to Louisville. Cunningham has scored just under 0.9 points per possession (54.7 eFG%) when he’s used a pick-and-roll possession this season, per Synergy.

Christen Cunningham: “I’d be lying if I said it didn’t mean anything to us” being ranked in the top 25. But says Louisville has to keep up its consistency.

He’s also handing out six assists per 40 minutes — with a lot of those dimes going to Louisville’s arsenal of catch-and-shoot artisans, like Jordan Nwora. According to Synergy, when Cunningham passes to a spot-up player out of the screen-roll and that player uses the possession, Louisville has scored 1.18 points per possession (63.3 eFG%), which is outstanding.

Florida State’s defense showed up when it snapped a three-game losing slide with a win this week over Clemson. The Tigers, not exactly a work of art offensively, were held to just one point per possession as star guard Marcquise Reed slumped: 13 points (on 14 FGA) and three turnovers.

In the game, FSU recorded just one block and one steal; however, they held Clemson to only 17 3-point attempts and forced a turnover rate of 16.2 percent.

After a few head-scratching losses — Pitt, Boston College — can Florida State regroup? Up next for the Seminoles: at Miami (Jan. 27) and home to Georgia Tech (Feb. 2).

Obviously to hit its ceiling, NC State needs Markell Johnson. He’s the team’s best playmaker — capable of getting his own shot or creating for others: 11.6 points per game, 7.7 assists per 40 minutes and 70 percent true shooting.

In his absence, though, a variety of guys have stepped up: Braxton Beverly, Devon Daniels, Blake Harris and CJ Bryce. Let’s focus on Bryce for a second, though.

NC State is getting ice cream after a HUGE performance from CJ Bryce (@Trippyyy_Manee) to pull out a 77-73 win over Notre Dame! Here are the immediate takeaways:https://t.co/0X1TjKz7wo

Shooting the basketball has been a struggle fest for several members of Syracuse’s roster this season. Frank Howard, Oshae Brissett, Jalen Carey and Buddy Boeheim all have effective shooting clips under 44 percent.

The formula is simple this year for Syracuse: Defend like crazy inside the zone and hope Tyus Battle and Elijah Hughes (55.3 eFG%) can make enough shots to win. Critics be damned, the zone continues to produce, too. Syracuse ranks 13th nationally in adjusted defensive efficiency and 5th in block rate (17.2 percent). Howard is also No. 82 in the nation in steal rate: 3.5 percent.

According to Synergy, opponent have scored under 0.76 points per possession (44.2 eFG%) against Syracuse’s zone this season. Of the 35 teams that have used zone defense on at least 500 possessions this season, that ranks second in defensive efficiency — only to fellow ACC brethren Georgia Tech.

After a dominant performance vs. UVA, another look at Duke’s R.J. Barrett