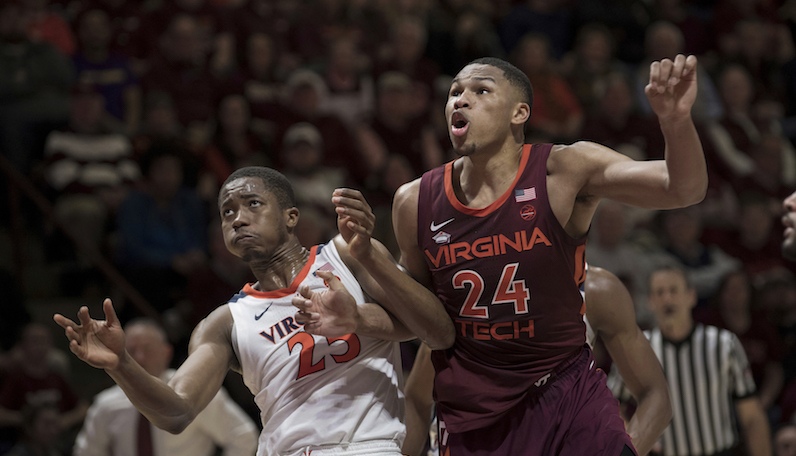 After an All-ACC season in 2018-19 for Kerry Blackshear Jr., change is likely on the horizon for the Virginia Tech center. On Wednesday, Blackshear Jr. entered his name into the 2019 NBA Draft; he plans to at least test the waters. However, that’s not the only possibility he’s consider for next season. Enter John Calipari and the Kentucky Wildcats.

According to multiple reports, Kentucky is also pursuing Blackshear. Kentucky will lose its two starting bigs from its 2018-19 squad — P.J. Washington (a potential lottery pick) and Reid Travis (a grad transfer from Stanford).

Father of Kerry Blackshear Jr. told me he hasn’t spoken to John Calipari or any of his assistants – which doesn’t mean a mutual interest hasn’t been communicated through other channels – “but if Kentucky called, they would be a viable option. Absolutely.” https://t.co/cgp2FREkSp pic.twitter.com/mvMcicZcYw

(In fact, there are some parallels between what Travis brought to UK this season, and what Blackshear — hypothetically — could add next year. Blackshear and EJ Montgomery would give Kentucky some serious power on the inside, again.)

Blackshear emerged this season under Buzz Williams — a double-double threat who could score from all three levels with efficiency. The 6-foot-10 center averaged 14.9 points (58.3 percent true shooting), 7.5 rebounds (10.1 per 40 minutes) and 2.4 assists (19.2 percent assist rate in ACC play).

This guy is very, very good, and there’s a reason why so many programs have contacted Blackshear; it’s not just Kentucky. If Blackshear decides to return to college and transfer, he becomes one of the biggest — if not the biggest — name available. Florida will compete for Blackshear, too.

A monster on the offensive glass (13.7 percent offensive rebound rate), Blackshear is far from a garbage man. He can post up and also stretch opposing defenses out to the 3-point line (33.3 3P%). Put enough shooting around him, and he turns into a very capable pick-and-roll scorer, too.

Blackshear (64.3 FG% at the rim) showed the ability to evolve on the fly this season as well. With the injury to Justin Robinson, Tech had to realign its offense; a big chunk of that was playing through Blackshear in the pinch post. The Hokies would throw the ball to Blackshear and run scissor cuts off of him; if nothing was there, Blackshear had the green light to go get his own shot.

This has obviously been a hectic offseason for Virginia Tech, too. Williams left town for the job at Texas A&M (another possible destination for Blackshear); after a quick search, Mike Young was hired away from Wofford as his replacement. Nickeil Alexander-Walker, predictably, declared for the NBA Draft, which coincides with the departures of seniors Justin Robinson, Ahmed Hill and Ty Outlaw.

Several players also entered the transfer portal, though the Hokies will have former top recruit Landers Nolley back for the 2019-20 season. And the team’s top 2019 signee, Anthony Harris, received a release from his LOI to Tech.

VT plays through the post without point guard Justin Robinson