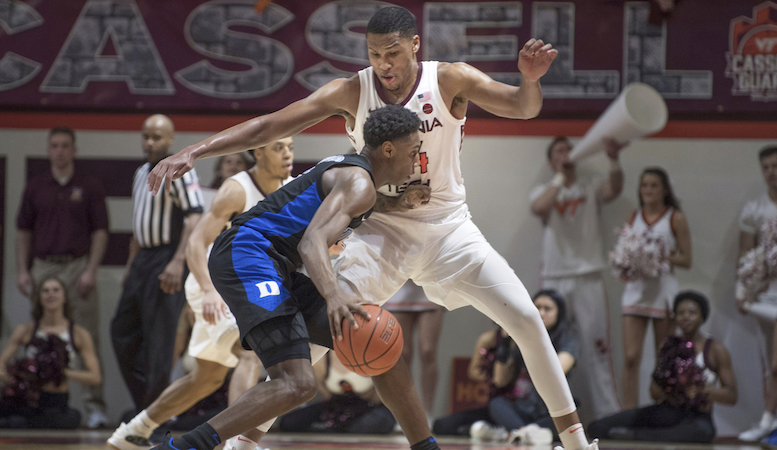 For the second year in a row, Duke fell on the road at Virginia Tech — both times on Feb. 26. Of course, the Blue Devils were without Zion Williamson for, essentially, the third straight game (in case you were unaware). However, this was still a massive victory for a talented Hokies squad that lost its top gear with the injury to Justin Robinson.

Before we move on to the weekend schedule for both clubs, let’s take a quick look back at a few things that went down Tuesday night at Cassell Coliseum, including dynamic performances from the ACC’s top two Canadians: R.J. Barrett and Nickeil Alexander-Walker.

NAW what I mean?

Once again, Alexander-Walker brought forth a balanced, impactful effort for Virginia Tech. As the Hokies have searched for offense sans Robinson, Alexander-Walker has been tasked with a lot of playmaking responsibilities. Recently, we discussed his ability to facilitate out of the side post, which has been featured more prominently in recent weeks. Tech went to some of that last night, too, getting to its split action game as NAW looked for cutters and 3-point shooters.

On the next level, Alexander-Walker likely doesn’t project as a primary ball handler; however, he has upside as a secondary playmaker. As the main creator, NAW has struggled some without Robinson (high turnover rate out of the pick-and-roll), but he’s shown plenty of ingenuity as a driver and a passer, too.

Alexander-Walker plays with great vision; he knows to look opposite and change sides of the floor with a pass. He’s capable of throwing some daring left-handed laser passes, too. On Tuesday, Duke mixed up pick-and-roll coverages on NAW, but the primary approach featured multiple defenders — double teams and traps — on Tech’s top guard.

That’s an outstanding read to find Wabissa Bede. As Duke traps, the Blue Devils zone up on the back side, but can’t account for everyone — someone has to be open. At 6-foot-5, Alexander-Walker can make this pass over the top of multiple defenders.

Alexander-Walker went the distance in this game — scoring 13 points (6-of-8 FTA) in 40 minutes of action. He also dished out six assists — four of which resulted in 3-pointers. He’s now up to 4.5 assists per 40 minutes. Virginia Tech has scored 0.99 points per possession (49.4 eFG%) with NAW as a pick-and-roll passer this season.

While Kerry Blackshear Jr. carried the scoring load (more on him in a minute) against Duke, Alexander-Walker can go get a bucket, too. He’s shooting 49.3 percent (52.2 eFG%) out of the pick-and-roll and 50 percent on drives to the basket from spot-up possessions.

On this play, he gets by Tre Jones — no small feat — with a nice jab-step maneuver. Javin DeLaurier steps up with help defense, but Alexander-Walker freezes him with a nifty little pump fake. This is terrific body control, capped by a soft touch on the finish.

Similar to De’Andre Hunter at UVA, Nickeil Alexander-Walker is Virginia Tech’s talisman on defense; the Hokies can move him around the floor, and feel comfortable with NAW as a switch defender. In the first half alone against Duke, Alexander-Walker spent time on Cam Reddish, R.J. Barrett and Tre Jones.

Alexander-Walker is an impact defender, too, and one of the ACC’s better stocks (steals and blocks) players. In the win over Duke, he swiped four steals, including at least two from Reddish (loose with his dribble, again), and blocked a shot. That’s five more stocks. He now has 15 games of 2+ steals, too.

For the season, Alexander-Walker, who averages 2.5 steals per 40 minutes (a big number), ranks 44th nationally in steal rate: 3.8 percent. There are only five players in the ACC this season with 40+ steals and 10+ blocks, including Alexander-Walker and, of course, Zion.

Without the presence of Justin Robinson, Tech can’t play quite as conventionally in its half-court offense with spread pick-and-roll. Alexander-Walker makes up for some of the difference; however, Buzz Williams and the Hokies have had to reorient things, slightly. Tech inverts and lifts its offense with Kerry Blackshear Jr., who hangs around the nail or the elbows. From here, he works as an efficient offensive hub.

Virginia Tech runs scissor cuts off of him, looking for a lane to the hoop via a handoff. The Hokies went 4-of-5 on attempts after a cut or handoff last night, per Synergy.

If that isn’t there, though, Blackshear can turn, face and look for his own offense, too. According to Synergy, Blackshear is shooting 50 percent on midrange half-court jumpers this season.

However, he’s most effective as a scorer is on the low block. In the 2018-19 season, Blackshear has emerged as one of the top post-up options in the country: 1.1 points per possession (58.3 eFG%), which ranks No. 8 in Division I (minimum 100 possessions). He went 2-of-2 on post-up attempts

Amongst ACC players with at least 50 post-up possessions, only Zion Williamson has been more efficient: 1.3 points per possession.

I loved this effort from Blackshear. Duke is within two points, the upset bid is in jeopardy and the Hokies know where to go with the ball. With two quick power dribbles, Blackshear unearths DeLaurier and creates space in the paint. Through the contact Blackshear finishes with an and-one.

Blackshear went 9-of-11 from the line last night, which is a trend as well. The ACC’s leading offensive rebounder (14.8 offensive rebound rate in league play) has drawn 5.5 fouls per 40 minutes while also shooting over 80 percent in conference action.

This next possession may have been the play of the game, though. After Blackshear’s three-point play, Tech goes side pick-and-roll with he and NAW. Blackshear is shooting above 42 percent from deep in ACC play, which makes him a bear to defend — every spot on the floor is a green light for the veteran big. Reddish switches and must be aware of that. However, watch this move: rocker step and go. Before anyone can blink, Blackshear is at the rim for his 12th dunk of the season.

RJ Barrett: Gives it all

Even in defeat, RJ Barrett shrugged off a sluggish first half to finish with 21 points, (7-of-9 2PA), 6 assists and one turnover. According to Synergy, the lefty was 4-of-5 on attempts after an isolation or pick-and-roll possession. He accomplished a lot of this work against a Tech defense that was hellbent on trying to keep him out of the lane. The Hokies routinely sent multiple defenders at Barrett, and he still made it work.

As they did last season with Trevon Duval, the Hokies frequently ignored or played way off of Tre Jones in the half court — a troubling new trend for the Blue Devils. This is a whole other conversation, but Duke can do things to counter some of that realignment, like using Jones a screener; however, until Williamson returns, it will be up to Barrett to figure out multi-layered defenses. That’s no small task.

In the last three games without Zion, Barrett — playing against increased defensive attention but also with more space in the paint — has been ridiculous. We saw what he did at Syracuse, detonating the zone from the middle third of the floor; according to Synergy, Barrett is now 26-of-31 on attempts (84 FG%) inside of 10 feet over the last three games.

Without Zion, Duke has found transition efficiency and volume far trickier; the Blue Devils recorded just one steal last night — a tiny number for the nation’s No. 1 steals team. When he did get a chance to run, though, Barrett made the most of it with a nifty Eurostep.

Over the last two games, Duke has three total steals with Williamson. Barrett will have to force the issue for Duke to get offense outside the half court.