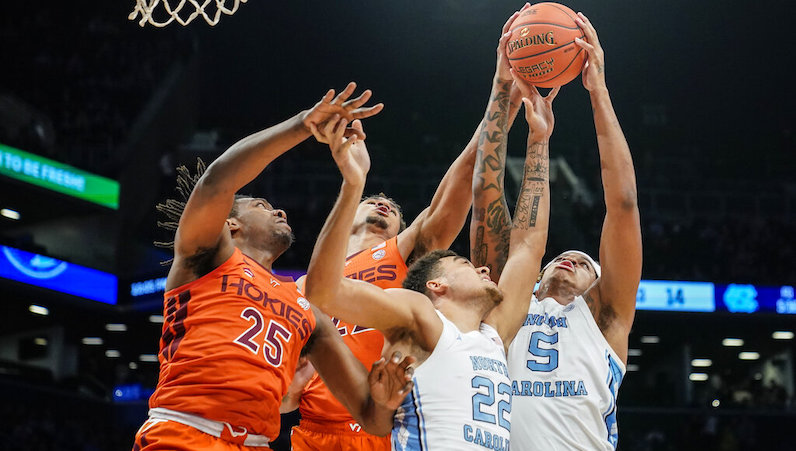 Justyn Mutts and Keve Aluma, one of the top frontcourt duos in college basketball over the last two seasons, will both enter the 2022 NBA Draft. Similarly, both players will maintain their college eligibility, though.

After transferring to Virginia Tech from Wofford in 2019, essentially following Mike Young to the ACC, Aluma redshirted the 2019-20 season. He became eligible for the start of the 2020-21 season, which is when Mutts arrived, too.

During his time at Wofford, Aluma was mostly an industrious rebounder-type; however, he blossomed with the Hokies, turning into one of the top stretch-5s in college basketball.

In Wed. paper, online now: @HokiesMBB story on Alleyne and Ojiako entering portal, Keve Aluma @AlumaKeve talking to me about entering the draft and keeping his eligibility, and Mutts entering draft but keeping eligibility too https://t.co/s0PS4roJVK

Aluma’s abilities to pop and shoot from distance are key features of his game, especially as he projects out to the next level. However, Young featured Aluma (58.4 2P% this season) as a post-up target, too. According to Synergy Sports, Aluma scored 1.0 points per post-up possession this season (51.3 FG%), a Top 25 number nationally and No. 2 among ACC players with 100+ possessions. (Clemson’s PJ Hall led with 1.07 PPP.)

This dude’s hook shot is absolutely butter. Look at that touch as Aluma quick-spins and lofts this shot over Osun Osunniyi of St. Bonaventure, one of the top shot-blockers in the country. (Of course, Mutts makes the entry pass and cuts through, too.)

From the post, though, Aluma could also work as a hub of offense and a distributor. Aluma and Mutts had instant chemistry in post-to-post pass situations.

Aluma posted an assist rate of 14.7 percent during his time with Virginia Tech; that’s a massive jump from a 6.1 percent assist rate over two seasons with Wofford. If an opponent looked to double Aluma in the paint with another post defender, it was an auto-read: find Mutts.

However, even when opponents guarded Aluma 1-on-1 in the post, the dynamic duo of Mutts and Aluma could still make magic happen in tight spaces. As those guys played more and more basketball together, the chemistry grew, and the reads became more clever.

Mutts, especially, is a daring passer, one that maps the floor and is keenly aware of Aluma’s location, along with Virginia Tech’s collection of 3-point bombers.

It really isn’t much of a surprise that Aluma shot just 76 percent on basket cuts this season, per Synergy. Move without the ball; screen and cut. Pass and cut. Look to score.

Virginia Tech’s offense can shape-shift in a number of ways. During the 2021-22 season, the Hokies continued to invert action and play through Mutts, who led the team with an assist rate of 22.5 percent.

Passing is certainly a key component of Mutts’ game; however, the veteran forward does so many other things to drive winning.

What Mutts does best, though, comes of the defensive side of the floor. Simply put: he’s one of the best defenders in the country — an elite team defender, capable of creating events (blocks and steals) and guarding all five positions.

Mutts can switch out in a variety of contexts, too. He can switch vs. high ball screens, off-ball actions and even scramble switch on the back side of the defense. At 6-foot-7, 230 pounds, Mutts has the size and skill to check all of the boxes.

Aluma and Mutts offer a lot of scheme versatility, too, given their abilities as switch defenders. This is a gorgeous, seamless effort from the ACC Tournament, bottling up the electric Blake Wesley.

This possession vs. Virginia occurs in a late-clock situation: Armaan Franklin really only has time to catch-and-shoot as he curls the staggered screens. Mutts reads the action and — knowing the game situation — switches out and blocks the 3-point attempt of a 6-foot-4 shooter. (Note: That’s not easy!)

Mutts is always present and impactful on defense. This stuff may not seem super exciting, but Mutts is an eager help defender; he doesn’t miss his spots or rotations.

When it comes to help-and-recover on defense, Mutts is a master. It’s a shame, and a miss from voters, that he wasn’t named All-ACC Defensive Team this season.

When opponents look to post Aluma up, Mutts will aggressively dig down and look for steals.

Moreover, Mutts can go outside of Virginia Tech’s defensive scheme to make plays, too. The veteran forward sees the game and processes information instantaneously. Combine that with his length and athleticism: Mutts covers a lot of ground on defense.

It’s a joy to watch him work on that side of the floor the last two seasons — partly because he plays the game with great verve and energy.

No one will out-work or out-hustle Mutts; he will run down every loose ball, contest every shot at the rim and look to make a play, even when the outlook seems slim.

Similar to Aluma, Mutts appeared in all 58 games over the last two seasons (57 starts). Unsurprisingly, those two played heavy minutes together, too, while leading two teams to the NCAA Tournament.

According to Pivot Analysis, Mutts and Aluma played 1,349 minutes together the last two seasons. Virginia Tech was +241 in those minutes. In both seasons, the Hokies posted a net rating above +10.0 points per 100 possessions with Mutts and Aluma on the floor together.

So far, Aluma played 1,783 minutes at Virginia Tech. This means nearly 76 percent of Aluma’s total minutes as a Hokies occurred with Mutts on the floor as well. Over two seasons in Blacksburg, Mutts played 1,727 minutes: 78.1 percent of his total minutes came with Aluma on the court, too.