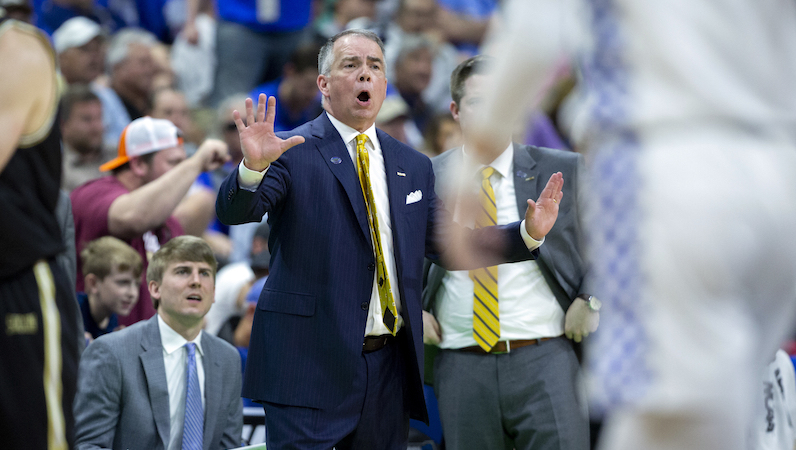 Wofford head coach Mike Young coaches his team from the beach against Kentucky during the first half of the second round men's college basketball game in the NCAA Tournament, in Jacksonville, Fla. Saturday, March 23, 2019. (AP Photo/Stephen B. Morton)

Unlike UCLA, Virginia Tech moved quickly. Less than a week after Buzz Williams left for Texas A&M, Tech plans to hire Mike Young away from Wofford. It looks as though Jeff Goodman was the first to report the news, which was later confirmed by veteran scribe David Teel.

Young was born in Radford, Virginia; he played college basketball nearby at Emory and Henry. For the last three decades, Young has dedicated his coaching life to Wofford Basketball. Young started as an assistant coach there in 1989. In 2002, he was named head coach.

The 2018-19 season ended in the Round of 32 for Wofford; after a first round win over Seton Hall, the Terriers nearly pulled off an upset against Kentucky — playing without PJ Washington. According to KenPom, Wofford ranks 10th nationally in adjusted offensive efficiency and fifth in effective shooting (57.5 eFG%). Sporting News named Young its Coach of the Year, too.