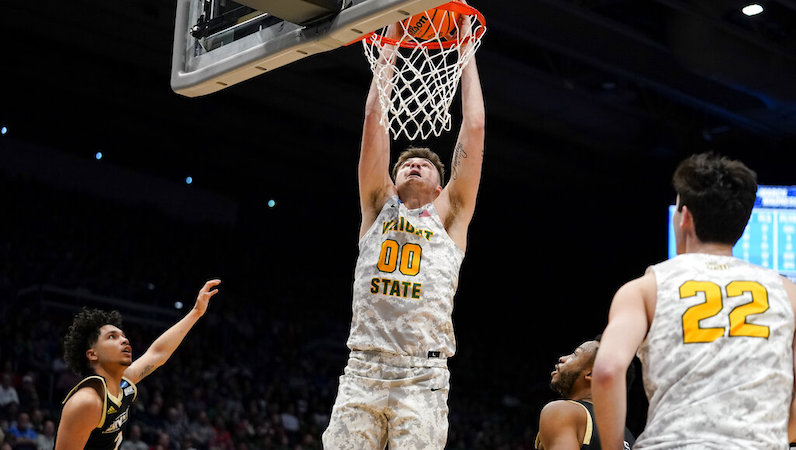 During his four years with Wright State, Basile appeared in 95 games, making 56 starts. For his career, Basile shot 58.6 percent on his 2-point attempts, including 64.1 percent at the rim this season (14 dunks).

Excited to announce my commitment to Virginia Tech 🔶🦃🔶 @HokiesMBB pic.twitter.com/txH0ECCywJ

Basile played well in some big games this season for the Raiders. When Wright State upset NC State last December, Basile pumped in 23 points, pulled down 14 rebounds and dished out four assists.

After winning the Horizon League, Wright State played Bryant in the First Four — up in Dayton. Basile struggled at times, but he still scored 14 points and blocked three shots. Wright State advanced to the field of 68. Arizona cruised to a win over Wright State, but Basile still had 21 points and drained three 3-pointers.

This decision comes when Virginia Tech needed it most. After claiming the ACC title in 2022, the Hokies will experience some turnover. Veteran wing Nahiem Alleyne will transfer to  UConn. Keve Aluma, who played well at the 2022 PIT, plans to keep his name in the 2022 NBA Draft. Justyn Mutts is currently testing the draft process, too, although he’s left the door open for a return.

Regardless of what Mutts decides, this is the end of the Aluma-Mutts frontcourt, one of the top frontcourt duos in college basketball.

Mike Young projects to have an explosive perimeter trio next season — despite the departures of point guard Storm Murphy and Alleyne: Hunter Cattoor, Sean Pedulla and Darius Maddox.

Cattoor is one of the top shooters (41.7 3P%) in the country. He’s elite shooting off of movement, armed with a quick release and excellent screen usage. Here’s Cattoor draining a 3 off Veer Pindown action from a sideline out-of-bounds play call.

Pedulla looks ready for a breakout sophomore season; he played very well during the second half of his freshman campaign. Over the final 16 games of the season, Pedulla averaged 8.4 points (40.0 3P%, 93.8 FT%) in only 16.5 minutes per contest.

All season long, Maddox was one of the sneaky-good offensive players in the ACC. The sophomore wing didn’t have eye-popping per-game numbers; however, on a per-possession basis, he was outstanding.

Should be in the conversation for ACC 6MOY

Maddox shot 50.6 from beyond the arc (63.8 eFG%) and averaged 23.7 points per 100 possessions (8.1 3PA). From this possession vs. North Carolina: Virginia Tech — with some misdirection — flows from Horns into ring-around-the-rose staggered pindowns for Maddox.

That trio will also be joined by incoming freshman Rodney Rice, 6-foot-4 combo guard from DeMatha Catholic and a Top 60 prospect in the 2022 class.

However, for all of this to work, the Hokies need some potency up front. This is where Basile can really help Virginia Tech. It’s not just scoring, although that’s critical: Basile’s passing skills should prove helpful, too.