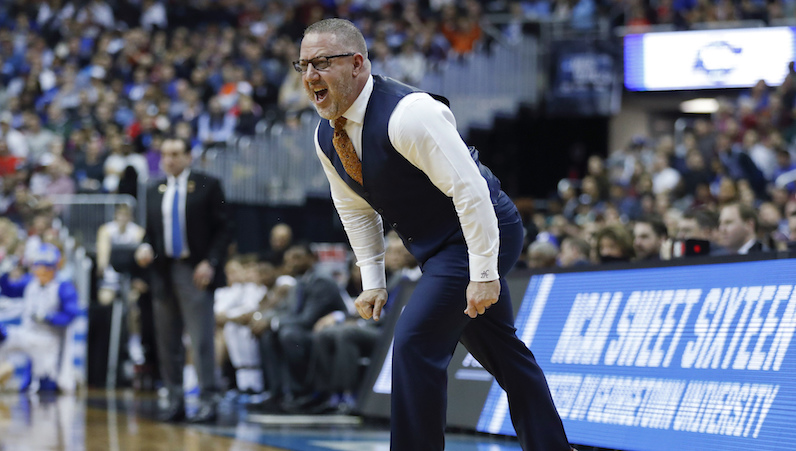 Virginia Tech head coach Buzz Williams yells across the court to his players during the first half of an NCAA men's East Regional semifinal college basketball game against Duke in Washington, Friday, March 29, 2019. (AP Photo/Patrick Semansky)

Nearly three weeks after the initial report surfaced, it’s official: after five seasons at Virginia Tech, Buzz Williams is headed to Texas A&M. During his time in Blacksburg, the Hokies enjoyed some of the finest moments in program history, including a recent run to the 2019 Sweet 16.

Source confirms @JonRothstein’s report: Texas A&M is planning to introduce Buzz Williams as its next coach on Thursday. I’m told the players have been notified and the target is a 4 p.m. CT presser. https://t.co/AICKHACCYC

Over the last few days, rumor swirled in both directions regarding Williams, Virginia Tech and Texas A&M; however, what long seemed to be the case has finally come to fruition. Williams will replace Billy Kennedy after eight seasons at Texas A&M.

Amid reports of his imminent departure for Texas A&M, #Hokies coach Buzz Williams meeting w/AD Whit Babcock this morning. Two have had open lines of communication.

Before his arrival at Virginia Tech, Williams ran Marquette for six seasons (139 wins); with the Golden Eagles, he made five NCAA Tournaments. During his time there, he also helped put multiple players in the NBA, like Wes Matthews and Jimmy Butler.

Similar to his time at Marquette, Williams build a program that had an identity, too. The Hokies spread the floor and blitzed opponents with a roster of 3-point gunners. According to KenPom, Virginia Tech ranked 10th nationally in adjusted offensive efficiency this season.

In 2019, the Hokies made just the second Sweet 16 in program history and won 26 games. It was fine coaching job by Williams, who helped rework Tech’s offense on the fly after the midseason injury to Justin Robinson.

With Nickeil Alexander-Walker, Virginia Tech is set up to have its first round NBA Draft pick since Dell Curry in 1986.

Speaking of NAW, it’s interesting to take a look at Tech’s roster. Justin Robinson, Ahmed Hill and Ty Outlaw are seniors and done with college basketball; Alexander-Walker is projected to go in the first round of the draft as a top-20 prospect. Who knows what will happen with redshirt junior center Kerry Blackshear Jr.? Essentially, the roster in Blacksburg is set to turnover.

Virginia Tech plays through the middle with Nickeil Alexander-Walker and Kerry Blackshear Jr.

Despite concerns, Justin Fuente will return to Virginia Tech for 2021 season