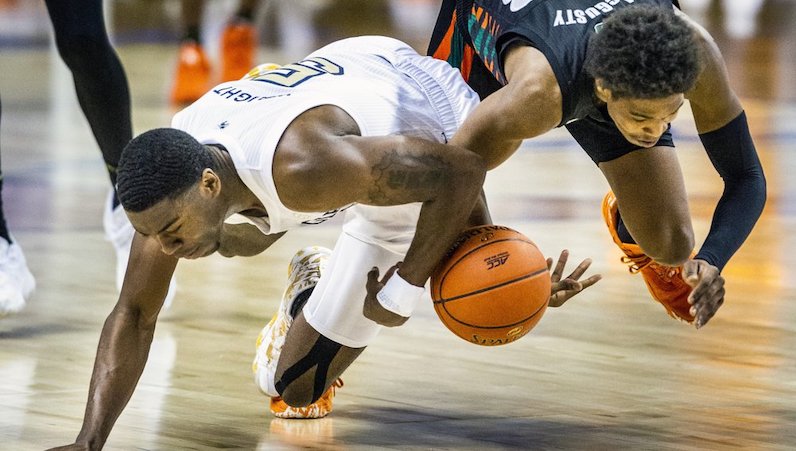 Georgia Tech's Moses Wright, left, and Miami's Kam McGusty scramble for a loose ball during an NCAA college basketball game in the quarterfinal round of the Atlantic Coast Conference tournament in Greensboro, N.C., Thursday, March 11, 2021. (Woody Marshall/News & Record via AP)

When Florida State and Georgia Tech met for the second time this season, the Yellow Jackets were victorious. Back on Jan. 30 in the ATL, Georgia Tech upset FSU 76-65. This remains the best victory on Georgia Tech’s resume.

Now, after splitting the season series, the two teams will have a rubber match to decide who gets to claim the ACC crown. (Florida State won the first matchup by 13 points in Tallahassee, back on Dec. 15.)

While Georgia Tech is often credited for its ability to shift defensively (shuffling from man to 1-3-1 zone and back), the Yellow Jackets can alter their half-court offense as well. So much of what Georgia Tech does offensively flows through Wright at the elbow.

This is one of the reasons why I would’ve voted Wright as the league’s Most Improved Player. Wright was given more than just added playing time and usage; Georgia Tech completely altered his role.

The Yellow Jackets test opposing off-ball defenders with high post sets like Chin and Point Series. Once Wright receives the ball, Alvarado, Devoe and Jordan Usher (23 dunks) start whirring around the floor. Defenses must be ready for split action and backdoor cuts.

According to Synergy Sports, half-court cuts account for 11.5 percent of Georgia Tech’s possessions this season. Georgia Tech was the only team in the ACC this season to average 10+ points per game off cuts. The Yellow Jackets rank 20th nationally in cut points per game: 10.3. (62.2 FG% on cuts)

During the win over FSU, though, Georgia Tech ditched the high-post passing for long stretches in the second half. Instead, the Yellow Jackets went to their Horns Twist action.

The action is simple and it’s a great way to get a desirable matchup for a lead ball handler. It’s a good way to force a switch, and then play off that matchup. Of course, FSU wants to switch on as many exchanges as possible, although they were slightly hesitant to place their centers on Alvarado, at times.

Alvarado has an effective shooting rate of 49 percent on off-dribble jumpers this season, which is pretty damn good.

The veteran point guard wouldn’t just settle for pull-up 3-pointers, though. Despite his stature, Alvarado was unafraid to attack the paint vs. Florida State’s size. Alvarado went 3-of-6 on FGA at the rim in the win over Florida State.

Pastner adds small wrinkles to these Horns Twist looks. On some of these looks, he’ll place one of his two star guards — Alvarado or Devoe — at the elbow, across from Wright. This guard will set the first screen and roll down to the paint — as Wright goes to set his screen. The action, however, isn’t done here.

The guard that rolls down to the paint will get involved in what’s called roll-replace action. As Wright (1.55 points per possession on basket rolls and slips) screens and rolls, the guard gift lifts back up in the direction of the ball handler — essentially replacing the space Wright just left.

With these principles working together, Georgia Tech is able to incorporate its three star players in the same action. This is certainly one way to maximize the talent on the floor.

According to Pivot Analysis, Wright played 679 of his 846 minutes this season (80 percent) with Alvarado and Devoe on the floor as well. Georgia Tech is +116 with those three on the floor together. (Net rating of +10.5 points per 100 possessions)

On other possessions, Alvarado moves around. Tech will place Alvarado in the corners — on the back side of the Twist/roll-replace action. Back in January, this allowed Alvarado to play into space behind Florida State’s deny/pressure defense.

The Yellow Jackets don’t have a lot of secondary shooting, either. Alvarado is Tech’s top spot-up shooter (59.7 eFG%). When Alvarado’s in the corner on these looks, it helps space the floor and provide necessary width to the action.

On some possessions, though, Florida State did what it does best: fly around, switch and make offenses play late into the shot clock. Florida State has a hyper-aggressive defensive profile; Leonard Hamilton wants to guard every inch of the floor and create turnovers.

However, the switching approach also negates what a lot of offenses want to do in the half court. Switching takes away the instant advantage that a screen normally provides. There are no rotations; the defense can keep everything in front. Opponents average 17.8 seconds per possessions vs. Florida State’s defense — No. 278 in average possession length. (During the 2019-20 season, FSU opponents averaged 17.9 seconds per offensive possession.)

Switch-heavy defenses aren’t impenetrable, though. There are vulnerabilities, including slip screens. It’s convenient, though, when an offense has game-breakers — guys that can make a play against any matchup, late in the clock.

(Georgia Tech ran Horns Twist in plenty of other games this season, including matchups vs. Kentucky and Virginia.)

Florida State’s switch defense is one of the best in the ACC at forcing opponents to scored unassisted. Less than 49 percent of opponent field goals were assisted during conference play this season.

However, when Georgia Tech defeated Florida State, the Yellow Jackets assisted on 19 of their 25 field goals. That’s an assist rate of 76 percent.

When GT lost at FSU in December, the Jackets assisted on only 50 percent of their field goals and scored just 0.95 points per possession.

Georgia Tech has four games this season with assists over 70 percent; the Yellow Jackets won all of these games. That includes a Feb. 27 win over Syracuse when Georgia Tech assisted on 78.8 percent of its field goals, a season high.

For the season, Georgia Tech ranks 35th nationally with an assist rate of 58.2 percent.