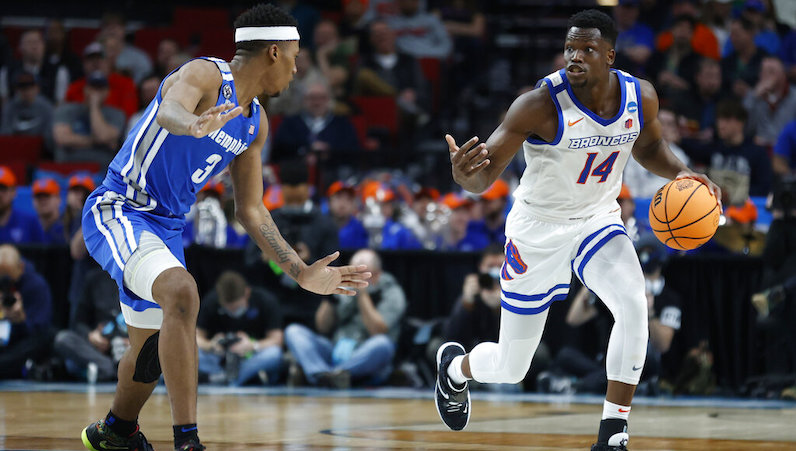 It’s been an eventful offseason for NC State basketball; however, head coach Kevin Keatts may not be done just yet with his roster. According to a report from Pack Pride, talks between Emmanuel Akot, a transfer from Boise State, and NC State have gathered steam.

Akot, a 6-foot-8 forward, has also been in contact with Memphis, Western Kentucky and Mississippi State. Wherever he plays, the 2022-23 season with be Akot’s sixth in college basketball. Initially, Akot started his career with Arizona; he was a 5-star recruit and a Top 25 prospect in the 2017 class, per 247 Sports. He was a part of the same recruiting class that brought Deandre Ayton to Arizona, too.

(Back in the 2017-18 season, NC State defeated Arizona, 90-84 in the Bahamas, the first big victory for Keatts with the Wolfpack. Akot actually played four minutes in that game, recording one rebound and one block.)

After two seasons with Arizona (48 games), Akot transferred to Boise State. He took a redshirt in the 2019-20 season, then played the following two with the Broncos: 81 3-pointers in 53 games.

According to Stadium’s Jeff Goodman, Akot will visit NC State later this week, too.

Those are Akot’s top 3 schools.

With the departure of Dereon Seabron, NC State has another scholarship to play with for the 2022-23 season. As Cory Smith notes at Pack Pride, the situation is fluid, but interest in Akot picked up after he withdrew for the 2022 NBA Draft.

The biggest offseason development for NC State, obviously, was the return of Terquavion Smith, a projected first round pick who withdrew from the NBA Draft. Smith will be one of the prospects in the entire country next season. However, the Wolfpack have been busy in the transfer portal, too.

The Fit: Emmanuel Akot in Raleigh?

As a hybrid wing/forward, Akot would provide NC State with another switch defender; he averaged 1.0 steals and 0.6 blocks per 40 minutes over two seasons with Boise State. More importantly, though, Akot would provide spot-up shooting, which would pair well with Smith. In a sense, Akot would help replace the fit and production of Jericole Hellems — a hybrid, face-up 4 who shot 39.0 percent from deep this season.

NC State will no longer have the downhill drive game of Seabron to play off of next season. Seabron’s rim pressure and ability to play slash-and-kick basketball opened up a lot of open jumpers for Smith and Hellems.

All 7 of Dereon Seabron's assists vs. FSU resulted in 3-pointers, including 5 from Terquavion Smith, who hit 7 3s in the game

It’s logical to assume that Smith, who has some of the best handles in the country, will take on greater offensive equity as a playmaker for NC State. Smith can really score and create advantage with his handle; he also plays with good vision. Smith can read the floor and make stuff happen — even when defenses are able to roll coverages in his direction.

However, Smith will need to show that he can reliably create shots for his teammates. Can he scale up his on-ball usage and creation efforts, while maintaining his overall scoring efficiency?

Terquavion Smith's pick-and-roll passing/decision-making has been good — mostly just taking what the defense gives with the defender at the level + back-side rotations not crisp, but this time Trevion Williams drops and Terq is able to engage the drop, then hit Kofi on the roll pic.twitter.com/zl3x2Fy802

To help guide that development, and add to the offense’s overall balance, it’ll behoove NC State to space the floor properly with as many shooters as possible. The spread pick-and-roll attack hits differently when the kick-out looks are there.

Well, Akot can definitely shoot. In fact, his numbers suggest that he’s primarily a catch-and-shoot target. During his two seasons with Boise State, 48 percent of Akot’s total field goal attempts were of the 3-point variety. According to Synergy Sports, Akot scored 1.11 points per spot-up possession this season (59.3 eFG%), which ranked No. 5 in the Mountain West Conference (100+ possessions).

When Smith looks to drive downhill, the more room he has, the better, obviously. Spot-up threats like Akot occupy help defenders, opening lanes to the basket. When the help arrives on drives, Smith can simply look to kick the ball out for open 3s.

If the defense works hard to rotate and closeout, then those closeouts and rotations must cover more ground vs. a good shooter. When long closeouts occur, spot-up players will also have the advantage to drive the ball off the catch, thus building off whatever advantage Smith’s previously created.