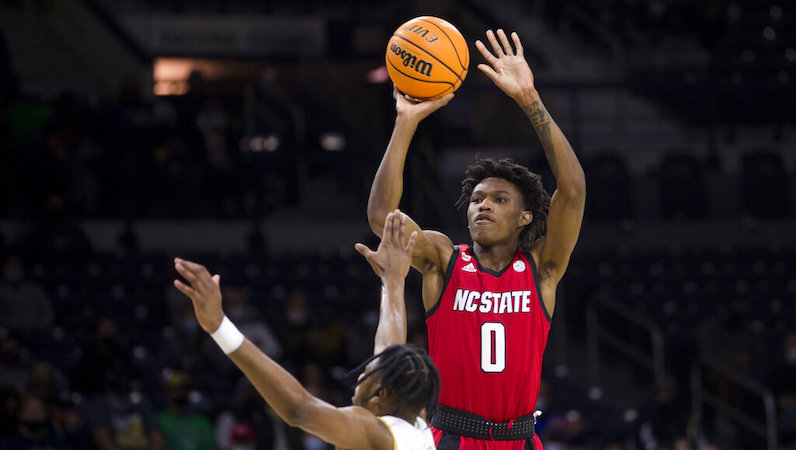 Terquavion Smith will be back in Raleigh for his sophomore season. After a strong showing at the 2022 Combine, Smith will withdraw from the NBA Draft and return to NC State.

Jonathan Givony from ESPN broke the news regarding Smith.

Terquavion Smith, a projected first round pick, is withdrawing from the NBA draft and returning to NC State for his sophomore season, he told ESPN. "I want one more season to just be a college student." Story: https://t.co/GidaCy5Qh1

During his freshman season, Smith exploded on the scene and continued to improve as the year went along. Smith averaged 16.3 points (28.1 percent usage rate), 4.1 rebounds and 2.1 assists per game, while shooting 36.9 percent from beyond the arc.

Overall, Smith drained 96 3-pointers, which shattered the NC State freshman record. Those 96 3-pointers are good for the third most in single-season history with NC State, behind only Scott Wood and Rodney Monroe.

When it comes to Smith’s long-range proficiency, the numbers really require some context. Smith feasted as a spot-up bomber around the slash-and-kick excellence of Dereon Seabron. According to Synergy Sports, Smith finished the season scoring 1.2 points per spot-up possessions, one of the best high-volume numbers in the ACC.

Per CBB Analytics: Over 36% of Seabron's assists have gone to Terquavion Smith (26), turning into one of the best slash-and-kick combos in the country

However, Smith showcased some of the best deep shooting range in college basketball this past season. Smith can catch-and-shoot from well beyond the arc, lifting and firing with the same feathery stroke.

Moreover, Smith can create his own 3-point shot, too: 26 percent of his 3-point makes (25 of 96 3PM) came unassisted this season. If an opposing defender gave Smith any air space, he would happily let it fly from deep.

If an opposing defender switched out on Smith, he could look to attack off the bounce or get to his space-creation, step-back game. Smith has absolutely nasty handles — with the ability to create advantage and challenge any defender 1-on-1.

According to Synergy Sports, Smith scored 1.05 points per isolation possession as a freshman.

A few weeks after the season, Smith declared for the 2022 NBA Draft, while maintaining his eligibility for a return to college. During the pre-draft process, Smith worked with agent Todd Ramasar as his stock rose, quickly.

Smith, ESPN’s No. 22 prospect for the 2022 NBA Draft, performed well two weeks ago at the combine in Chicago. He tested well during the drills portion of the event. Later on, Smith dropped 17 points in the first scrimmage of the second day at the combine. Smith’s pick-and-roll passing popped in that game, too.

Terquavion Smith's pick-and-roll passing/decision-making has been good — mostly just taking what the defense gives with the defender at the level + back-side rotations not crisp, but this time Trevion Williams drops and Terq is able to engage the drop, then hit Kofi on the roll pic.twitter.com/zl3x2Fy802

After that performance, Smith withdrew from the remainder of the event. It seemed as though Smith showed scouts exactly what they hoped; a return to NC State appeared more unlikely than ever before. Smith, however, looked at the situation differently, regardless of his strong performance.

Smith explained via text to ESPN that he was happy to receive positive feedback; however, he wants another year to be in college and work on his craft.

I have to be honest and admit money has never been at the center of my thoughts. My agent explained to me that teams as high as the late teens, through the rest of the first round, all have me ranked as a first-round talent. It’s exciting to hear that. But I told him I have more work to do. I like school and my college in particular. Remember, my last two years have been so strange, thanks to the pandemic. I just want one more season to get everything right and just be a college student.

The return of Smith is massive in many directions. First, Smith will be one of the best players in the ACC and in the country next season. Smith has the opportunity to do what guys like Jaden Ivey, Johnny Davis, Keegan Murray and Bennedict Mathurin did this year — vaulting from potential first-round talents to lottery picks after their sophomore seasons.

Essentially, there’s a blueprint for Kevin Keatts to show Smith: return for one more year, develop and turn into a lottery pick. Smith will have even more time on the basketball next season as he teams up in the backcourt with Jarkel Joiner, Breon Pass and Casey Morsell. After a season of struggles for NC State, this is some of the best news Keatts has received in many months.

Following a solid offseason of additions within the transfer portal, including do-it-all La Salle wing Jack Clark, NC State now has its offensive centerpiece for the 2022-23 season. Get ready for plenty of pick-and-roll action with Terquavion Smith.

Smith told ESPN this decision wasn’t about money — in either direction. That’s cool. More importantly, though, Smith will be able to make good money while still in college via NIL. Smith is one of the biggest names in the sport, playing in a major college hoops media market and in a power conference. He’ll do rather well for himself while honing his craft.