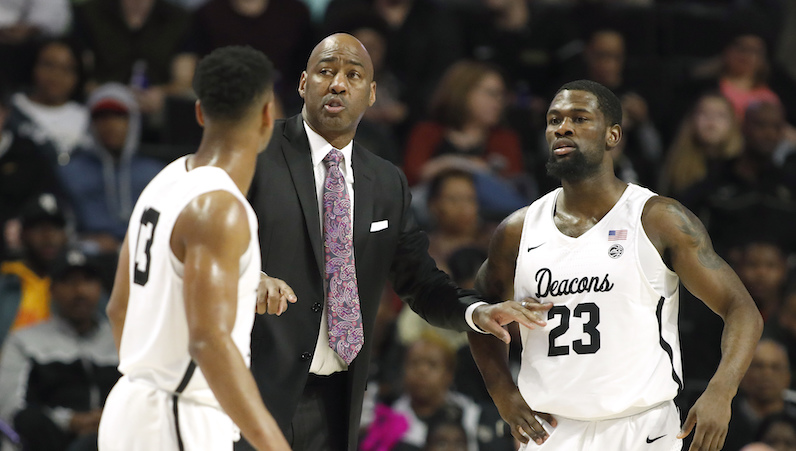 Wake Forest is once again in the market for a new head basketball coach. On Saturday, the university parted ways with Danny Manning, after six mostly unremarkable seasons. This move is the first major personnel decision from director of athletics John Currie.

ACCSports.com reported in early March that negotiations between Manning’s agent and the university had started on a potential buyout. However, in the weeks that followed the loss in Greensboro, things seemed to change as college sports dealt with the COVID-19 pandemic. The paradigm shifted between the loss on Tuesday and what happened in Oklahoma City with Rudy Gobert, when the All-Star center tested positive for coronavirus.

Wake Forest’s public messaging remained fairly limited; most of of major college athletics seemed paralyzed on coaching decisions. Manning and his staff continued to recruit players to the program, including Houston Baptist graduate transfer Ian DuBose and Isaiah Wilkins from Virginia Tech. Manning spoke with the media and, on multiple occasions, indicted a belief that he’d return to Wake Forest next season.

That is not the case, though: the Demon Deacons will move on from Manning.

Wake Forest posted just one winning season with Manning as coach; powered by John Collins, the 2016-17 team went 19-14 (9-9 ACC). That season marks the only time the Demon Deacons went to the NCAA Tournament with Manning. It’s also the only season since the 2009-10 campaign under Dino Gaudio that Wake Forest didn’t post a losing record in conference play. The program has been on uneven ground since the untimely death of Skip Prosser in the summer of 2007.

Overall, Manning finished with a record of 30-80 (.273) in regular season ACC competition.

This takes things back to a larger point, though — one that exceeds Manning’s time with the university. Wake Forest is going on a decade-plus of near irrelevancy; after years of struggle, the bottom fell out on attendance this season, too. Wake Forest averaged under 7,000 fans per game this season — at a venue that holds over 14,500. Fan apathy is at a high, to say the least.

Following the conclusion of the 2018-19 campaign, there was momentum to move on from Manning; however, there were serious financial concerns — millions of them, in fact. Manning’s buyout is large, and seen as cost-prohibitive. In early March, ACCSports.com reported that negotiations between Wake Forest and Manning’s agent had recently started.

Back in Nov. 2018, Jeff Goodman of Stadium reported that the buyout hovered around $18 million at the time, assumedly because the coach then had six years left on his deal, at an average of about $3 million per season. That same math would leave the current buyout number at $15 million, since “only” five years remain on the contract now. (Manning agreed to a contract extension in Nov. 2017, which signed him to the school through 2025.)

There were some good moments under Manning; it wasn’t all bad. After a seven-year gap, Manning helped lead Wake Forest back to the NCAA Tournament in 2017. (Of course, Wake Forest lost to Kansas State up in Dayton during First Four play. The Demon Deacons allowed 55 points in the second half.)

While the go-go offenses of Prosser and Gaudio came to a screeching halt under Jeff Bzdelik, Manning improved the program’s scoring output. On three different occasions, Wake Forest finished with a top-75 offense, in terms of adjusted efficiency, under Manning. The 2016-17 team finished the season No. 7 nationally in adjusted offensive efficiency, per KenPom. Even this year’s team, built around All-ACC big man Olivier Sarr, ranked 61st nationally.

In a limited sample, Collins, Sarr and Doral Moore represent another achievement of the Danny Manning era: post player development. All three of those bigs arrived in Winston-Salem as mostly unheralded or raw recruits — Collins and Sarr, especially. Manning deserves some credit for their ascents as players.

However, that’s nowhere near enough to offset the losing under Manning, much of which was punctuated by defensive struggles. Wake Forest never once ranked inside the top 125 nationally in adjusted defensive efficiency.

Wake Forest is a proud basketball program. Despite its rich tradition, Wake Forest has been mostly dormant for years now. The next hire will be tasked with not only winning in the ACC, but to also help reconstruct a program. As Manning’s time comes to a close, Currie and the Demon Deacons have their hands full.

Currently, Wake Forest has four players signed to its 2020 recruiting class, ranked No. 60 nationally. As of right now, one scholarship remains open for next season.

Veteran point guard Brandon Childress will leave the program after four seasons; junior wing Chaundee Brown plans to depart, too. All-ACC center Oliver Sarr has one season of eligibility remaining. If he decides to return, Wake Forest could build around the 7-footer next season. Most roster moves could be on the horizon. A lengthy rebuild process is likely on the horizon in Winston-Salem.