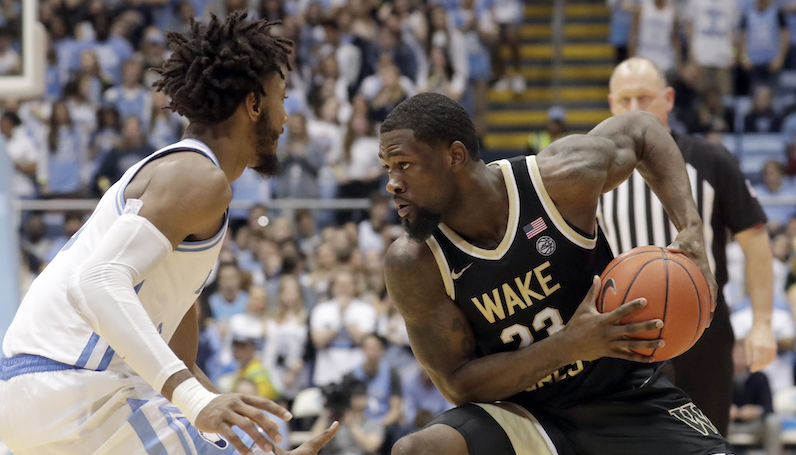 According to a report from Conor O’Neill at the Winston-Salem Journal, junior wing Chaundee Brown plans to go through the 2020 NBA Draft process. However, even if Brown decides to return to college basketball, it won’t be at Wake Forest. If Brown leaves the draft, he will enter the NCAA transfer portal and play elsewhere to conclude his college career.

Brown’s official decision will likely be made public later this week.

Chaundee Brown is entering the NBA draft process and if he returns to college, he plans to enter the transfer portal, per source: https://t.co/QCYkipuwrS

Initially a top-40 prospect in the 2017 class, Brown was a big get for Danny Manning and Wake Forest. He committed to the Demon Deacons over Kansas, UConn and Florida.

Brown never quite turned into a star, but he was a dependable two-way wing during his time in Winston-Salem. Brown appeared in 84 games (73 starts); as a junior this season, he averaged 12.1 points, 6.5 rebounds and 1.4 assists per game, all career highs.

Known for his midrange game on offense, Brown shot 44 percent on long 2-point attempt this season, which is solid. Brown scored 876 career points while in a Wake Forest uniform.

Team success, however, was never a part of the picture for Brown while at Wake Forest. Brown joined the program the season after Manning’s lone NCAA Tournament appearance with the Demon Deacons. Over his three years, Wake Forest slumped under Manning — going just 35-58 (.376). The Demon Deacons won a total of 14 ACC games in that stretch of time, too.

At this point, Brown isn’t much a of an NBA prospect. He has a good, strong body, and his prep pedigree is high. But that’s about it. Brown isn’t an explosive athlete; his stocks numbers are tiny (1.1 percent career steal rate), and he didn’t record a dunk this season, either.

Brown is a career 33 percent 3-point shooter, which is mostly fine for a college player. He’s a good free-throw shooter: 83.1 percent — a positive indicator. But at this point, his sell isn’t as a shooter.

Of course, there’s nothing to lose for Brown to at least go through the process — whatever that may look like amid coronavirus concerns. Manning, last week, indicated that he believed Brown and junior big man Olivier Sarr — an All-ACC talent — would at least test the draft waters.

As O’Neill notes, though, with Brown leaving — one way or the other — he will become the fifth junior over the last four seasons to depart before becoming a senior. That list includes several quality ACC players: Dinos Mitoglou, Doral Moore, Bryant Crawford and Keyshawn Woods.

At this point, it’s sort of amazing that Manning is still at Wake Forest, preparing for the 2020-21 season; this is all a part of the new reality as college sports work to deal with the negative impacts of the COVID-19 pandemic.

Wake Forest landed high-scoring grad transfer Ian DuBose two weeks ago; however, if Sarr follows Brown, and commits to leaving the program, the Demon Deacons are in for another set of struggles next season.

Manning: “For me, I’m moving forward as I’m going to be here”