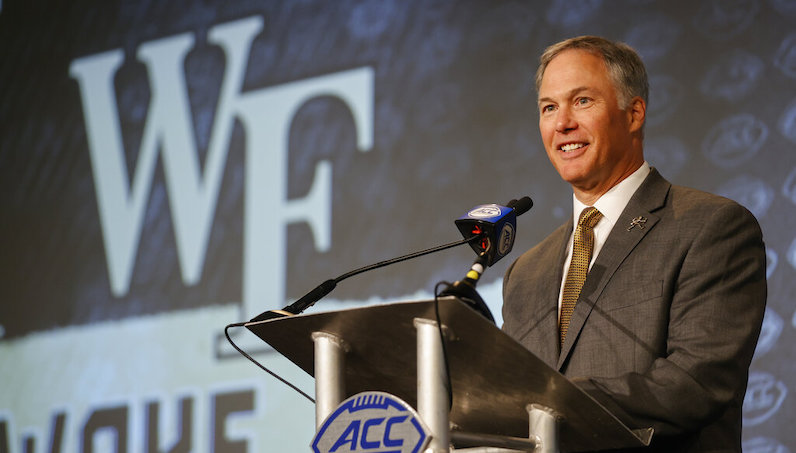 Dave Clawson is one of the most respected coaches in the ACC — regardless of sport. Wake Forest football achieved new heights during Clawson’s tenure; however, his approach goes beyond the field of play. Clawson has spoken critically of the direction and trend lines of college football — specific to expanding the College Football Playoff.

Now, Clawson took things a little further. While speaking with the media at the 2022 ACC Football Kickoff, Clawson griped about the lack of leadership in college football on a national level. Similar to what former Duke coach Mike Krzyzewski and ESPN’s Jay Bilas have proposed for college basketball, Clawson mentioned the need for a commissioner of the sport.

Backdropped by the realities of realignment in college sports, Clawson is stating the obvious here; it’s something that’s patently true across a variety of industries. Those in charge behave in their own self-interest, while focusing narrowly on short-term financial incentives. There are no new ideas outside of: grow exponentially and maximize profit.

Wake Forest coach Dave Clawson: “Right now we have a lack of leadership in college football.”

Once something like college football becomes this big — backed by billions of TV dollars — the die is pretty much cast, though. In theory, college football could have a commissioner, as Clawson suggests. However, in the end, the person will be subject to the same market forces currently dominating the sport and how it’s monetized.

Clawson’s suggestion is earnest and one that’s well intended, but these things run on auto-pilot. Those who have power and a stake in the game — conference commissioners, university presidents, TV executives — are just trying to ensure their own lot within the kingdom. It’s eat or be eaten.