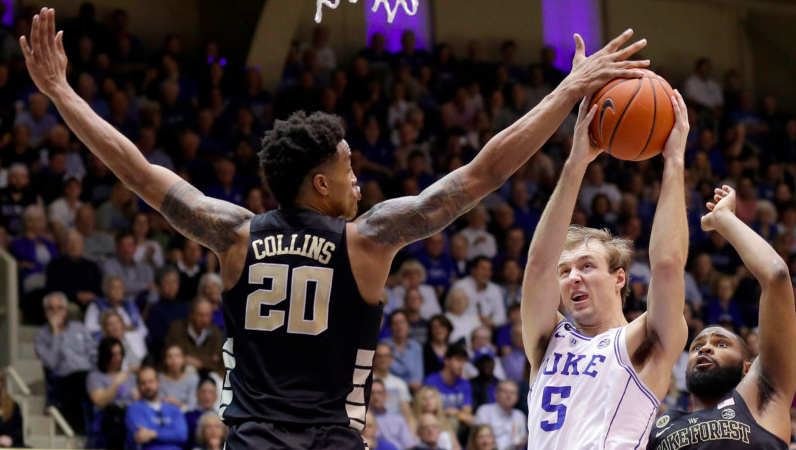 No matter the criteria, John Collins and Luke Kennard became two of the ACC's best as sophomores. (AP Photo)

Just over a week ago, ACCSports.com released its All-ACC rosters. Here are the analytics behind why I selected five of the conference’s best for my first-team All-ACC lineup.

The only player in the ACC to finish the regular season averaging north of 20 points per game, Luke Kennard put the finishing touches on a dazzling sophomore season. The hyper-efficient Kennard just missed out on landing in the prodigious 50/40/90 club: 50.5 field-goal percentage, 45 percent from three-point range and 84.7 free-throw percentage.

According to KenPom.com, Kennard posted an offensive rating of 1.3 points produced per possession, which ranks No. 22 in the nation; however, that only begins to paint a picture of his overall dominance on offense. Kennard grew into a dynamic off the ball force as a sophomore. Similar to how Klay Thompson bends and breaks defenses for the Golden State Warriors, Kennard is in constant motion, and all five opposing players must account for him at all times.

Let him catch with a clean look and it is over; according to Synergy Sports, there were 21 players in the ACC who recorded at least 100 catch-and-shoot possessions this season. Kennard, on 108 possession, shot 43.5 percent, which was the best number of that high-usage group.

Kennard does not just run in lines or curl off of screens; he knows how to leverage his gravity and properly time his patterns. Take for instance his game-winner against Wake Forest. At the start of this play, he leans like he will run off a Matt Jones pindown; instead of that, though, Kennard goes left and sets up poor Mitchell Wilbekin like he might screen for Harry Giles before running off a flex screen. This is ridiculously hard to defend — look how much separation Kennard creates.

Kennard is never in a rush, but invariably, he gets to his spots. He is an assassin from midrange, and opposing coaches wake up with cold sweats in the middle of the night panicking over him knifing off another dribble handoff with Amile Jefferson — an excellent partnership all season — taking two dribbles and drilling a 17-footer. According to Synergy, Kennard ranked No. 35 in the nation and was tops in the ACC in points per possession on handoffs: 1.31 on 52.1 percent shooting.

The lefty has some off-the-bounce juice to his game; Duke has turned to him down the stretch of big games to create, and he has delivered, but there simply is not a more dangerous player in America than Kennard when he does not have the ball in his hands. That is power.

Say hello to another sophomore, and my vote for ACC Player of the Year: Wake Forest’s John Collins. Wake Forest is headed to the NCAA tournament for the first time since 2010, and there is a lot of credit to go around. However, no one player is more worthy of acknowledgement than this dude.

While Collins was a monster all season, he had one six-week stretch where he was simply invincible. Starting in mid-January and ranging until early March, Collins scored 20-plus points in 12 straight games. Here are his averages over that stretch, which took up two-thirds of Wake’s conference schedule:

Good lord, that is savage. Collins, who ranks No. 7 in the nation in offensive rebounding rate (16.5 percent), erupted this year as a rim-running menace who could score in two dozen different ways around the hoop. As the roll man on pick-and-roll — where he usually teamed up with Bryant Crawford to work magic — Collins ranked No. 1 in the nation in offensive efficiency, per Synergy: 1.72 points per possession, 90.3 percent shooting. Anthony Davis and Karl-Anthony Towns are two of the best screen-rollers in the NBA, and these numbers Collins assembled shatter what the two former Wildcats did when they were at Kentucky.

Collins has been used most out of the post this season, and according to Synergy, he has done serious damage there: 221 possessions (No. 1 in the ACC), 52.2 percent shooting, 1.04 points per possession — tops in the league. It is rare to find an underclassman this skilled in the post.

Wake Forest runs a lot of side pick-and-rolls on the wings, and even when Collins does not receive a pass, he still wreaks havoc. Opponents have to bump down off the wing to stop his runs to the hoop, which frees up shooters around the perimeter; according to Sports-Reference, Wake ranked No. 45 in the nation in three-point percentage — 38.3 percent, an improvement of nearly seven percent over last season. Collins attempted just one three all season, but he is the key ingredient for a top-50 three-point offense.

It took three years, but as a junior, Justin Jackson became the high-voltage swingman many predicted he would become as a high school All-American. North Carolina has a legacy of producing game-breaking wings: Michael Jordan, Jerry Stackhouse, Vince Carter. Jackson threw his hat in the ring with those stalwarts this season.

Jackson upped his scoring by better than six points over last season and posted a career-high usage rate — 25.5 percent. He became a much more efficient player, too, primarily by evolving into a prolific long-range bomber. It is not just that Jackson shot 39 percent on three-pointers this season; he also shot way more of them. More than 47 percent of Jackson’s attempts from the field came from beyond the arc (221).

Similar to Kennard, part of Jackson’s evolution was an understanding of how to move sans the basketball. UNC played games with opposing defenses involving Jackson as a screener.

The increased volume of threes moved Jackson further away from the basket; his offensive rebounding numbers are down, but who cares when that is the opportunity cost for his evolution as a ball-dominant creator? Jackson scored 1.09 points per possession on isolations this season, according to Synergy — a top-five number in the ACC.

He was scary good running pick-and-rolls this season, too, which should have NBA scouts drooling. As the ball-handler in pick-and-rolls, Jackson shot a sizzling 38 percent; this opened up avenues for his teammates. Per Synergy, when Jackson was a passer out of this action, his teammates shot 59 percent.

After a freshman season that saw him come off the bench to inject unadulterated athleticism into Louisville’s lineup, Donovan Mitchell returned to school and became the ACC’s best lead guard.

The Baby Russell Westbrook comparisons are fun and a bit premature, but can you really blame us when he does things like this? That is not even the first time in his career that he has thrown Syracuse up on a poster.

When Quentin Snider went down with an injury, Mitchell went full supernova mode as Louisville’s only offensive creator. In those six games, Mitchell did not blink, and averaged 19.3 points and three assists per game while shooting 55.6 percent from the floor, 43.2 percent from beyond the arc and 94.7 percent on free throws. The Cardinals went 4-2 over this stretch; the only defeats came at the hands of nationally ranked Florida State and Virginia.

Mitchell’s playmaking and shot-making abilities have improved so much; it really is impressive to witness. He is still a little streaky shooting from deep, but it is tough to argue against a three-point shooting clip of 37.1 percent — an improvement of 12 percent from his freshman campaign. According to Synergy, Mitchell has connected on 49 of his 123 catch-and-shoot opportunities this season (39.8 percent). Last season, Mitchell shot just 27 percent on his catch-and-shoots.

Whenever Louisville needs a bucket, the plan is simple: run a pick-and-roll with Mitchell. It is not a bad idea. Mitchell shoots 41.7 percent as a ball-handler in pick-and-rolls and has the vision to create for others. If an opponent blocks off the roll man’s line to the hoop, Mitchell can whip it to the strong or weak side; his teammates have shot 45.2 percent on spot-up possessions, according to Synergy, when Mitchell is a passer in this type of action, which ranks No. 4 in the ACC.

There is not the space to go into it here, but Mitchell is also a dogged defender who causes havoc trapping full-court and checking dudes man-to-man. Per KenPom, he ranks 34th nationally in steal rate. Mitchell ends roughly four percent of opponents’ possession with a steal when he is on the floor.

Additionally, opponents have shot just 27.9 percent on spot-ups and 21.1 percent on pick-and-rolls defended by Mitchell, per Synergy. The Cardinals are No. 6 in the nation in defensive efficiency, and Mitchell is where that starts.

Last, but certainly not least: Notre Dame’s Bonzie Colson, the patron saint of the ACC Analytics page. After seeing him play up close at the 2015 ACC Tournament in Greensboro, I grew fond of his game; back then, he was a moderately used reserve, which is why it gives me great pleasure to slot him two years later on an all-conference team.

Notre Dame plays some of the most aesthetically pleasing offense you will find in college basketball. It is a joy to watch, and while the ball is predominantly in Matt Farrell’s hands, Colson is the axis on which the whole operation hinges.

The ball movement and skip passes alone are gorgeous, but Mike Brey’s four-around-one motion offense only works when there is someone in the middle who commands attention. Colson does not look the part of a rim-running magnet, but he is so darn effective inside. Colson has made 61.7 percent on his non-post-up attempts around the basket, per Synergy Sports. He even features a funky old-school game that mixes runners and floaters; T.J. Warren would be proud. Colson has scored 1.25 points per possession on runners this season, which ranks 22nd in the nation.

On post-ups, Colson has ripped nets to the tune of 48.7 percent shooting. He is a willing and able passer, too. Per Synergy, Colson’s teammates shoot 54.2 percent on attempts when he passes out of the post. Cutters have been especially grateful: 85.7 field-goal percentage when Colson hits them with passes from post-ups.

I thought Colson would look to stretch the floor more this season; the junior big has not hoisted a large volume of attempts from deep, but he shot 39.6 percent on a respectable 1.5 three-point attempts per game. This is the next phase for Colson; if he adds this as a senior, there will be no answer for The Bonz.