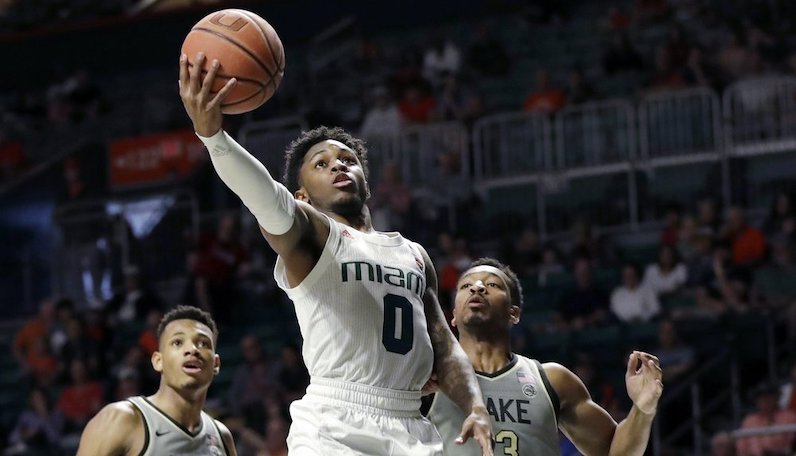 Miami guard Chris Lykes (0) goes up for a shot against Wake Forest forward Ody Oguama (33) and guard Andrien White (13) during the first half of an NCAA college basketball game in Coral Gables, Fla., in this Saturday, Feb. 15, 2020, file photo. Dynamic Miami Hurricanes point guard Chris Lykes is back at practice and may be back in action for the first time in two months Saturday, Feb. 6, 2021, against No. 16 Virginia Tech. (AP Photo/Wilfredo Lee)

Chris Lykes has put an end to his brilliant career at Miami. The 5-foot-7 point guard won’t return for the 2021-22 season; Lykes will go pro.

A couple of quick personnel notes for @CanesHoops: Jim Larrañaga announces that Chris Lykes is planning to turn pro, while Sam Waardenburg is set to return next season.

Waardenburg announced yesterday he planned to return to Miami.

A prep start out of Washington D.C., Lykes entered Miami in 2017; he was a part of the same recruiting class that included future lottery pick Lonnie Walker, now with the San Antonio Spurs. Lykes picked Miami over offers from Dayton, Villanova and Georgetown.

The 2017-18 Hurricanes were a talented bunch — with Lykes is a super-sub role off the bench. Led by Bruce Brown (now with the Brooklyn Nets), Walker and Dewan Hernandez, Miami won 22 games and was a 6-seed in the 2018 NCAA Tournament. Of course, Miami was upset by Porter Moser and Loyola-Chicago in the first round as the legend of Sister Jean took off.

Over the next three seasons, however, nothing quite worked for Jim Larranaga and the Hurricanes. Some of which was out of their control. A barrage of NCAA troubles, federal investigations/charges and injuries derailed what was one of the ACC’s most reliable programs.

During the 2018-19 and 2019-20 seasons, Lykes pushed depleted Miami rosters to the finish line. While Miami went just 12-26 in ACC games during this stretch, Lykes evolved into one of the premier high-usage pick-and-roll guards in the country.

Lykes posted a usage rate above 25 percent every season while at Miami; however, his junior season was his masterpiece. Before injuries cost him game time, Lykes had his best season shooting the ball: 38.1 3P%, 81.4 FT%.

One year ago, it seemed as though the 2020-21 season would provide Miami an opportunity to smash the proverbial reset button.

A talented 2020 class arrived to town, along with the now-eligible Nysier Brooks, who transferred in from Cincinnati in 2019.

Isaiah Wong closed his freshman season (2019-20) in fine fashion. With Wong, Lykes and Kam McGusty in the backcourt — along with defensive specialist Harlond Beverly — Miami had the makings of a group of guards. Finally, Larranaga had the talent to revamp his spread pick-and-roll offense, it seemed.

Injuries, once again, derailed things, though. After suffering an ankle injury in early December, Lykes missed the remainder of the season. Miami finished 10-17 (4-15 ACC), the worst mark ever under Larranaga.

System of a down

After three straight losing seasons, Miami basketball is headed for an unwieldy 2021. While the Hurricanes got a commitment from veteran stretch-4 Sam Waardenburg, who will return for his fifth season, the roster will go through a great deal of turnover.

Last week, Earl Timberlake — the prize of Miami’s 2020 recruiting class — exited Miami, too. Timberlake is one of the top transfers in the 2021 offseason.

Elijah Olaniyi, who transferred to Miami last May (after three seasons with Stony Brook), will head back to the transfer portal as well.

Things now turn over to Wong, the team’s All-ACC guard, and McGusty, another veteran shot creator. The same can be said for Beverly and versatile sophomore forward Anthony Walker.

Jim Larranaga is “very, very confident” Anthony Walker and Harlond Beverly will return and “very confident” Isaiah Wong will fill out paperwork for NBA Draft to see where he projects, but no decision yet.

Wong will consider his NBA options (he’s a real prospect), while McGusty could look to play for his third program, after five combined seasons with Oklahoma and Miami.