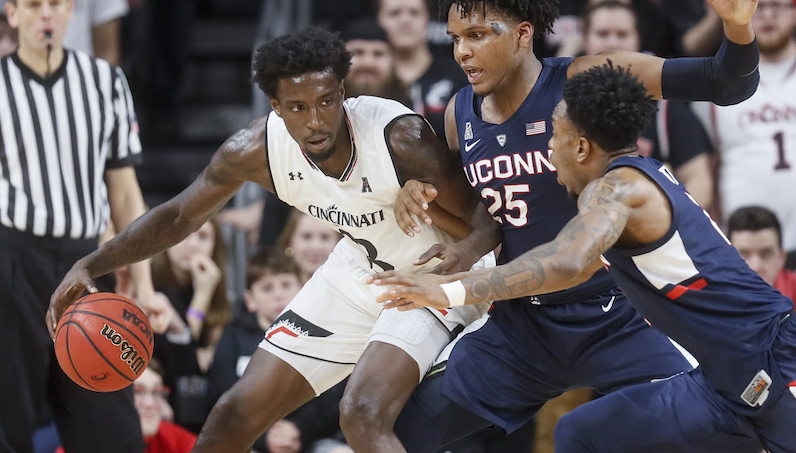 Earlier this week, Miami Basketball landed one of the most notable transfers of the 2019 offseason. Jim Larranaga and the Canes added Cincinnati big man Nysier Brooks. After three seasons at Cincinnati, the former 3-star recruit decided to leave the program after Mick Cronin’s departure to UCLA.

As of right now, Brooks has one season of eligibility left and will have to redshirt during the 2019-20; however, that could change with a waiver from the NCAA.

The 6-foot-11 Brooks add serious size, obviously, and experience — over 100 games and 1,400 career minutes — to Miami’s frontcourt. During his time at Cincinnati, Brooks played with some really good athletes, too. Gary Clark and Jacob Evans are both in the NBA; in fact, those two are currently on teams matched up in the Western Conference Semifinals. His teammate for the last three season, Jarron Cumberland, was named the AAC Player of the Year in 2019 and is an NBA prospect as well.

To get a better understanding of what Brooks will bring to the Hurricanes, let’s take a deeper look at some of the numbers.

Ever since he set foot on campus at Cincinnati, Nysier Brooks has shown the ability to block a shot or two (or three). For his career, Brooks has averaged 2.6 blocks per 40 minutes, which is a big number.

Watch Brooks on this play from his freshman season: He goes from doing jumping jacks in front of the baseline passer to beach volleyball-style smashing the shot to running the length of the floor for a potential rebound opportunity.

Brooks doesn’t jump camp around the basket, looking for blocks and rebounds, though. He’s an active defender who will guard smaller players out above the 3-point arc. The former Bearcat puts his wingspan to good use in these situations — staying wide and moving his feet.

As a junior, Brooks was named Cincinnati’s Defensive Player of the Year. However, he offers some utility on the offensive side of the floor, too. While playing 23 minutes per game, Brooks averaged 8.1 points per contest on 53.5 percent shooting (56 percent true shooting).

Brooks has yet to attempt a 3-pointer in college; the vast majority of his offense comes around the around, although he’s shown some touch from the midrange. According to Synergy Sports, Brooks shot 59.5 percent and scored 1.22 points per possession on non-post-up finishes at the basket.

Brooks has good hands, which pair well with his long, athletic frame; it feels like he should be a natural fit in Miami’s screen-roll game with star point guard Chris Lykes.

Larranaga and the Hurricanes love to play late into the shot clock and force opponents to defend through a variety of ball screens — side angle, high and flat. With two years of eligibility remaining, Lykes is the current and future engine of this offensive attack, too.

Over 31 percent of Lykes’ possessions were used via pick-and-roll, per Synergy: 0.91 points per possession (52.3 eFG%), which ranked third in the ACC (minimum 100 possessions). He hit those marks despite constant defensive attention from much larger opponents: blitzes, traps, double teams — you name it.

Teams won’t stop showing Lykes these levels of defensive pressure unless Miami’s other perimeter options emerge as secondary creators or shooters; however, Brooks could at least help by drawing gravity to the middle on his basket rolls.

Brooks shot 69.6 percent and scored 1.28 points per possession on basket rolls this season, according to Synergy.

With Brooks, the rim protection and basket dives already add up to a pretty good center prospect. However, he adds a few more things of value that are worth a quick note. Brooks is a strong offensive rebounder, and he took his activity on the glass to a new level in the 2018-19 season.

While on the floor, Brooks posted an offensive rebound rate of 13.6 percent, which ranked inside the top 35 nationally, per KenPom. During conference play, that number launched to 15.5 percent — No. 1 in the AAC.

According to Synergy, Brooks shot 54.5 percent on put-back attempts after an offensive rebound this season. Miami will need even more of this production.

And finally, Brooks showcased the ability to draw fouls at a high level: five fouls drawn per 40 minutes, according to KenPom. Brooks attempted 133 free throws this season (6.6 FTA per 40 minutes) to 185 field goal attempts; this translates to a free throw attempt rate of 72 percent, which is rather high.

Brooks isn’t an amazing free throw shooter; he’s hit just 61 percent of his 202 career attempts from the line. But drawing fouls is still a valuable skill, and one that Lykes, Larranaga and Miami will be pleased to have in the fold.