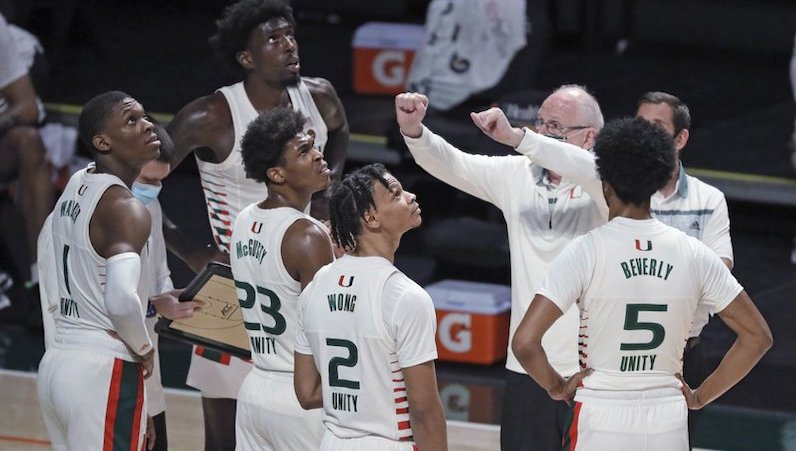 Miami coach Jim Larranaga talks with players as they look up toward the board showing the Hurricanes trailing Purdue during the first half of an NCAA college basketball game Tuesday, Dec. 8, 2020, in Coral Gables, Fla. (Al Diaz/Miami Herald via AP)

Elijah Olaniyi, a key rotation piece for Miami in the 2020-21 season, plans to transfer. Stadium’s Jeff Goodman was the first to report the news.

After scoring over 1,100 points during three seasons at Stony Brook, the 6-foot-5 Olaniyi transferred to Miami last May.

During Olaniyi’s one season with the Hurricanes, he started 18 games, while averaging 10.5 points and 5.1 rebounds per game. Olaniyi made 21 3-pointers this season (26.3 3P%); he’s a versatile piece and a good athlete.

Miami’s Elijah Olaniyi is transferring, source told @Stadium Averaged 10.5 points and 5.1 boards this past season. Was previously at Stony Brook.

Olaniyi is the third Miami player to transfer out of the program over the last two months; freshmen forwards Matt Cross (Louisville) and Earl Timberlake also departed.

Talented freshman forward Earl Timberlake will transfer out of Miami