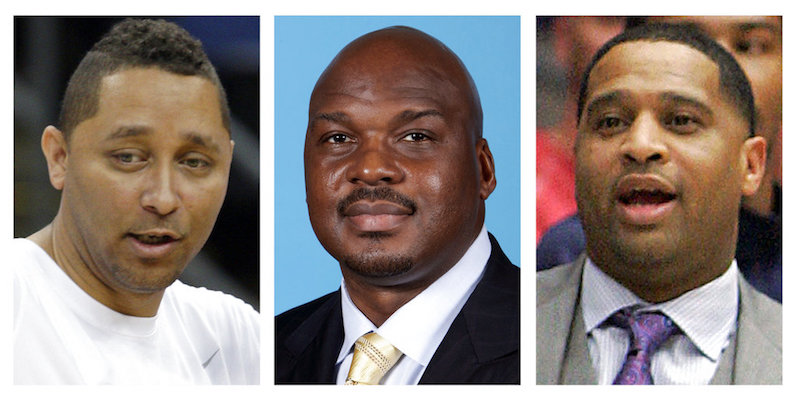 ssistant basketball coaches Tony Bland, left, Chuck Person, center, and Lamont Richardson. The three, along with assistant coach Lamont Evans of Oklahoma State, were identified in court papers and are among 10 people facing federal charges in Manhattan federal court, Tuesday, Sept. 26, 2017, in a wide probe of fraud and corruption in the NCAA, authorities said. (AP Photo/File)

On Tuesday morning, NBC broke news that the FBI arrested multiple college basketball coaches have been arrested in a corruption scheme.

The U.S. Attorney’s Office for the Southern District of New York released a statement involving charges of bribery and fraud. The investigation has gone on since 2015.

In one part of this case, assistant coaches at four Division I schools — Auburn, USC, Arizona and Oklahoma State — are alleged to have taken cash in an effort to guide college players towards certain sports agencies and financial advisors.

Additionally, according to the FBI, Jim Gatto — the head of global sports marketing at adidas — funneled money to high school players to go to adidas schools; in turn, those players would then sign with adidas after going pro.

Gatto isn’t the only powerbroker mentioned in this, though. Several other other names pop up, including Merl Code — another adidas executive.

It’s important to remember, too, that this is much more than a standard NCAA investigation. Bribery is a federal crime; punishment would likely extend beyond simply losing one’s job. The FBI, unlike the NCAA, also has subpoena power.

Two ACC programs that also have apparel deals with adidas — Louisville and Miami — appear to be involved in the scandal as well.

Sounds an awful lot like Louisville will be one of the schools impacted. From this: https://t.co/cfImbKPdeN pic.twitter.com/ROWCy5Ewzc

The biggest commitment in Louisville’s 2017 class is 5-star wing Brian Bowen. A likely one-and-done candidate, Bowen is a relatively new commit, too; he pledged — seemingly out of the blue — back to the Cardinals in early June. It looks as though federal authorities are indicating that his family received around $100,000 to attend Louisville, which is already on probation.

Bowen was a late addition for Louisville — committed to the Cardinals less than four months ago, back in early June. https://t.co/XhVEF8gnMi

UPDATE (3:16 P.M.) — According to Jon Rothstein of CBS Sports, Louisville has received a notice that it’s under an investigation rom the FBI.

Louisville has received official notice that it is under FBI investigation, per release.

Louisville doesn’t seem to be alone, though.

According to the documents, an “apparel company” sent $150,000 to a program that appears to be Miami to land a commitment from an unnamed player.

The investigation is ongoing; stay tuned for more updates.

Georgia Tech plans to part ways with Russell Athletic in 2018