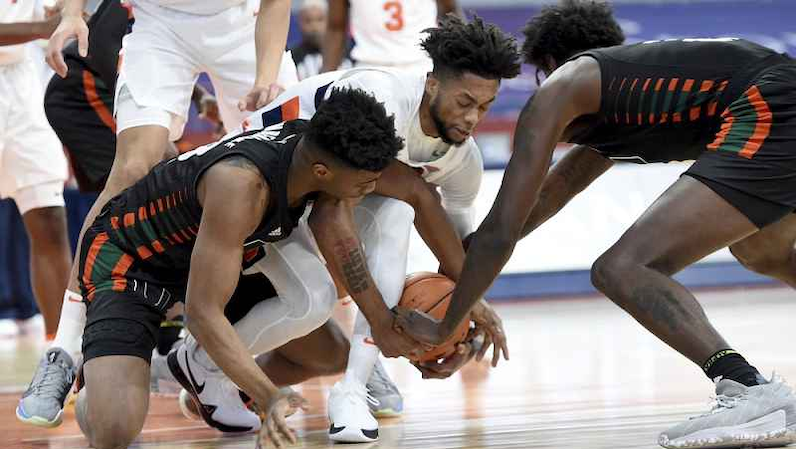 One of the most talented players in the ACC is on the move. Miami freshman wing Earl Timberlake plans to transfer, according to a report from ESPN.

The 6-foot-6, 215-pound Timberlake arrived in Coral Gables as one of the top 2020 prospects. However, injuries (ankle and shoulder) largely derailed his freshman season. Timberlake appeared in only seven games (three starts); he averaged 9.3 points, 5.0 rebounds, 2.4 assists and 1.7 steals.

A product of the famed DeMatha Catholic High School, Timberlake committed to Miami over a host of programs, including Pittsburgh.

According to Timberlake, there are no hard feelings with Miami; he just wants a fresh start somewhere else.

As far as testing the NBA Draft waters goes, Timberlake has no intentions of going through that process while also in the transfer portal: “I need to get back to being the real Earl Timberlake before I can think of taking the next step in my career.”

BREAKING from me and @DraftExpress: Miami freshman Earl Timberlake plans to transfer, he tells ESPN.

Timberlake was a projected first-round pick before dealing with injuries all season. Immediately becomes a top available transfer.https://t.co/Od8t42dnc3

The move from Timberlake continues a string of bad breaks for Miami, too.

Miami entered the 2020-21 season with fairly high expectations; after a few years of struggles this was supposed to be the bounce-back. The Hurricanes had multiple pick-and-roll playmakers: Isaiah Wong, Chris Lykes, Kam McGusty and Harlond Beverly. Big man Nysier Brooks was eligible after a redshirt/sit-out season. Plus, an infusion of freshman talented arrived: Timberlake and Matt Cross, another 4-star forward.

Before the season wrapped up, Cross left the program. He’s now set to join Louisville for the 2021-21 season. (Cross is a really promising stretch-4 prospect who shot 40 percent from deep this season.)

Now, Timberlake will also leave. A supremely gifted athlete and defender, Timberlake becomes a highly-coveted name on the transfer circuit.

The Hurricanes must also deal with an upcoming NBA Draft decision from Wong, an All-ACC selection this season and one of the country’s top pick-and-roll scorers. Beyond that, it will be interesting to see what Lykes, Brooks and McGusty do. All three are seniors. However, they have the option to play another season of college ball — at Miami or somewhere else — if they so chose.

Cross moves from Miami to Louisville