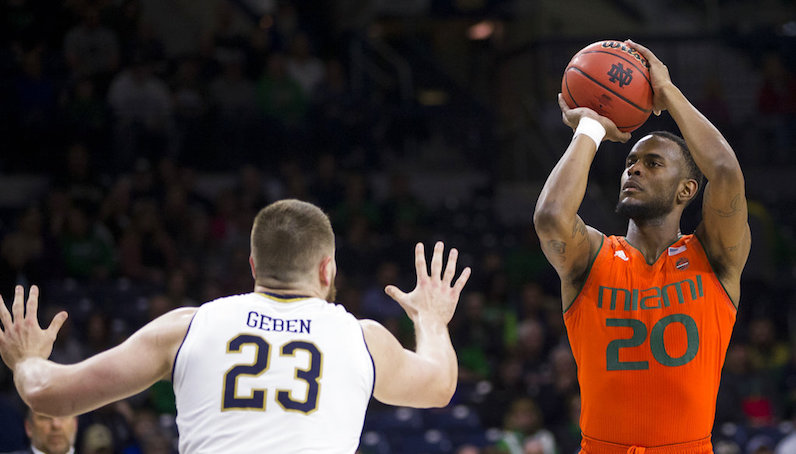 An up-and-down basketball season for Miami just hit another bump, and it’s a big one. According to multiple reports, junior power forward Dewan Hernandez has been declared ineligible by the NCAA.

Hernandez sat out Miami’s first dozen games while on appeal — as the Hurricanes went 8-4, including some head-scratching losses. His ineligibility sprang from a connection to the FBI investigation into corruption in college basketball — along with the shoe company adidas. Hernandez’s name was mentioned in court fillings.

Back in the middle of December, Hernandez hired an attorney, too, in the hopes of expediting the process. That attorney, Jason Setchen, was not pleased with the decision. Via the Miami Herald:

I disagree with the determination made by the NCAA. In my opinion, they have implied facts and drawn conclusions without sufficient support in the record to justify such conclusions. It is very unfair to Dewan. I am discouraged by the decision. I genuinely believed they’d treat him fairly and reinstate him. Unfortunately, that is not the case.

One of the biggest commitments in program history, Hernandez become a prime pick-and-roll target for Miami as a sophomore. He was a nice fit next to Miami guards, like Chris Lykes and Bruce Brown, as a rim-running source of offense. After the 2017-18 season — when he averaged 11.4 points (60 percent true shooting) and 6.7 rebounds — Hernandez tested the NBA Draft waters, but decided to return to school.

Hernandez was actually one of Miami’s two player representatives at ACC Operation Basketball in Charlotte — along with Anthony Lawrence; however, the day of Miami’s first game (Nov. 9), the team decided to hold him out. Now, just before the Hurricanes launch ACC play against NC State, he’s been officially ruled as ineligible.

If Hernandez wants, he could appeal one final time; however, the 6-foot-10 Floridian could opt to just start prepping for the 2019 NBA Draft, too.

According to Setchen, the attorney of Dewan Hernandez, Miami will appeal and look again for reinstatement. Hernandez has now missed the first 13 games for Miami (8-5), which fell Thursday night to NC State, 87-82.