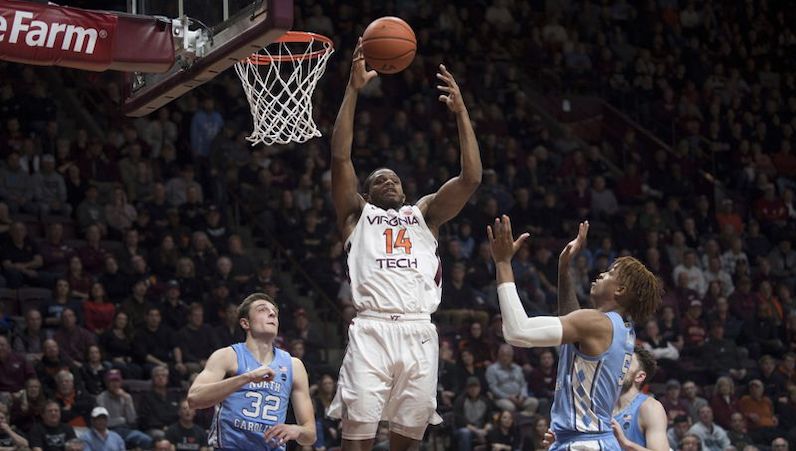 PJ Horne is involved in one of the more under-the-radar-yet-important departures in the ACC this offseason. Obviously, there’s a great deal of roster turnover around the league; some player have readied themselves to head to the professional ranks, while the conference has also seen the transfer portal both giveth and taketh. Earlier this week, Horne officially entered the NCAA transfer portal.

Horne’s box score numbers likely won’t blow anyone away. In his first season as a full-time starter, Horne averaged 7.6 points, 4.2 rebounds and 0.7 blocks per game. However, this goes beyond simple counting stats. Horne acquitted himself nicely into Mike Young’s spacey offense, emerging as an impactful stretch-5.

Horne wasn’t just a standstill spot-up shooter. He showed some movement shooting skills as well, including the ability to come off pindowns and look for his jumper. With a guard (Hunter Cattoor) screening, this is a really tough action to defend for opposing centers, like Vernon Carey Jr.

At 6-foot-6, Horne is a little undersized for the center position, although that’s all relative. What Horne lacked in height, he made up for in his ability to stretch the floor.

Horne offered some rim protection, too: 0.9 blocks per 40 minutes this season. Going back to the 2007-08 season, Horne is one of 22 ACC players with 2.5 percent block rate, 1.5 percent steal rate and 34 3P% (100+ 3PA). These are fairly generous filters to use, but it gets the point across: Horne brought some interior defense with his stretch on offense.

Virginia Tech’s offense features a plethora of detailed off-ball movement, screening actions and various reads those exchanges create. This is where Horne provided serious value. He’s a physical screener, one that looks to make contact with defenders, which is a necessity to consistently free up shooters. As a freshmen, Jalen Cone (1.11 points per possession off screens) and Hunter Cattoor took advantage.

While the Hokies utilized Horne as a screener to create offense for others, the action didn’t stop there; secondary offense would develop after those pindown and flare screens. In turn, Horne turned into one of the top pick-and-pop players in the country.

According to Synergy Sports, Horne scored 1.26 points per possession (63 eFG%) on pick-and-pops, which ranked No. 8 nationally (30+ possessions) and tops in the ACC.

From their diamond floppy action, the Hokies get a wide-open catch-and-shoot 3 for Horne after he pops into space while Louisville doubles Cone.

Cone is a nuclear shooter and a tireless mover without the basketball. When Cone drew extra attention, Horne made for a nice release valve.

When we think of pick-and-pop action, the first image that generally comes to mind is an on-ball screen — from a simple spread middle ball look. There are other variations of this, though. Within the ACC, Miami uses a lot of double drag screens to generate pop action; NC State and Duke (Miami also) will look for it out of 1-4 high sets and side ball screens

However, some coaches also find ways to flow into pop actions with a variety of off-ball patterns and movements. Young mixes this in at Virginia Tech.

For years, we’ve seen Tony Bennett and Virginia get to screen-pop looks out of their blocker-mover offense. (With Sam Hauser eligible and a Jay Huff a possibility to return, get ready to see a fair share of this next season with UVA.)

These actions can be tricky for defenses to navigate. They require sound communication from both defenders; timing is critical. It’s all too easy for little bits of airspace to open up when a help defender is drawn to a second location 15-20 feet away.

Keep an on Garrison Brooks in the clip above. Kihei Clark is a master at probing defenses off a live dribble, drawing help and kicking to open teammates. After coming around the initial boomerang screen from Mamadi Diakite, Clark reverts and comes off a pindown from Diakite.

Clark, as he’s one to do, drives baseline off a little brush screen from Diakite. With Cole Anthony in trail, Brooks shows for a bounce, but with Diakite popping (36.4 3P%) and a hesitation dribble from Clark, he feels pulled out to the arc. This gives Clark, who has a step on Anthony, clearance to lift for a scoop layup.

With Horne and Landers Nolley gone, though, the Hokies don’t have another obvious stretch frontcourt option.

Keve Aluma, who followed Young from Wofford to Virginia Tech, is solid asset and eligible to play this season; however, 99 percent of his career field goal attempts have come from inside the arc. Earlier this offseason, VT added Iowa grad transfer Cordell Pemsl. Similar to Aluma, Pemsl is a physical presence who offers rebounding and screen-setting. During his time at Iowa, though, Pemsl attempted just four 3-pointers — one percent of his career field goal attempts.

As a freshman, John Ojiako had some nice moments has a long-armed rim-runner (77.4 FG% at the rim) and defensive presence (8.8 percent block rate). He can make an impact on the offensive glass, too: 12.5 percent offensive rebound rate. Ojiako even showed some isolated post-up game, though he’s still raw in this capacity.

This trio should help a Virginia Tech roster that ranked nearly dead close to last nationally in average/weighted height: No. 344. The Hokies also ranked 340th in offensive rebound rate: 21 percent. Some of this is by design, with a greater emphasis on getting back for defense, as opposed to hitting the glass. (VT was a solid defensive rebounding squad, too, for whatever it’s worth.)

In 189 combined games as collegians, though, Pemsl, Aluma and Ojiako have attempted a combined five 3-pointers. Opponents don’t have to worry about honoring their jump shots. That’s not the case for Horne, who made opponents guard out beyond the arc. Even with a miss, there’s value here.

Virginia Tech still has plenty of shooters, make no mistake. This, however, makes it more of a challenge to get four (or more) good 3-point shooters on the floor at the same time. For the Hokies, this is especially noteworthy because of another key offensive asset: Tyrece Radford.

Recruited to Virginia Tech by Buzz Williams, Radford emerged as a unique offensive force during his redshirt freshman season. At 6-foot-1, Radford stands out: he’s a weirdly good finisher around the basket. And despite playing guard in an offense that chucks 3s (nearly 48 percent of the team’s field goals this season), Radford attempted just 12 3-pointers this season (1-of-12 3PA).

Tyrece Radford cutting into space, going left with some pace, is damn near unstoppable. Strong, good touch/use of angles.

These are just monster numbers from a player under 6-foot-7, and Radford is well below that height. Radford posted this type of efficiency without being able to play over the top of defenders, dunking on everything in sight. He finished with just 8 dunks this season.

Radford’s a hard driver and cutter, especially when he can get to his preferred left hand; according to Synergy, Radford shot 75 percent on basket cuts this season.

He uses his quicks and power — along with some nice touch around the hoop — to get in place and finish effectively. During the season, Radford did mean things to guys like Markell Johnson and Alex O’Connell.

In the next clip, look at who screens for Radford and pops after the pick. It’s Horne, who is actually open after Radford’s curl. Defensively, Carey is there; this is just an exquisite finish from Radford.

Radford has some off-dribble shot creation/pull-up elements to this game (featured in the Louisville game); however, when he puts the ball on the deck, it’s normally to get to the rack. Horne allowed Virginia Tech to play 4-around-1 offense — with the one inside man a 6-foot-1 dynamo.

On this possession — form a horns set — Horne gets the ball and the elbow and sets up for side screen-roll with Wabissa Bede. Bede rejects the screen as Horne then moves to set a look-back screen from Nolley. As that’s happening, Radford cuts against the grain and has space/time to finish with Horne pulling Manny Bates, the league’s top shot blocker away from the hoop.

(These are actions and sets that Horne would’ve partnered well with Cartier Diarra.)

Here’s one of the sets VT uses in guard-heavy lineups to clear out the floor for Radford and his north-south drives. Virginia Tech starts in a horns set — with Horne and Naheim Alleyne at the elbow areas. Bede dribbles to Horne’s side; he lifts and looks to receive the ball. As that happens, Alleyne sets a pindown for Cone, who immediately sprints into a dribble handoff (DHO) with Horne. This is known as Chicago action: pindown into the DHO.

All of this puts the defense through some rotations and exchanges before the Hokies essentially isolate with Radford on the left side of the floor. Keep an eye on how Horne forces Miami’s defense to cover more ground, as opposed to Ojiako.

Again, Horne proved to be a critical element for spacing the floor around Radford’s knifing penetration or hard cuts. This doesn’t mean that Virginia Tech won’t be able to find these channels for Radford in the 2020-21 season. Young may need to get a little more creative, though.

While Horne is a useful offensive player, he obvious limitations, too. A low-usage player (15.5 percent career usage rate), Horne rarely got to the free throw line, especially as he started to play further from the basket — just 1.2 free throw attempts per 40 minutes the last two seasons. He isn’t the post threat/magnet for contact that Kerry Blackshear Jr. was for the Hokies — 8.7 free throw attempts per 40 minutes in the 2018-19 season.

In terms of assists, well, there isn’t much to add, either. Horne averaged 0.6 assists per 40 minutes during his career at Tech: 23 total assists in over 1,600 career minutes. (Blackshear was an excellent assist man, too.)

Despite those limitation, Horne (in a smaller sample) has been a solid pick-and-roll player and rim finisher. Horne shot close to 74 percent around the hoop this season.