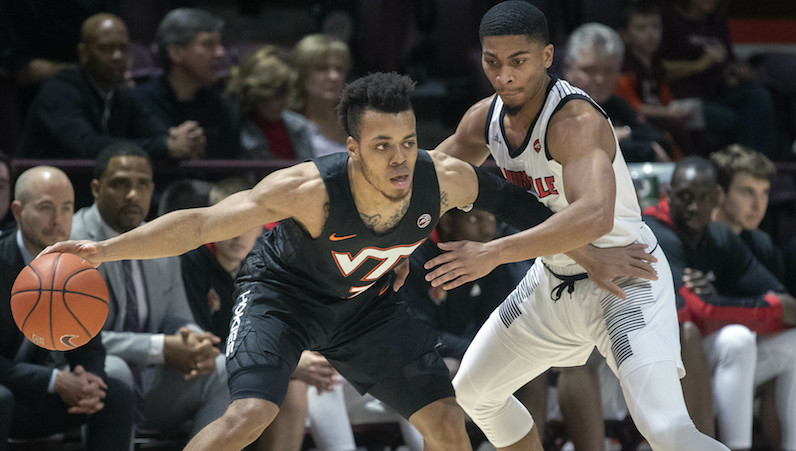 On Monday night in Blacksburg, Louisville defeated Virginia Tech in a matchup of top-20 team, 72-64. The Cardinals were led by Dwayne Sutton, again: 17 points, nine rebounds and four assists. He’s a good basketball player, you guys. Before moving on to Tuesday’s slate of four ACC games, let’s look back at what went down inside The Cassell.

One of the reasons why this team is so much fun to watch is the proficiency from 3-point range. Louisville is completely unafraid to let it fly from deep; in fact, 42.8 percent of the team’s field goal attempts have come from beyond the arc — No. 80 in the nation, the fifth-highest rate in the ACC. During ACC play, that number has jumped to 44.1 percent.

This team has a lot of weapons from beyond the arc, too; it’s not a one-man attack, although Jordan Nwora (39.7 3P%) leads the charge. According to Synergy Sports, Louisville scores 1.19 points per possession on catch-and-shoot attempts (59.6 eFG%) in the half court — good for No. 20 in the nation.

Nwora, Sutton (39.5 3P%) and Christen Cunningham (38.2 3P%) all score above 1.06 points per possession on spot-ups, per Synergy. When Nwora shoots right off that catch from a spot-up possession, he scores 1.48 points per possession (72.8 eFG%), which ranks third in the ACC — behind only Ty Outlaw and Cameron Johnson.

Screen assist to Khwan Fore who steps in nicely to free Nwora up for a clean catch-and-shoot look. Louisville also likes to run offense through Nwora out of this really simple horns set. On this play, Nwora hits a really tough shot over the outstretched Kerry Blackshear Jr.

The Other Money Area

Louisville also does a good job attacking defenses and getting to the free throw line. The Cards rank 30th nationally in free throw attempt rate (40.5 percent). That number has dropped considerably in ACC play, though: 29.4 percent, according to KenPom.

Obviously, Virginia Tech isn’t the same offensive machine without Justin Robinson. As good as Nickeil Alexander-Walker is, and he’s really awesome, the Hokies miss Robinson’s spot-up shooting (60.1 eFG%) and ability to collapse a defense out of the pick-and-roll — sometimes with expert-level double team splits.

Back on Saturday, Virginia Tech scored under 0.89 points per possession — their second-worst outing of the season. Also from that game: Tech went just 4-of-13 on spot-up attempts (30.7 FG%) and recorded more turnovers (12 total, 22.6 percent turnover rate) than assists (8).

In terms of offensive efficiency, those numbers fall short of Virginia Tech’s lofty standards, but that’s workable. Here, again, Tech plays through a Blackshear post-up, which lets to another hit for Alexander-Walker (63.6 eFG% off the catch) after he relocates.

This was the play of the game for Alexander-Walker, who continues to flash vision as an ambidextrous passer. For the season, Tech has scored 0.97 points per possession when NAW shoots or passes out of the pick-and-roll.

When Justin Robinson passes out of the pick-and-roll, though, Tech scores 1.11 points per possession. This is stating the obvious, but for the Hokies to hit their potential, a healthy return for Robinson is imperative.