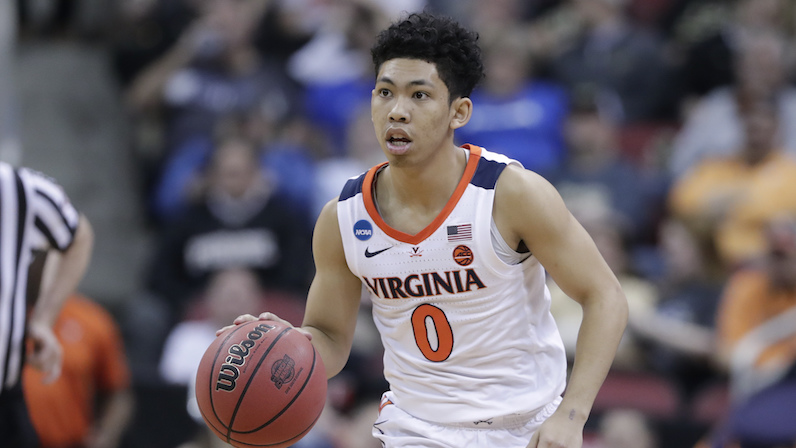 Well, it wasn’t exactly pretty, but Virginia got the job done — a 53-49 victory over Oregon to advance to the Elite Eight for a date with Purdue. On a night when De’Andre Hunter and Kyle Guy — first team All-ACC players — went a combined 3-of-17 on 3-point attempts, and UVA scored just 0.97 points per possession, Tony Bennett’s club still found a way.

Down in the engine room, Kihei Clark and Ty Jerome went to work, and put forth a gutty performance that now has UVA on the precipice of another Final Four. Let’s take a quick look at how this team — against Oregon’s swarming, wacked-out defense (quacked-out?) — got the job done.

Virginia is normally poised in its half-court offense — attacking man-to-man looks with its continuity ball screen approach or the go-to mover-blocker/sides offense. The Cavs normally crush conventional defenses, including zone looks. When all else fails, throw the ball to Dre Hunter and let him work.

Oregon was anything but conventional, though. Dana Altman’s scrambling/hybrid matchup zone was constantly evolving — a multi-pronged mechanism that involved full-court pressure, at times, and man-to-man concepts, too. It was like a great tennis player mixing up his or her serves — different spins, speeds and ball locations.

The shapeshifting Ducks altered the approach multiple times — sometimes across the same possession. This along with Virginia’s Pack Line ground the game to a halt: 55 possessions, per Bart Torvik.

Oregon’s defense pressed up and there were pockets to attack, especially along the back line and in the corners. Even then, Oregon shut some stuff down with extra defenders; to counter, Virginia simply had to make some shots.

Oregon’s speed and length is an impossible combination to ignore — and that’s not just because of the neon green uniforms. There was one stretch of the first half when Virginia missed 14 of 15 shots. The ‘Hoos scored all of 23 points in the second half, too. (Multiple times I thought myself during this game just how frustrating it must be to get ready for this defense with only a few days to prepare.)

In some categories, though, Virginia did just fine against Oregon’s quicks and size. Virginia didn’t get to the rim much (more on that later), but high-flying Kenny Wooten blocked only one shot, and UVA turned the ball over just eight times (14.5 percent turnover rate).

On some possessions, you could see Virginia try to get to some of its primary half-court man-to-man sets (CBS and sides), but the normal reads weren’t quite there, and it was up to Ty Jerome and Kihei Clark to create.

Guard Play: When The Moment Isn’t Too Big

I’m not sure if its irony or some weird form of poetic justice, but whatever it is: 5-foot-9 Kihei Clark proved pivotal against an Oregon team that starts four 6-foot-9 guys and ranks 16th nationally in weighted average height, per KenPom.

There have certainly been ups and downs for Clark this season; that tends to be the case with a lot of freshman point guards, by the way. However, what was obvious in this season’s first game — a win over Towson — was back on display against Oregon. While he may be limited, Clark adds a spark of playmaking to Virginia’s offense.

Clark puts pressure on opposing defenses with his on-ball drives, which serve to create looks for his teammates. The freshman guard did his thing — dishing out six assists in 37 minutes. He’s up to six assists per 100 possessions this season, now. Clark also found his own offense, too (12 points) — rejecting the screen from Mamadi Diakite and finishing with a floater over a swooping Kenny Wooten.

Two of his 3-point hits come off assists from Ty Jerome, who finished with six dimes as well — in another monster performance. Jerome poked and prodded at Oregon’s defense with probing curls into the lane, which produced this second Clark triple.

Late in the game, though, with the clock seemingly approaching midnight on Virginia’s charmed season, Clark stepped up, again. Watch Clark move without the ball here around another Jerome drive; he looks like Kyle Guy, sprinting off a down screen for Diakite, and quickly shooting from deep against a closeout from the 6-foot-5 Will Richardson.

To win in March requires excellent players, daring shot-making, team defense and a good bit of luck, too. Coaching can certainly help as well. For a team to cut down nets, though, an unlikely hero or two needs to emerge. Clark may have had his night on Thursday against the Ducks.

However, at this point of his career, brilliance from Ty Jerome is anything but a surprise. In fact, it’s expected. (When his time is done in Charlottesville — whenever that may be — this dude is going to make some NBA team drafting at the back of the first round very happy.)

With Hunter’s offense struggling, it was up to Jerome to create when nothing else existed. He’s the one other dude on this roster that can get a bucket out of nothing.

Trailing by two after a Louis King score, Bennett and Virginia went to Jerome to go get his own shot out of the under-eight media timeout. According to Synergy Sports, Jerome shoots 46 percent this season (45.1 3P%) when UVA is in a two-possession game (+/- six points).

Jerome played 39 minutes against Oregon; he scored 13 points (22.5 percent usage, three 3-pointers) and assisted on 41 percent of his teammates’ field goals while on the floor. The six assists he posted don’t tell the full story of his floor game, though. (One of Clark’s assists — a layup for Hunter after Wooten was pulled away from the basket — came after Jerome got the ball to that side of the floor.)

As usual, Jerome got to his off-ball rhythm shooting, too. Jerome, like Guy, is special at shooting on the move, which he pairs with big-time range.

After a Diakite steal and the game tied at 45, UVA ran the clock down and went to one of its pindown looks. Jerome ran off Hunter and drilled what proved to be the game-winner.

Something To Watch: Cross-matches, PNR Defense

Now, Clark didn’t get off scot-free, either. Oregon attacked him with size mismatches, like the 6-foot-9 King, and found some rare easy offense. It’s what Florida State did down in Charlotte at the ACC Tournament semifinal, too. This is something that UVA must get ready for with Purdue.

I’d bet Virginia will look to keep Clark on 6-footer Carsen Edwards, but there will be cross-matches and switches; Clark must be able to hold up against a Purdue club that starts two 6-foot-6 guys on the wing, and ranks 24th nationally in average height. (It certainly helps to have Diakite patrolling as a help defender, though.)

As was discussed in Virginia’s first round win over Gardner-Webb, which saw the Bulldogs hold a 14-point lead at one time in the first half: UVA must be mindful of how teams counter the hard hedges on ball screens. GWU split and slipped screens with some success — before Virginia adjusted.

On Thursday, Oregon created a few good looks — albeit not many — with similar tactics. This Ehab Amin 3-ball comes as a result of Wooten’s slip. Wooten (5.2 percent assist rate) isn’t going to make a play for a teammate in space, but his dive to the rim still draws gravity.

This is covered up pretty well on the back by Hunter and Jerome, but Amin still gets a decent catch-and-shoot opportunity.

Now watch this: Less than a minute later, but after a timeout — Diakite doesn’t hedge as hard. He shows to the level of the would-be screen, but that’s as far as he goes. Diakite recovers without any forced rotations from Virginia’s defense. Payton Pritchard scores, but it was a tough one-on-one shot.

Earlier in the week, I previewed this game with Spencer Percy from Queen City Hoops. In that piece, we discussed Virginia’s center rotation. Both of us agreed: If given the choice, in leverage minutes, Tony Bennett will ride with Mamadi Diakite over Jack Salt and Jay Huff.

It’s good that Virginia has options; there are three centers on the roster, and all of them bring something of different value to the table. However, last night was another coming out party for Diakite, who played a career-high 35 minutes. Counter to that, Huff and Salt played a combined five minutes off the bench — recording one rebound (Salt). In total, the bench plenty just 12 combined minutes in this game.

(Side note: man what a great play from Clark there.)

As he has all season, the bouncy Diakite provided rim-to-rim activity. Considering his ball-screen responsibilities and rim production on both ends, this dude covers serious ground — even in a slower-paced game.

Oregon’s energetic defense afforded Virginia just 12 attempts at the rim: 6-of-12 field goals. Diakite accounted for 50 percent of this production, including one dunk: 3-of-6 shooting at the rim.

On the other end, Oregon was just 4-of-9 shooting at the rim against Virginia’s Pack Line. When the Ducks got a look inside the restricted area, it was sent back twice by Diakite (9.4 percent block rate this season).

Diakite’s second reject — pinning Paul White’s layup on the glass — was a thing of beauty, too. After no blocks against Gardner-Webb, Diakite has five in the NCAA Tournament — all against Oklahoma and Oregon.