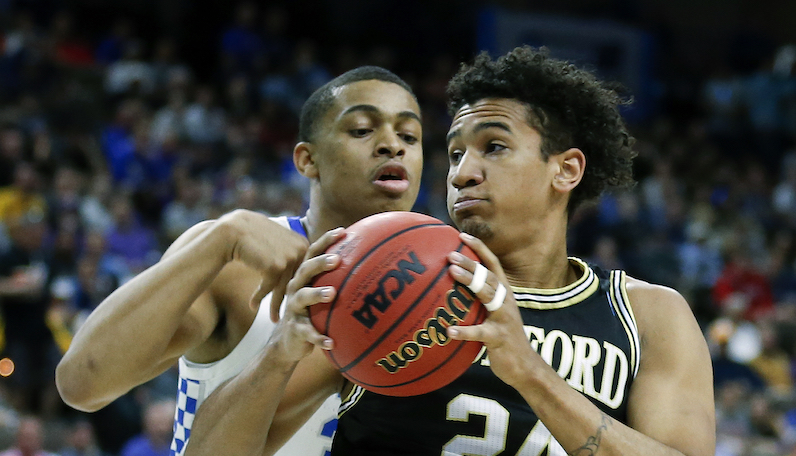 Wofford forward Keve Aluma (24) looks for a path to the basket against Kentucky's Keldon Johnson during the first half of the second round of a men’s college basketball game in the NCAA Tournament in Jacksonville, Fla., Saturday, March 23, 2019. (AP Photo/Stephen B. Morton)

After playing under Mike Young for two seasons at Wofford, power forward Keve Aluma has decided to follow his coach to Virginia Tech, too.

In a low-usage role (13.7 percent usage rate), Aluma was an efficient player for Young and Wofford. Nearly 99 percent of Aluma’s field goal attempts were of the 2-point variety; he shot 66.7 percent from the field, which translated to an effective shooting clip of 64.3 percent.

With Aluma’s help, Wofford went 30-5 this season, earned a 7-seed in the NCAA Tournament and nearly pulled off a second-round upset of Kentucky.

Currently, Aluma is on track to sit out and redshirt during the 2019-20 season; however, there’s alway the possibility that he could receive a waiver.

After entering the transfer portal, Landers Nolley to remain at Virginia Tech