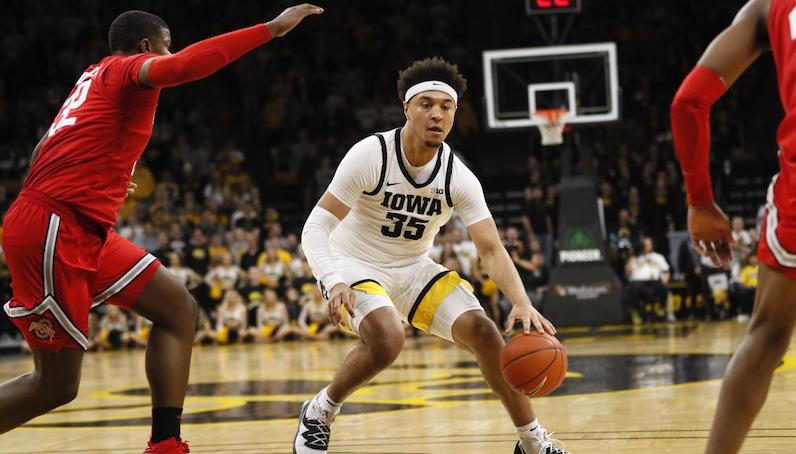 Cordell Pemsl brings size and rebounding prowess to Virginia Tech — both of which are in demand in Blacksburg. During the 2019-20 season, the Hokies ranked nearly dead last in nationally averaged/weighted height: No. 344 in Division I. Virginia Tech also ranked 340th in offensive rebound rate: 21 percent.

Part of this is a matter of design. Mike Young and the Hokies want to spread the floor with shooters, occupy coverages with detailed off-ball actions and play into space — attacking gaps with Tyrece Radford (63.3 FG%). PJ Horne played at the 5 a lot this season. He adjusted nicely to his new role as a floor-spacer: 45-of-129 3PA. But being spaced out to the 3-point line doesn’t necessarily mean you’re in ideal offensive rebound space — around the basket, on the weak side.

Again, this has to do with design and strategy: when a shot goes up, get back on defense, hence the lower offensive rebound rate.

Young also inherited a program that, in years prior, played plenty of 4 or 5-out basketball. Kerry Blackshear Jr. was the only true interior offensive presence over the two previous seasons, and KBJ could step away and makes plays in space, too. (Of course, those offenses under Buzz Williams were brilliant and wickedly efficient.)

Despite a lack of overall size this season, Virginia Tech still did well on the defensive glass; opponents rebounded less than 26 percent of their missed field goals.

Virginia Tech, however, will have more power in its frontcourt next season. After redshirting this season, Wofford transfer Keve Aluma — who followed Young to VT — will join the rotation. The 6-foot-9, 240-pound Aluma doesn’t stretch the floor like Horne; over 99 percent of his career field goal attempts have come inside the arc. However, he’s a strong on the glass — 12.9 percent career offensive rebound rate — and efficient in the paint: 71.4 FG% at the rim.

(Earlier this week, VT landed a commitment from 3-star 2020 PF David N’Guessan, too.)

Now there’s Pemsl, too. The 6-foot-9 Pemsl appeared in 96 games during his four years with Iowa. His career stats aren’t gaudy: 16.3 minutes, 5.9 points and 4.3 rebounds per game. In terms of scoring production, his best season came his freshman year: 8.9 points per game (62 2P%) in less than 20 minutes of action.

Some of Pemsl’s other numbers are interesting, too. He has a career defensive rebound rate of 20 percent, which is strong. During the 2019-20 season, as a part of the Luka Garza Show, Pemsl dished out 3.8 assists per 40 minutes. That’s solid for a big guy, and feels like something Young can incorporate into his offense.

Pemsl also brings a toughness to Virginia Tech’s frontcourt, which can be put to good use. Young’s offense features a maze of screening actions and misdirections. With sophomore guard Jalen Cone, the Hokies also have one of the best movement shooters in college basketball: 59.2 eFG% off screens, 66.4 eFG% on spot-ups, according to Synergy Sports.

For guys like Aluma, Pemsl and John Ojiako, their offensive focus should be on ensuring that Cone — who is incredibly zippy flying around screens — has as much space the work with as possible. Hunter Cattoor, another rising sophomore, has promise as a movement shooter (40.2 3P%). Cone and Cattoor working in off-ball pairs is a dangerous combination, especially if Virginia Tech’s bigs dig in on their screening efforts.